Mandeville, LA – Exclusive Transcript – Again, if the State of Georgia, in the constitutional world, is paying for its public transportation, that’s their business.  You can’t tie every argument back to the illegal and unconstitutional dispensation of funds from the federal monster.  If that’s the point of view of the argument, then I can end this right now and say everybody that wants a one-size-fits-all universal policy because we have federal distribution of welfare and transportation moneys, then that’s what you get.  Check out today’s transcript for the rest…

AG:  Let’s say Georgia has a huge Spanish population because of the idea that their residents have ties back to the country of Spain, so they’re bringing untold amounts of Spaniards into the State of Georgia.  The concern I have is, if Georgia is then applying for federal highway grants, federal education, things like that where they are going to get a disproportionate amount of federal money based on the size of the population within that state, and the size of the population of that state is only so large because of “lax” laws in terms of having foreigners come in, then we get back to the same point that we’ve talked about before.  Are you penalizing the other 49 states if one state has an incredibly lax immigration policy in terms of alien friends?

Mike:  I don’t think you should count your alien friends as your citizens.

AG:  Even if you don’t, you’re going to have children born here from alien friends.  They’re going to be using public transportation, things like that.

Mike:  Again, if the State of Georgia, in the constitutional world, is paying for its public transportation, that’s their business.  You can’t tie every argument back to the illegal and unconstitutional dispensation of funds from the federal monster.  If that’s the point of view of the argument, then I can end this right now and say everybody that wants a one-size-fits-all universal policy because we have federal distribution of welfare and transportation moneys, then that’s what you get.  You get that and you surrender your powers.  I think you ought to amend the Constitution and say that, because that’s not the original intent.  Here’s how Madison explained it, just to cut to the point of why the power was reserved.

One argument offered in justification of this power exercised over aliens is, that the admission of them into the country being of favour, not of right, the favour is at all times revocable. [Mike: I’m answering your question. I’m letting James Madison answer your question.]

To this argument it might be answered, that allowing the truth of the inference, it would be no proof of what is required. A question would still occur, whether the Constitution had vested the discretionary power of admitting aliens in the federal government, or in the state governments.

But it cannot be a true inference, that because the admission of an alien is a favour, the favour may be revoked at pleasure. A grant of land to an individual may be of favour, not of right; but the moment the grant is made, the favour becomes a right, and must be forfeited before it can be taken away. To pardon a malefactor may be a favour, but the pardon is not, on that account, the less irrevocable. To admit an alien to naturalization is as much a favour, as to admit him to reside in the country; yet it cannot be pretended, that a person naturalized can be deprived of the benefit, any more than a native citizen can be disfranchised.

Again, it is said, that the aliens not being parties to the Constitution, the rights and privileges which it secures cannot be at all claimed by them.

If aliens had no rights under the Constitution, they might not only be banished, but even capitally punished, without a jury or the other incidents to a fair trial. But so far has a contrary principle been carried, in every part of the United States, that except on charges of treason, an alien has, besides all the common privileges, the special one of being tried by a jury, of which one-half may be also aliens.

The distinction between alien enemies and alien friends, is a clear and conclusive answer to this argument. Alien enemies are under the law of nations, and liable to be punished for offences against it. Alien friends, except in the single case of public ministers, are under the municipal law, and must be tried and punished according to that law only.

Mike:   What little Jimmy Madison is telling you, Mr. Gruss, is that the municipal law is not the law of Congress.  The municipal law is the law of the State of Maryland.  The municipal law is the law of the State of Virginia.  Again, I’m talking to you in 1798 terms.  Is that going to work today?  Probably not because nobody is going to assert the authority they have.  They’d rather blame Congress for not doing their job in protecting the borders, when in fact that is a job that was left to — in the sole instance, the only exception would be if one is determined to be an alien enemy.  To my knowledge, most of the migrant workers that we have working and picking asparagus and doing all the things they are often referred to doing must then be counted as alien friends.  I’m only giving you the textbook explanation. 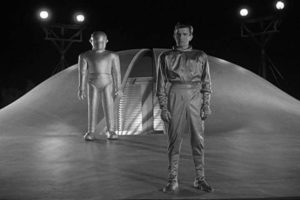