Mandeville, LA – Exclusive Transcript – If Congress wants to deal with this in a constitutionally consistent manner, what I think they ought to do is they ought to have the testicles to declare those that are here illegally as alien enemies.  That might require then a declaration of war against Central American countries, but then the designation of alien enemies would apply and you could then deal with the problem.  Short of that, all this is going to do is produce more tears.  Check out today’s transcript for the rest…

Mike:  I don’t understand.  What do you mean we’re going to need cheaper labor?

Caller Vern:  With regard to the immigration issue, here it is they’re kicking the immigration thing around.  Hey, it looks like things are going to get pretty tough.  We’re going to need cheaper labor.  That’s all.  Is that even something to entertain?

Mike:  I suppose it could be.  I don’t have any insider trading information on it, if that’s what you’re asking.

Caller Vern:  Not at all.  It’s just the raw feeling of why this is, that’s all.  It’s not based on anything.  There’s been mention that with the influx of all the illegals, well, they’re already here, that dubbing them whatever it is they’re going to dub them, that it’s going to have an effect on wages and what have you.

If we’re going to discuss it from that point of view — the big news today is that the Gang of Eight has triumphed.  They’re doing the victory lap around the inside of the Senate right now.  The latest and greatest immigration / amnesty / let’s build 800 miles of border fence and expand the federal police state by 10,000 officers effort in the United States Senate, it’s going to have 70 votes.  This is finally going to address this.  This is going to do this and that and the other.  In 1986, we were told the exact same thing.  There was an immigration bill that was debated for a long, long time.  When Ronald Reagan finally signed, it was purported to be the solution to the problem, that the problem had thus been solved and we would not have to address this ever again.  We had tightened up the screws on the border.  We had tightened up the immigration policies.  We’d dealt with the illegals that were here and amnesty was granted.  The rest, as they say, is history…

Well, when you look back the history, the rest was not history.  My contention is, and I’m not an expert in this by any means, but I do know that if you are a sovereign entity and a sovereign state, and if you cede control of who it is that becomes a part of your citizenry, you are going to dilute what your citizenry is going to think.  Not only that, you’re going to dilute or change or alter what your citizenry then produces, what it produces it for, how much of it it produces.  In other words, you’re going to have a long-term, maybe permanent effect on that.  I don’t know that there’s any reversing this trend.  The trend is that if you want a new roof put on your house, you don’t call Joe Brown’s roofer anymore; you go to a Home Depot and look for some guys that have dark tans hanging out and look like they need to be employed and you employ them.  [mocking] “Hey, can you guys do a roof?” — “Yeah, we can do a roof.” — “How much?” — “Of course, you’re going to get a cash money price and it’s going to be half of what Joe Brown was going to charge.”

My other contention on that is, how is that possible?  It’s pretty simple actually.  I don’t think it requires rocket science to understand this.  The illegal immigrant worker can work for the wage that the actual labor pays, not the inflated wage, not the wage that has the benefits built into it, not the wage that has the taxes built into it, not the wage that has the unemployment insurance and workers’ comp and all that other government-induced stuff that Americans are “entitled to” these days.  It has all these things built into it.  That’s how the immigrant worker can work for such a wage or such a low price.  They also don’t have any problem in congregating together in large quantities or living together in large quantities and sharing their facilities in order to lower that cost even more.  What they then actually are providing is what I would call — what the illegal immigrant worker provides and the price he is willing to exchange the labor for — this is all predicated on a couple things.

Number one is that the illegal worker actually lives here.  He’s actually established a residence of some sort.  He doesn’t have to purchase a home, he just has to be legally residing.  That’s the one legality that he does have to abide for this formulation to work.  If you’re doing that, what you’re seeing is what the labor actually costs.  That’s what it actually costs to provide the labor.  I know, because I can hear many people screaming at their radios right now, [mocking] “I’m an American.  I worked my whole life.  I’m entitled to these damn benefits.  I’m entitled to employment.  I’m entitled to a decent wage.”  Well, maybe what you call a decent wage never was a decent wage.  Maybe it was always an inflated wage.  Maybe had the debt not been accrued and not been encouraged as it has been, then that wage never would have risen to where it is today where you think it ought to be or that it must be.  This is a massive, massive problem.

The only way that I see, and I could be wrong about this, but the only way that I see out of this particular pickle is to not have a federal one-size-fits-all solution to this.  It is for the people of the localities, and if they must of the states, to determine and decide.  If you don’t want illegal immigrant labor in your state, then you are going to have to do something about it.  If you rely on the Feds to do this, you’re going to lose.  You’re going to have to actually do this yourself.  We’ve seen the struggles that Arizona has gone through, and Arizona has been unsuccessful because they are hamstrung by their membership in this Union.

Just imagine this: you create the federal government and the Union to act as an agent on behalf of the states because it is going to be a net positive for the states.  Then after you live under it for a time, the then agent grows to become the State and undermines and usurps all the authority and power of the states, so the State can’t actually do what the State needs to do in order to deal with this particular problem.  I believe most of the states have exerted some effort in this.  Some have exerted effort in the wrong direction or in the direction of: We want those alien friends here.

You conservatives out there that might listen to or read conservatives the rest of the day when I’m not around probably believe that there’s no such thing as alien friends, and that it is the illegal that is the bad guy, and the sanctuary cities are illegal, anti-federal and we’ve got to deal with them and we should drum them out of the Union, I’ve heard some famous television hosts say.  Really?  So you don’t believe in republicanism when it comes to the importation of alien friends into your midst.  I think that is the position that is inconsistent with the original understanding and the way it was lived, the way you lived under the compact known as the Constitution.

If a one-size-fits-all solution won’t work for 311 million when it comes to healthcare, why in dude’s holy name do some of you believe it will work when it comes to immigration?  Every state is unique.  Every locality is unique.  It would seem to me that the populations of those states and localities would be unique.  One locality may say: Yes, we have lots of asparagus, lots of lettuce and bell peppers.  We need pickers.  People don’t like picking but we can import alien friends here and they’ll do the picking.  You can actually legalize that, too.  You can make them legal members of your state.  There is nothing in the Constitution that says you can’t.  You can’t naturalize them as American citizens, but you can treat them as alien friends.  That’s what the whole fight over the alien part of the Alien and Sedition Act was.

If Congress wants to deal with this in a constitutionally consistent manner, what I think they ought to do is they ought to have the testicles to declare those that are here illegally as alien enemies.  That might require then a declaration of war against Central American countries, but then the designation of alien enemies would apply and you could then deal with the problem.  Short of that, all this is going to do is produce more tears.  It’s not going to solve the problem.  I do not believe that expanding the size of the gargantuan federal leviathan by adding border patrol agents of a national nature is going to solve what amounts to a local problem.

I know the argument, [mocking] “You don’t have a border.”  Well, my friends, the border of Arizona and Mexico, unless there’s a war going on, is the border of neighboring states.  Arizona has as much responsibility and right to patrol that, I would say the ultimate and constitutional responsibility, again unless there is a declared state of war.  Then that changes everything, but we’re not under a declaration of war.  That’s my constitutional take on that. 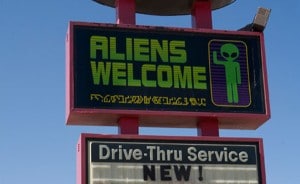