Mandeville, LA – Exclusive Transcript – Angelo Codevilla had written about how the elites, whether they’re Democrats or Republicans, pretty much all go to the same schools, live in or near the same cities, attend the same parties, go to the same functions.  Most of these functions and events we’re describing here and talking about are not attended by people like us, people that might go to a Tea Party rally or may go to a republican ReFounding Father Society meeting or something to that effect.  Check out today’s transcript for the rest…

Mike:  The IRS scandal, targeting the Tea Parties and targeting the 912 groups.  They’ve now had to admit: Yeah, we did it.  So your own government is targeting and singling out individuals for political retribution.  Here’s why this is not shocking: most of you people, myself included, already believe that at some level or in some agency, the government does this anyway.  This is why they create some of these agencies, to torment us or to keep tabs on us and make our lives miserable.  Remember, citizen, obey your federal overlords.  That’s why that is such a powerful and strong statement.

The reason you create governments is because anarchy doesn’t work and anarchy is actually scary.  Anarchy, if you go back in history and look at times when there was anarchy, anarchy does not produce desirable results.  People turned to governments, whether it’s monarchies, the vicious end of a monarchy which is a dictatorship of some sort, a secular one usually.  Most of your monarchs will declaim some kind of divine right.  There is still a Christian or spiritual element of most monarchies.  I don’t want to get into an argument with anyone over this, but divine rights of kings, the king is claiming divinity.  He is claiming that he is God’s messenger basically, and in many monarchies that is what the claim is, just historically speaking.

Mike Church Show Transcript: Community Is The Most Effective Tool For Fighting Terrorism

We have government so we don’t have anarchy.  If you don’t want anarchy, you have a government that’s supposed to protect you, supposed to protect your liberty, your life and your property.  That’s why we have laws.  Remember the question last week about law and order, there are two parts: law and order.  We ought to be mortified that the IRS was targeting 912 groups and Tea Party groups.  Of course, there’s another conversation to be had there, which is the silliness and the collusion, even if you don’t know that you’re colluding you’re colluding at some level when we enter into these things called non-profits because the government has told us this is your distinction.  If you want to exist as a group, you have to accept this tax-filing status.  If you do that, you have to accept these rules and regulations.  You can’t do certain things.  Wouldn’t it just be better off to A, organize loosely and not be officially organized, or B, organizing for profit?  That way at least you can escape that part of the government dragnet.

On this subject, Peter Lawler, writing at the Imaginative Conservative website over the weekend, has this piece, “Capitalism Has Won! And Conservatives Are Confused.”

R.R. Reno, quite an astute conservative public intellectual, claims that those with eyes to see know that the big news these days is the global victory of capitalism. I’m not following Reno in every respect here, but going with what I would say in support of his position.

The good news is that productivity has soared as a result. It’s easy to see that people are in many ways better off. Money and power can’t quite buy happiness. But who can deny that they’re really useful when it comes to being able to enjoy the genuine goods of human life: quality time with loved ones, civilized leisure, meaningful work, good health, and the serenity that comes with a large measure of security?

BUT capitalism, as Marx explains, privileges mental labor over physical labor. Brains, increasingly, are what sell. So our “cognitive elite” is getting richer all the time. Meanwhile, wages for the ordinary working stiff haven’t gone up for forty years. And who can deny that sectors of our middle class are sinking? The situation of that ordinary guy, as Marx also predicted, is increasingly precarious. In every area of life, safety nets are eroding. I’m not only or even mainly talking about our government entitlement programs. Everywhere defined benefits are being replaced by defined contributions.

Mike Church Show Transcript: Local Law Enforcement Could Do A Better Job Than The Feds

The global competitive marketplace is taking out unions, pensions, corporate and employee loyalty, and the very idea of a career. All the libertarians–our genuinely forward-looking thinkers–are saying that the idea of college is obsolete, the idea that you can spend four years in a privileged institution and readily transfer to another privileged institution (a corporation, a law firm or whatever). Liberal education is out, acquiring flexible skills and competencies is in. We’ll all soon be independent contractors, selling, as Marx said, our labor piecemeal for a price. So the whole idea of employer-based healthcare no longer makes any sense, although no one, neither Democrat nor Republican, has the guts to break it to the country.

Nobody much these days is really a progressive, believing that our future will be all about bigger and better government. [Mike: Listen to this. This is what I thought was really provocative about this.] The Democrats have become, in a way, the conservatives, defending the government benefits we now have and warning of imminent “voucherization.” And they have become so conservative that our president was viciously attacked from the Democratic left when he proposed a minor reduction in the rate of growth in Social Security. But it’s not like that left is seriously proposing an increase in Social Security. When the president proposes a tax increase, it’s pretty much to pay for what we now have. And we really sort of know that his strategy is to delay the inevitable.

And, as Marx predicted yet again, the bourgeois ideology of “choice” moves from the marketplace narrowly speaking to transform all of life. Who can deny that relational life–from religion to the family and every mediating institution in between–suffers as a result? Every human activity not tied to productivity is reduced to a whim, a hobby, a lifestyle option. As Reno said, the cost is huge to social solidarity and social stability.

Mike Church Show Transcript: Interview With Rod Dreher On Ruthie Leming, Community, And The Secret Of A Good Life

Some conservatives say that the family would come back if we just got rid of welfare. If people can’t depend on the government, they’d have to fall back to depending on those they really know and love. That simple conclusion–which might have some truth to it–doesn’t take into account the forces of dissolution associated with high-tech capitalist individualism. [Mike: There’s that word again, folks, individualism.] As Marx says, it’s capitalism that ripped the halo off those who devote their lives to seemingly unproductive voluntary caregiving.

We can see that our “cognitive elite” is tending to separate itself emotionally and, really, irresponsibly from the experiences of most Americans.

Mike:  Andrew, do you remember the Codevilla essay, the ruling elites?  We talked about this for almost six months on this show.  Angelo Codevilla had written about how the elites, whether they’re Democrats or Republicans, pretty much all go to the same schools, live in or near the same cities, attend the same parties, go to the same functions.  Most of these functions and events we’re describing here and talking about are not attended by people like us, people that might go to a Tea Party rally or may go to a republican ReFounding Father Society meeting or something to that effect.  They’re not interested in that.  As a matter of fact, they don’t want to be.  They don’t want to be within earshot of the hoi polloi.

I think the atomization or the breakup of these things, especially in communities, I think where people are by and large the most productive and most happy are where they are either developing or have developed and live in some form of a community, someplace where they know people’s names, know people’s tendencies.  They know when something is going wrong.  They know when something is going right.  This is what community is all about.  Then you have government as the next layer above that to just try to see to it that you can conserve that kind of lifestyle and living.  Then, of course, above that, you have God, religious, religious life and vocation, which preserves it all and guarantees that if you do what you’re supposed to do here in the earthly realm, then you can continue that anarchy-free life in the afterlife. 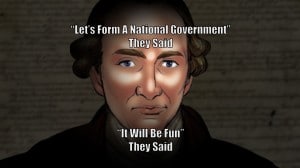