Mike:  The price of gasoline continues to go up.  Why?  As I told you, $85, $95 per barrel for crude oil is the new $45.  That’s the bottom.  That is largely due, not entirely, to inflation and how many dollars it takes now, thanks to Ben Bernyankme and the Federal Reserve, to actually purchase a barrel of crude oil.  Get used to whatever price for a gallon of gasoline is derived from $85 to $95 per barrel of oil.  I suppose we could have some deflation at some point in time and that may go down, although I don’t see that in the very near future.  That’s number one.

Number two, we have refineries that are being closed in the United States.  When a gasoline refinery goes down, it is not easy to replace.  These outfits run at 95 to 105 percent of capacity.  That’s how taxed they are.  In other words, we manufacture gasoline nonstop.  You can’t have an interruption in the supply, which is what has happened.  This is what has caused the price — AG, what did you have to pay for gas this morning?  You probably had to stop after a weekend.  How much did it set you back, $3.90 a gallon, $3.85?

Mike:  My bum was hurting me and I only paid $3.64.  I got a bargain compared to what you paid.  According to this story I have here from Yahoo Finance, there was a refinery closed in New Jersey.

Five dollar a gallon gas “is a real possibility” said John Kilduff, partner at Again Capital in New York. “This is partly being driven by the lost refinery capacity of about one million barrels per day…that’s a lot.”

Kilduff cited Hess’s closure of a key refinery hub in Port Reading, New Jersey in January as a major factor that has sent gas on a tear. “Prices haven’t looked back since,” he said.

“It’s one of about eight refineries that have announced closure. Now the East Coast is heavily reliant on [gas] imports when it used to be self-sufficient,” Kilduff stated.

Mike:  In other words, refineries keep closing down.  The oil companies don’t want to build new ones because they can’t get through the regulations or don’t want to have to go through the regulations and red tape.  The states will not stand up for private property rights and for their own sovereignty in their states.  You don’t have enough gasoline being made.  You have to bear in mind, gasoline prices going up in February, this is unheard of.  This is when the prices are supposed to go down.  There’s supposed to be less travel in the wintertime, not more.  What’s going to happen when that famous summer driving season kicks in?  What will happen when demand actually takes a spike?

As a matter of fact, you ought to think of it like this: we should probably, if you want gas prices to not go any higher, be hoping that there is no economic recovery until refineries can be built.  Why?  Because there won’t be capacity for fuel.  You won’t have the capacity for fuel.  Ladies and gentlemen, without gasoline, most of us cannot get to work.  We’ve made it so that we all have to travel these immense distances now on public government-planned roads to get to and from work and school.  We’ve made it so that this is now a prerequisite for modern life.  What happens when there is an interruption in any one of those factors?  What happens when any of that supply is curtailed, whether it’s from a natural disaster or by government fiat?  What happens?  Andrew just said he paid $4.05 a gallon.  Get used to it, buddy.

Just to make an analogy here, I live in southeast Louisiana outside of New Orleans.  This is a big Catholic-dominated city.  I myself am a Roman Catholic.  This is the season of Lent.  During Lent, one of the bastardizations of Catholic canon and the Catholic calendar has been that during Lent, on Fridays, you don’t actually have to fast anymore.  They changed that so all the sissies that didn’t want to actually do the fast as men for 2,000 years did, and as our Lord and Savior Jesus did in the New Testament, they changed it so you can have one meal on Fridays but it can’t have any red meat.  You can have something to keep you alive.  As if overweight, fat Americans are going to perish because they miss one day’s worth of meals.  They have concocted this thing where you eat fish.  Here in southeast Louisiana, the preferred fish dish is either fried catfish or boiled crawfish.  Seafood is huge here.

People are complaining mightily because the price of crawfish is exorbitant these days.  It used to be that during season, when demand was high at Lent, a very exorbitant price for crawfish would have been $1.25 a pound cooked.  That’s prepared food you take home and eat.  Today, that is somewhere around $2.75.  People are just, [mocking] “I’m not paying that.  That’s just too much.”  I know there are some other factors involved here that involve government meddling in how rice fields are managed in Acadiana where a bunch of the crawfish crop is produced.  It’s not totally because of inflation, but it is an inflationary issue we can show you.  The price of crawdads are not going to go down.  Mrs. Church keeps saying: By the time we get to Lent they’re going to go down.  They’ll go down some, but they’re never going to go back to where they were; they can’t.

It now takes more Ben Bernyankme dollars to buy the pound of crawfish.  The problem is that our wages have not increased.  We talk about this every now and then, how inflation has driven the price of everything up.  Coffee is more expensive.  Bread is more expensive.  Eggs and milk are more expensive.  Everything costs more and your wages are not going up.  People that are making more than they need to spend on the necessities of life don’t notice this or don’t care about it.  It doesn’t matter to them.  People that are living check to check, which is most of us, and were doing okay before inflation hit are getting clobbered by this.  Every month I go through this thinking: How in the world could I have spent the decent amount of money I made this month?  It’s because of inflation.  Everything costs more.  I don’t even have a long commute.  Mr. and Mrs. Church spend somewhere on the order of $450 to $550 a month in gasoline.  AG, how much do you think you spend a month on gasoline?  Are you a twice-a-week tanker or just once?

Mike:  You don’t live that far away.

AG:  Twenty miles in, so not too bad.

Mike:  And since you have to get up at 2:00 in the morning, you don’t go anywhere at night.

Mike:  Sorry to say that, buddy.  It’s to and from work.  As Marty the cop, our NYPD friend, once famously told me: Mike, I am a work-home-church guy.  I don’t know if AG has the church part, but he’s a work-home guy.  Of course, when March Madness and the Kentucky Derby hit, he changes.  People can’t afford the cost of living because it takes more dollars to buy things.  But we’re told there’s no problem with inflation.  Oh, yeah?  You wanna bet? 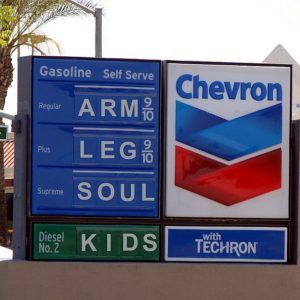 0Shares
BernankecatholicEconomyfederal reservefiatFiat moneygasGas pricesinflationmoneyOilrefineriesregulation
Previous PostCicero And The Romans Foreshadow The Fate Of The United StatesNext PostNational Government Is The Acme Company, One-Stop Shop For All Your Regulation Needs