Mandeville, LA – Exclusive Transcript – This is an excerpt from Daniels interview on the show today concering the 2012 Election and whether we’ll see a discussion on war, for the entire interview, please check out the transcript: “Both political parties are locked into a set of habits, a set of ideological thought patterns that they developed 20, 30, 40, even 50 years ago.  With the Democrats, you’ve seen this with their approach to the economy where it’s all Keynesianism.  They have not deviated from the pattern that was set down during the New Deal and Great Society.  The Republican Party, they’re locked into still the Cold War mentality, not only when it comes to having the massive military, and without having the Soviet Union to fight against, they’ve now gone off and started new crusades for democracy and other abstractions around the world.”

Mike:  Hello, Daniel, how are you?

Daniel McCarthy:  I’m great, Mike.  Thanks for having me on.

Mike:  It’s always a pleasure, sir.  You heard my little mini-monologue there on what’s going on with the Republican ticket, the Romney-Ryan campaign, and as I described, what it is they’re out there campaigning on.  Do you share that view or do you have a different view?  What would you tell them in your experience?  You do, after all, speak and write and talk to an awful lot of conservatives on a daily basis.  How would you advise them?

Daniel:  Mike, I agree with you.  I think it’s actually mystifying that the Republican ticket has taken the direction it has.  I think it’s a result of Mitt Romney not having any principles.  He’s groping around for someone who will give him any kind of direction.  Paul Ryan is someone who at least does have an interest.  He likes working with budget numbers and he likes talking about entitlement reform.  By sheer entropy, that’s the direction the Republican ticket has wound up taking.  Of course, you’re exactly right. Those are not the bread-and-butter issues that the voters are caring about.  I agree with you.  I would very much stress employment.  I would very much stress the war and having a more sensible foreign policy.  I would not be getting into these more technical matters and trying to pander to old people in Florida.

Mike:  It’s not just the old people in Florida, though.  The pacification, it seems, of this voting bloc of I guess what began in the 1980’s as the Evangelical Christians who migrated to the Republican Party specifically for the issue of abortion, and one would think for the abolition of the national ban on the states setting their own policies.  After 30 years, not much has become of that.  There have been some judgeships that have been put into more capable and maybe constitutional hands, but other than that it seems the general government is even more entangled than it ever was in the ghastly procedure, don’t you think?

Daniel:  Absolutely.  Even as far as the judges go, there remain to be question marks.  We may no longer have someone quite like Sandra Day O’Connor, although we still have Anthony Kennedy on the court, but who knows how Judge Roberts is going to rule if a chance to overturn Roe comes his way.  This idea that the Republicans have even delivered on the court side of things is questionable.  Republicans have long used this issue as a way to endlessly dangle a carrot in front of the mule to get Christian conservative voters to go to the voting booth and casting their ballots for the GOP without actually having to deliver much substance.

Mike:  Let’s switch gears on the same subject of campaign 2012 for just a moment.  The Republican Convention is next week, as you know.  Are you attending?

Daniel:  No, but we will have our reporter Jordan Bloom there.

Mike:  It begins next Monday.  We know what the theme of Monday and Tuesday is.  Andrew, you say Tuesday is “We did build that?”

Mike:  And Monday is, refresh my memory?

Mike:  Right, we’re not Obama, basically.  So in the first two days of the convention, you have a cliché and then you have what has become a bumper sticker.  What does that say about the seriousness of one of two major political parties and actually tackling very serious issues?

Daniel:  It absolutely confirms that there won’t even be an attempt at that at the convention.  The convention is just a pep rally.  It’s a pep rally just like you had in high school.  The idea that anything of substance will be debated is inconceivable.  It’s simply going to be confetti and pep rally speeches.

I’m simply saying that if I had a candidate that was running for the office of presidency today against Barack Obama and I were studying demographics and had a good, firm constitutional basis in my candidate, what I would tell him or her to do would be to stick with three things: economy, economy, economy jobs, jobs, jobs, peace, peace, peace, a humble return to some humility, a humble foreign policy where we agree that we’ve overreached our bounds overseas, we can’t afford it, need to bring our troops home, need to defend the Pacific Ocean where it ends in San Diego, the Atlantic Ocean where it ends in Miami, get back to common defense, and let’s at least rethink what it is that we’re doing while we save a couple hundred billion dollars a year in the process and leave the Middle Eastern oil sheiks to themselves.

You’re then going to get the argument, [mocking] “What are we going to do about oil?  We gotta have oil.”  That’s Church platform three, that we’re going to do energy, energy, energy, but we’re not going to do this all of the above garbage.  We’re going to be honest and say the impediment to energy is the Department of Energy and the Interior Department.  I propose upon election that I will not sign any bill that authorizes any funding for either of the two.  This is a matter that needs to be handled by the states.  It’s their resources.  We’re going to have to have oil if we’re going to stop importing the third that we import.  That will be my three-point plan.  I would not deviate from those three things.  We’re not even going to have a discussion in this election, are we, unless it comes from the Obama camp about Afghanistan and withdrawal, it seems?

Daniel:  No, not at all.  Both political parties are locked into a set of habits, a set of ideological thought patterns that they developed 20, 30, 40, even 50 years ago.  With the Democrats, you’ve seen this with their approach to the economy where it’s all Keynesianism.  They have not deviated from the pattern that was set down during the New Deal and Great Society.  The Republican Party, they’re locked into still the Cold War mentality, not only when it comes to having the massive military, and without having the Soviet Union to fight against, they’ve now gone off and started new crusades for democracy and other abstractions around the world.  All of that goes back to the world of the U.S. still fighting the Cold War, still fighting World War II even.  These parties are just utterly sclerotic.  There seems to be nothing to shake them up and force them to address reality simply because as long as the two of them have a death grip on the ballot, what are the American people going to do?  You get the lesser evil.  If you try anything more than that, you’re just supposedly wasting your ballot or wasting your time even showing up.

Mike:  Daniel McCarthy, editor of The American Conservative magazine on the Dude Maker Hotline.  Switching gears for a moment, you and I were on the Academy of Philosophy and Letters panels in June.  You and I had a similar take when we got to present to the scholars in attendance on Sunday.  Imagine that, me presenting to scholars.  That’s a funny one.  You had made a passing joke, but I didn’t take it as a joke, about conservatives being the people that are always running around with the Pig-Pen black cloud over their heads, [mocking] “Oh, my, the sky is falling.  All is bad.  No one reads the Constitution.  We’ve lost all this, we’ve lost all that.”  Do you see any indication that maybe people are starting to reacquire traditional paleoconservatism that may have been practiced in the ‘50s by Senator Taft, maybe even Eisenhower, and of course written about by the great Mel Bradford and Russell Kirk, that there is more to life than politics?

Daniel:  Absolutely.  Your own show is proof of that, right?  We didn’t have someone on the air talking about these things 20 years ago.  This is really a remarkable change.  If you look at the Ron Paul movement, I’m very encouraged by the youth.  You look at how well Ron Paul did during the Republican primaries with voters under the age of 30.  It’s clear that that’s the wave of the future.  If the GOP is going to have any kind of future at all, it’s going to have to start reevaluating these questions in a more traditional light.  Those things give me hope.  Also, I think the reality itself gives me hope.  It’s the fact that what we’re doing with fiat currency, what we’re doing with what Andrew Bacevich called “the defensive perimeter that encircles the world,” in other words with an empire, an imperial mindset in our foreign policy.  Those things are just not sustainable.  They wind up bankrupting themselves.  I think that sooner or later there’s going to have to be a change in policy.  Already, you have the listeners of the Mike Church Show and you have young people around the country who are waking up to these questions and going back to the principles and Constitution.

Mike:  Thank you very much.  I appreciate the prop. 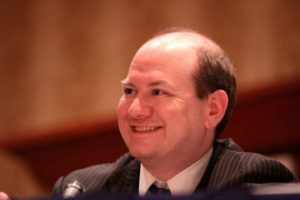