Interview with Andrew Bieszad on Terrorism

Mandeville, LA – Exclusive Transcript – “In your observation of what you have seen and what you have heard from ISIS, how Islamic are they or are they not?  Be as specific as you can, with the public beheadings and the ransacking of towns — it doesn’t seem to matter who it is that lives in the towns — along those lines.”  Check out today’s transcript for the rest….

Mike:  These things that have happened with this radical group ISIS — as you said, you’ve been watching Islam snuff films for a long time, before ISIS put them in high definition and hired Hollywood directors to make them.

Andrew Bieszad:  I have the original snuff films back when they were making them in Chechnya.

Mike:  In your observation of what you have seen and what you have heard from ISIS, how Islamic are they or are they not?  Be as specific as you can, with the public beheadings and the ransacking of towns — it doesn’t seem to matter who it is that lives in the towns — along those lines.

Bieszad:  Islam has always said — if Christianity is WWJD (What Would Jesus Do?), Islam is WWMD (What Would Muhammad Do?).  What did Muhammad do?  Muhammad was a highway robber, a murderer, an assassin, a cult leader, a pedophile, a necrophile, a slave trader.  He claimed he was demonically possessed.  He claimed the whole world would have to be under his religion.  He claimed he could do anything to anybody in order to assert his religion, because anything done for the cause of Allah is permissible.  What ISIS is doing, it’s actually rather monotonous for me.

They are doing what Muhammad did.  What you’re seeing lived out today is the [Arabic] first biography of Muhammad.  You are seeing that in today’s time.  They are trying to live out what Muhammad lived out 1400 years ago.  There’s nothing radical about this at all.  There’s nothing particularly deviant about it in an Islamic sense.  This is actually rather normal.  Deviant in Islam would be a Muslim saying: Hey, I am a woman, I am a lesbian, I am living with my lesbian partner, I think Christians are nice people, and I think that we should tie ourselves to a tree and sing Kumbaya to protect the Earth. That’s a radical Muslim.

Mike:  I have tried to explain this to the claims of hysterical American politicians.  Lindsay Graham, for example: We’ve never seen violence like this from Muslims.  There’s never been anything like this in the history of our country.  These people are more dangerous than anyone’s ever been.  You just disproved that.  Any biography that was written of the so-called prophet Muhammad pretty much backs that up.  Am I right?

Bieszad:  I’d tell your readers, if they want to read the real biography of Muhammad — this is the biography that’s used by all the Muslims.  It’s used by Christians in their criticism of Islam throughout the centuries, whether it’s in Latin or Spanish or Portuguese or Italian.  There’s a book called The Life of Muhammad by Ibn Ishaq.  You can find it on Amazon.  It’s published by Oxford University Press.  It sells for about thirty bucks.  That is the earliest biography of Muhammad that is known to exist.  It keeps a very detailed translation.  It tells Muhammad’s life story as Muslims understand it.

When you see Islam doing this violence, this is nothing new.  People might say I have an almost cavalier or apathetic view of Islamic violence.  It’s not because I don’t care or I don’t recognize the horror because I do.  I’ve been aware of this horror for a very long time.  Like I said, I have some of the original snuff videos that were produced years and years ago as part of my research.  What you’re seeing is nothing that is abnormal.  This is quite normal in an Islamic sense, and this is what Islam’s goal is to do. 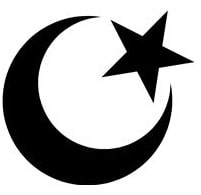 People think the violence is an end unto itself.  The violence if not an end unto itself.  People think of terrorism is the end to terrorize people.  No, it’s a means to the greater end, and the greater end is Islamization.  Like I said earlier, if you’re a Muslim, your goal is to establish Islam.  It’s what Muhammad teaches.  You do not have to be violent.  You can have people convert to Islam very peaceably.  There are two countries in the world where Islam never militarily had to do a violent conquest: Bangladesh and Indonesia.  Bangladesh was taken over by missionaries around the year 1200.  Indonesia was a gradual process of conversion over about 300 years.  These are the only two countries.

Mike:  So you’ve got two countries that have peaceably converted.  All the rest, or most of the rest, that were converted were as a result of the caravan raids and the occupation.  They’d run out of energy after marauding for a while.  They would do what?  What caused the gaps in between the caliphates?

Bieszad:  A couple things.  Sometimes people would stop them.  A lot of times it was because of infighting.  Muslims are notorious for fighting against each other.  If there’s anybody they hate more than non-Muslims, it’s other Muslims who have slightly different theological opinions.  They will kill each other in the same way or worse that you see going on in ISIS.  A lot of times that is normative in Islamic societies.  I mentioned Bangladesh and Indonesia.  Ask yourself this: How many jihadis have come throughout the centuries from Bangladesh and Indonesia?  Hundreds, thousands.  It’s incalculable.  The violence is tied to the dogma of Islam.  It’s inseparable from divine teaching as they believe.  In order to get rid of the violence in Islam, you would have to alter divinely-revealed teaching, which make it a religion other than Islam.  You would have to do that.  It’s inseparable.

In a short summary, for those people that aren’t aware of this, you have human dignity as an extrinsic part of you.  It’s not intrinsic to your creation.  We say man is made in God’s image and likeness, Genesis 1:27.  We believe that.  You can’t separate your humanity from the person.  Islam believes that [Arabic] “We have created man in the best of molds. Then do we abase him to be the lowest of the low.  Except for those who believe and do righteous deeds: for they shall have a reward in unfailing.”  Muhammad himself had said every child is born a Muslim, but his parents make him a Jew, a Christian, or a pagan.  Have you ever seen a baby animal?  It is not born mutilated.

Therefore, in Islamic thinking, a non-Muslim is a person who has willingly rejected his human dignity and therefore can be treated as an animal or less.  It’s the reason why the laws of Islam apply specifically to Muslim, whereas for non-Muslims, anything goes.  The only thing that stops their mistreatment is the choice of the Muslim.  It’s not like Muslims are commanded to mistreat non-Muslims, it’s that they’re permitted to and there’s no sin attached.  As Muhammad says: It’s neither harmful nor helpful.  It’s really your choice.  It’s sort of like whether you want to get the two-ply paper towels or the cheap one-ply paper towels at the grocery store, your choice.

Mike:  Andrew Bieszad is on the Dude Maker Hotline with us.  He has a PhD in Islamic studies.  What is the name of your book again?  We’ll see if we can sell you out again today.

Bieszad:  Lions of the Faith: Saints, Blesseds, and Heroes of the Catholic Faith in the Struggle with Islam.  You can look up AndrewBieszad.com or you can go to Amazon and get it.

Bieszad:  Becoming a Christian or a Jew.

Bieszad:  Pretty much.  Allah forgives most sins, but there is a bit in Islam whether he forgives those who are apostate.  There is some debate.  Some of the more conservative scholars will so: No, there’s no way.  It’s almost impossible.  You have to go through a very long — I guess you do a process of testing and seeing if your Islam is real.  Some Muslims will say it’s a mortal sin only as long as you persist in it.  If you come back to Islam, Allah forgives; Allah is most forgiving.  Both of them have decent points to make.  Again, it’s not an issue of whether it’s a mortal sin or not, it’s how that mortal sin is applied.  You’ll find within Islam, people will say Islam has different opinions and different sects.  No, there’s not.  There’s the Sunni and Shia, which are very different on theological levels.  But within Sunni Islam, 75 percent of all theology — the theology is not debated.  It’s just the implementation of it, which is less than 25 percent.  That’s all the discussion is about.

Mike:  So really then, when you hear Senators McCain or Graham or Menendez or Representative Rogers or any of them talk about how they have these dealings with these “moderate Muslims,” I guess if I’m understanding correctly, what they’re really having these discussions with are either A, Muslims that aren’t really Muslims, or B, Muslims that are just doing what Allah told them to do, which is whatever it takes to convert, whatever it takes to get the infidel to convert.  If it requires lying, do it.  If it requires killing, do it.  Am I right?  How close is that? 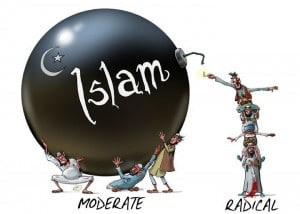 Bieszad:  I hate this term “moderate Muslim.”  Let me ask you, Mike.  You’re a Catholic.  You go to church.  You try to frequent the sacraments.  You believe in Our Lady.  You may have varying devotions.  Does that make you a radical Catholic?  Are you a radical Catholic as opposed to a moderate Catholic that support abortion and same-sex marriage and a whole host of other ideas because they’re moderate?  It’s the same concept within Islam.  It doesn’t exist.  Anybody who does is not following the teachings of their faith.  Islam is Islam; the Catholic faith is the Catholic faith.  Take it or leave it.  It is what it is.   You don’t have to believe in it, but then don’t call yourself one.  There is no such thing as a moderate Muslim.  A moderate Muslim is a modern, manufactured term used post-1980 by the West.  It does not exist in the Muslim world.  The Muslims will tell you this.  The president of Turkey, Recep Tayyip Erdoğan, he recently said this concept of moderate Islam is nonexistent.  Islam is Islam, and then there is deviancy.

0Shares
Andrew BieszadCatholic ChurchChristianitygrahamISISIslammccainmuhammadmuslimreligionsinterrorism
Previous PostThe Media-Industrial ComplexNext PostCIA Videotapes No Different Than ISIS Videotapes, And We Are At War Over Them