Mandeville, LA – Exclusive Transcript – The first program that began this began under President Bush.  Remember that the Republican-led Congress violated its oath of office in the most egregious fashion by saying the First Amendment did not exist and that Congress shall make no law respecting the establishment of religion or regulating free exercise thereof or freedom of the press.  Well, when they allowed the shenanigans that went on with the telecom companies in 2005 and 2006, that’s just one instance, that was an evisceration of the First Amendment.  Check out today’s transcript for the rest…

Mike:  How can I have yet another NSA bombshell story in my Pile of Prep today?  How is that possible?  I thought that everything we were going to learn about the spies who don’t love me had already been learned.  Remember the president said, [mocking Obama] “Look, there’s no more spying going on.  These programs are totally legal.  No one’s spying on American’s phone calls and emails.”  Oh, really?  Katie Pavlich writing at Townhall.com last night:

According to the Associated Press and newly released documents, the National Security Agency collected thousands of emails belonging to Americans with no ties to terrorism.

Mike:  This is not a surprise to me, probably not a surprise to many of you, although it will come as a shock to many.  [mocking] “How could they do this?”  Of course, the other side of that coin is [mocking] “Of course they’re doing this, this is Obama.”  The first program that began this began under President Bush.  Remember that the Republican-led Congress violated its oath of office in the most egregious fashion by saying the First Amendment did not exist and that Congress shall make no law respecting the establishment of religion or regulating free exercise thereof or freedom of the press.  Well, when they allowed the shenanigans that went on with the telecom companies in 2005 and 2006, that’s just one instance, that was an evisceration of the First Amendment.  But when Republicans did it, [mocking] “Mike, they had to do it.  There are terrorists out there and we have to get to them.”  It has nothing to do with terrorists.  Don’t you people see?  They used this excuse here.  This excuse will never go away.  It’s like the 14th Amendment.  It’s the gift that keeps on giving the whole year long, Clark.

Mike Church Show Transcript – 2,776 Violations By The NSA Isn’t The Problem, Everything The NSA Does Is The Problem

The nations’ top intelligence official is declassifying three secret U.S. court opinions showing how the National Security Agency scooped up as many as 56,000 emails annually over three years and other communications by Americans with no connection to terrorism, how it revealed the error to the court and changed how it gathered Internet communications.

Mike:  In other words, this is a misdirection.  Let’s show them, [mocking] “We’re going to reveal some things to you that we don’t even have to reveal to you.  I’m James Clapper and not only am I a citizen, but I’m also the president of the NSA.  I’ve also been surveilled, so I’m just like you.  I’m going to let you in on a couple of state secrets.  We spied on you, yes, we did.  And by the way, Ms. McGillicuddy, I don’t care and neither does anyone else around here that you wear purple panties on Thursdays.  The NSA, though, has a very important job here to do.  Our job is to terrorize.  Oh, did I say — I didn’t mean — I mean to stop people from terrorizing.”  So they throw this one out as if to say: See, see, we’re coming clean.  I’m not buying it.  If this is what has been officially leaked out and now the hoi polloi and the sheeple by and large don’t’ really care about this anyway, but now they go [mocking] “They came clean.  They released some information.  Why are right wingers, why are you libertarians, why are you still worried about this, man?  What’d you do wrong?”  I’ll explain that in just a moment.  This is going to have the desired effect.  It’s going to tamp down the opposition here by satisfying some people: See, they’re not so bad after all; they came clean.

The opinions show that when the NSA reported to the court in 2011 that it was inadvertently collecting as many as 56,000 Internet communications by Americans with no connection to terrorism, the court ordered the NSA to find ways to limit what it collects and how long it keeps it.

Mike:  In other words, the court didn’t say: You can’t do that.  Remember this FISA court is supposed to protect us.  It is supposed to defer to the Constitution like it is the rock of Gibraltar and is not to be violated in any way, shape, or form.  Remember, they take your security seriously, these people.  Your privacy is taken seriously.  The FISA court didn’t say stop.  The FISA court said slow down.  A famous phrase in American pop culture history from William F. Buckley, standing athwart history yelling, “Stop!”  Today we have millions of people standing athwart history saying: “Please just slow down a little bit.”  We’re never going to get to the cliff.  Do we have to get there tomorrow?  Can’ you just take a little while longer to subjugate us?  I’m kind of enjoying this season of Dexter.

Two weeks ago, President Obama reiterated promises that the NSA does not have a domestic spying program during an interview with Jay Leno.

Mike Church Show Transcript – Will The NSA And Big Government Stop At Nothing To Hide The True Scope Of Their Tyranny?

“We don’t have a domestic spying program,” Obama said, according to the media pool report. “What we do have is some mechanisms that can track a phone number or an email address that is connected to a terrorist attack. … That information is useful.” 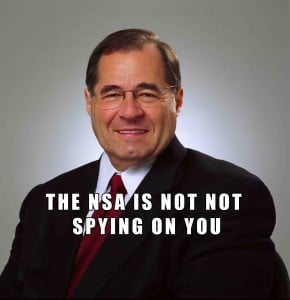