Mandeville, LA – Exclusive Transcript – Why do we keep saying we support the overthrow of these leaders or whatever you want to call them, dictators, fiefdoms, guys that are kings, whatever the case may be?  Why do I keep hearing that we oppose these duly-elected leaders?  Assad is actually a hereditary leader because his papa was the leader of Syria.  What business is it of a country 7,000 miles away to be picking favorites?  It’s almost as though this is American Idol Middle East.  Check out today’s transcript for the rest…

Mike:  If you’re not already motivated here on a Friday to be depressed, you will be after hearing this.  AG, here’s the headline from USA Today.  This is from back in April — I had to dig for this but I found it — “Syrian Rebels Pledge Loyalty to Al-Qaeda.”  Why would they do such a thing?  I thought they were our buddies.  I thought McCain went over there and visited the heart eater dude.

A Syrian rebel group’s April pledge of allegiance to al-Qaeda’s replacement for Osama bin Laden suggests that the terrorist group’s influence is not waning and that it may take a greater role in the Western-backed fight to topple Syrian President Bashar Assad.

The pledge of allegiance by Syrian Jabhat al Nusra Front chief Abou Mohamad al-Joulani to al-Qaeda leader Sheik Ayman al-Zawahri was coupled with an announcement by the al-Qaeda affiliate in Iraq, the Islamic State of Iraq, that it would work with al Nusra as well.

Mike:  If you’re trying to keep up with this, basically what you have here is a conflict — this all stems from a Western-led effort to get a gas pipeline to pass from Qatar through Syria, then up north through Syria it makes its way to Europe.  If that happens, then the Russians who currently control most of the European natural gas market, or sell most of the natural gas that Europeans use, they’ll have actual competition.  This is why the Russians are involved.  It’s not because they love Assad; it’s because they love selling natural gas.  So you throw us in the mix.  [mocking] “Hey, Paulie, Rocko, we need to get a cut in this.  Where’s our stake?  Where’s our patronage?”  So of course we can’t sit on the sidelines and just let the Russians do this sort of thing.  We have to get involved and claim it’s in our interest, although I haven’t heard anyone demonstrate why it’s in our interest.

The United States, which supports the overthrow of Assad . . .

Mike:  This is another one of these things where I keep wondering why.  Why do we keep saying we support the overthrow of these leaders or whatever you want to call them, dictators, fiefdoms, guys that are kings, whatever the case may be?  Why do I keep hearing that we oppose these duly-elected leaders?  Assad is actually a hereditary leader because his papa was the leader of Syria.  What business is it of a country 7,000 miles away to be picking favorites?  It’s almost as though this is American Idol Middle East.  [mocking] “Only one of you kings can survive and become the next Middle Eastern Idol that will not be bombed back into the stone ages by the American military.”  To make the long story very long and then shorten it up again…

Rhodes did not detail what he called the expanded military support, but it is expected initially to consist of light arms and ammunition. [Mike: Just give McCain time, we’ll get tanks over there.] He said the shipments would be “responsive to the needs” expressed by the rebel command.

Mike:  So you’re actually in cahoots with, in communication with rebels who have expressed an allegiance to Ayman al-Zawahiri and you’re going to give them weapons?  Is anybody following this?  Andrew, do you understand this?  Maybe I’m missing something.  Am I missing something here?  Can you shed some light on this?  Apparently not.

The shipments, to begin in a matter of weeks, will be undertaken by the CIA. The agency has been the primary U.S. government interlocutor with the opposition’s Supreme Military Council, led by Gen. Salim Idriss. Such covert action requires a signed presidential finding.

Mike:  Why does it require a signed presidential finding?  If you’re sending arms, weapons made for and by the  United States military and you’re sending them for use in a conflict or in a war, why doesn’t Congress have to authorize this?  Would a member of Congress put their stamp of approval on sending weapons to people that have pledged allegiance to Al-Qaeda?  Once again, because the moorings or the chains that are supposed to bind members of Congress and the executive down, that is the Constitution, are once again being totally ignored here.  The decision is being put into the hands of the executive, who basically can declare a de facto war against a foreign land.  We now are putting weapons into the hands of the people that are supposedly our sworn enemies.

AG:  We’re also giving weapons to a group of people that killed a 14-year-old boy this past week for simply saying, “Even if Mohammed comes back to life, I won’t.  That kid was shot in the face and neck, killed in front of a town square.  The rebels, when they read out the boy’s sentence, they didn’t read it in a Syrian accent but in classic Arabic.  “They accused the boy of blasphemy and told the crowd – which included the boy’s parents – that anyone who insulted the Prophet would suffer a similar fate.”  Really stable people we’re giving weapons to.

Mike Church Show Transcript: War-Hungry GOP Wants To Spend Money On War But Not To Feed The Children

Mike:  They sound like wonderful people.  They’re our buddies now.  These are our pals.  There’s also the story two weeks ago that when McCain went over there to make friends with his new Al-Qaeda buddies, his new Sharia Law enforcers — by the bye, Bashar al-Assad is not, not as I understand it anyway, not an enforcer of Sharia Law and that’s what the internal conflict is about.  The Muslim Brotherhood and the idiosyncratic Islamic groups over there wish to topple any leaders that are not those imposing Sharia Law.  In doing so, they find themselves in wars against people like Gaddafi, against people like Assad, and against the former leader of Egypt.  Then they find us as the patsy here, the people that will ride to the rescue.

Think about this.  Without American firepower, without American air cover, without American technological know-how, and the fact that we know now that the CIA is going to be transferring the weapons into Syria, I have a question.  Think about this.  Without the invitation of the legitimate government of the country of Syria, if our Central Intelligence Agency is announcing to the planet that our agents are going to be hauling boxes of weapons that are going to be used to fund and to assist an insurrection against the legitimate government of that state, would you call that an in any other place on Earth an act of war?  I would.

I gave this example before.  What if there was an uprising in Michigan?  What if there was an uprising and an attempt to overthrow the legitimate government of Michigan and it was happening by a bunch of fruitcakes in Detroit and they needed weapons and subsistence?  The news around the globe would be: Michigan governor stands firm and will not cave into demands of Detroit rebels.  What if through the Canadian border the Syrians snuck weapons in to aid the rebels in Detroit?  What would we call that?  But of course we have moral superiority.  We’re blessed and have been inspired by and ordered by God himself to do these things, so we can do it.

If you reverse the roles and put us in the position of the legitimate government — I question our legitimate government — that is being aided and abetted by a foreign power, you will then see the contradiction in terms.  [mocking] “Yeah, but Mike, we’re Americans.  We’re allowed to do this.”  Why?  Who died and made us ruler?  Who died us and made us He-Men and masters of the universe?  This is the problem.  Remember yesterday’s show?  I told you and I will continue to be the lone voice out here on my little island screaming about this, that most of our current political malaise is all about foreign policy.  Now you have a heaping helping of it this morning on a Friday. 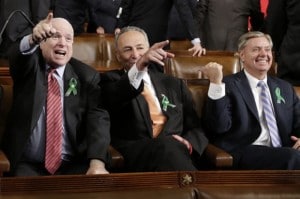