The difference between St. Benedict and the Benedict Option

Mandeville, LA – Exclusive Transcript – “He comes up with a very, very specific rule, as he called it.  All monasteries afterwards will follow Benedict.  They’ll all come up with a rule.  He doesn’t think that he can enforce the rule and keep the guys together if he doesn’t withdraw them from Roman society and put them in a monastery.  Monastery, one home.  That’s what he does.  That’s the Benedict Option.”  Check out today’s transcript for the rest….

When they found it, they used it to pass judgment and to basically run him out of his own company, which would not have been possible, Jordan, if other people in internet-based businesses had not gone along with it and cheer-led it on.  This wasn’t just homosexuals that were doing this.  These were your rank-and-file libs at major corporations saying: We won’t use Firefox if you don’t get rid of Eich.  My browser is now affected by the religious choices or social choices of the guy that designed JavaScript.  Binary code doesn’t have a moral aspect.  It’s zeros and ones in sequence.  That’s what Eich was working with, binary code.  But now even the binary code has become perverted.  How is that even possible?

Bloom:  It’s been politicized.  I think there’s a real misunderstanding, as far as conservatives go, about the real power differential here.  Like Indiana’s RFRA, if Tim Cook is against something, then you’re not really on the dominant side of the culture.

The Washington Post and all the mainstream media will say that the country is ruled by these bigoted conservative Christians.  It’s not the case.  You can see this in the backlash against Rod Dreher’s Benedict Option.  He’s beginning to make the case for Christians withdrawing from the culture because of these things.

Mike:  That’s what the Benedict Option is.

Bloom:  So there’s been some backlash.  David French at National Review wrote a piece about how cultural Christians have not even begun to fight.  They’re basically calling –

Bloom:  Absolutely, calling them to kind of get out there, advocate for Christian morality and all this stuff.  Basically what he’s saying is these people are going to get fired if they do.  A student at a university advocating for Christian sexual morality is asking to get expelled.  What he’s calling for is martyrdom, and there aren’t enough internships in the conservative movement to throw at these people.  There’s a real misunderstanding.

Mike:  Are there any?

Bloom:  Well, there are some.  They usually go to these people who have turned something into a big culture war stink on their campus.  That’s a good way to get your foot in the door.  There aren’t enough of these people.  It’s time we understood that we really are the weaker party here.

Mike:  The weaker party are the weaker side of an argument that I think is weak to begin with.  Let’s just start with the basics.  By the way, Jordan Bloom is here, our special guest in studio today, and frequent guest host here.  I hope you’ll return back to the chair.

Mike:  You do an admirable job.  We have to go back to the beginning to get some of the basics straight here in this discussion.  The first thing is, when Dreher talks about the Benedict Option, people have a conception of what it is.  Let me explain it to you.  I actually looked this up today because I wanted to make sure that I knew.  I thought I knew, and I was largely correct.  St. Benedict, whose sister was St. Scholastica, St. Benedict, at the time of his ordination, which was right at the end of the Roman persecution and martyrdom – Benedict is trying to create an 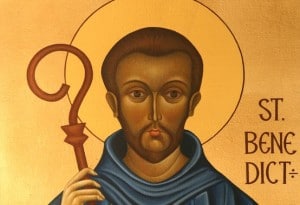 order of monks.  He’s trying to get them together to do certain things, hosting masses, for example, but also serving the poor, which Christ told us to do.  Benedict is living amongst a time when there are several heresies and there is the culture at the end of the Roman Empire, before it declares itself to be Christian, that they are living in a time that is not very far removed from Emperor Julian and Nero.  This is Sodom and Gomorrah basically amongst the people that Benedict is choosing his monks from.

He comes up with a very, very specific rule, as he called it.  All monasteries afterwards will follow Benedict.  They’ll all come up with a rule.  He doesn’t think that he can enforce the rule and keep the guys together if he doesn’t withdraw them from Roman society and put them in a monastery.  Monastery, one home.  That’s what he does.  That’s the Benedict Option.  Right across the piece of property at the other end, what’s at the other end, where St. Scholastica goes?  There’s a convent.  I don’t think it was called a convent.  They had both withdrawn, the men and the women, but they didn’t withdraw co-ed.  Could you imagine trying to do that today?  [mocking] “No, Benedict, sorry, pal.  You’ve got to let the gals in,” which, of course, would have defeated his rule.  That’s what the Benedict Option is.

The first thing that most people would conceive of, especially people my age, would be: Oh, so you want to erect Jonestowns everywhere, people running around taking the Kool-Aid.  Benedict became a saint because Benedict was devout and the people that followed him, even though – I don’t know if you know much about St. Benedict.  They tried to kill him.  His own monks tried to kill him.  They put snakes in his bed.  They poisoned his food.  He would find out sometimes because he would give a blessing over his food and a baby snake would come crawling out, or he wouldn’t eat it and the dog would eat it and the dog would die.  When you get a St. Benedict medal, it’s because he wards off evil.  Even his own people kind of turned against him.  I don’t know if Dreher has completely thought about the Benedict Option.

Bloom:  I think you’re right about that.  The big difference between St. Benedict and the Benedict Option is children.

Mike:  Right.  You’d have to have the children, obviously.

Bloom:  It’s also, I think, a big motivation for doing this, raising your children without having to worry about the diversity officers coming into class in the morning and telling them about gender fluidity.  I don’t want my children learning all that stuff.  There’s homeschooling.  Homeschooling is an option and it’s a very noble one, but it’s extremely costly in terms of what you pay for it, in terms of the opportunity costs.  It’s an extremely costly way to do it.  I think the Benedict Option, a better way to think about it is constructing a community where it’s easier to be virtuous as opposed to the culture we live in now, which makes it more difficult to be virtuous.

The other thing that I don’t think Rod has thought about – and I hope it will be in his book.  I can see why he hasn’t thought about this, or he hasn’t written about it anyway.  I’m sure he has thought about it.  If this were to ever be successful, if you were to ever have a very healthy, strong, growing community that’s organized in somehow a Christian way, probably around the church, is the U.S. government would see it as a threat.  They would crack down.  They would try to destroy it.  It seems to me you have three options in that case.

I’m going to write a piece at Front Porch Republic later.  I’m basically giving it all away right now.  You have three options when that happens.  You can either appeal to the progressive sympathy for the underdog.  You can beg and say: Don’t destroy us.  We’re a disenfranchised minority.  Then there’s a sort of Christian Taqiyya, the Muslim concept of strategic lying.  You can say: We’re not actually doing what we say we’re doing.  Or you can defend yourself and shoot back.  One of my favorite parlor games is asking people: What would be the thing that would actually cause armed rebellion in the United States.  I’ve gotten a lot of very interesting answers.

Mike:  Is there one that stands out?

“Mike has been talking about many different ways to deal with the American Union & it’s attack dog, the “Federal” government – There’s Article V & Nullification too.”

Bloom:  There’s one that stands out.  I was talking to him – he works for the government.  I don’t want to say any more than that.  He said: When there’s an organization that’s capable of fulfilling all the United States government’s functions but better.  So an alternative U.S. government.

Bloom:  Yeah, that would be the last thing.  It seems to me, and a lot of other philosophers have written about this, the only thing that’s truly capable of checking State power is the Church.  Anything that would fulfill this function of an alternative government would be the Church of God.