Caller Matt:  What I actually called about was the fact that I had an appointment at a VA hospital yesterday.  I’m of an age with you, Mike.  We are of the same generation.  I’m 48 years old.  I have some issues from when I served.  The VA takes care of me.  Every time I go, I see young men that were maimed and destroyed in these undeclared, illegal wars that we continue to fight.  We have sent an entire generation of young men, and women, which is a travesty, into combat to be destroyed both physically and mentally.  When they come home — the young man I saw yesterday couldn’t have been more than 25.  He wore a prosthetic left leg.  He had no left arm.  He was blind.  He was being led around.  I’m sorry I’m getting emotional, but this was very hard for me to see.  He was being led around by his girlfriend or wife.  I didn’t look closely enough at her hand to see if there was a ring.  Obviously, since the poor fellow didn’t have a left arm, he couldn’t wear a ring.

When I saw Obama and his staff parade those veterans on stage last night, I was incensed.  I could literally have slapped him and all his staff who were utilizing that tactic, stooping that low to take the injuries and the destruction of an entire generation of young people and paraded about as “look at these heroes.”  Yes, they’re heroes because they decided to go and serve their country, but they are being sent into places to do things that we should not be doing.  They’re coming home and even if they’re healthy, there are no jobs worth having.  There’s no hope for them.  They’re depressed.  The suicide rates are off the charts.  This must stop, Mike.  We have to do whatever it takes.

Mike:  I understand.  I can tell you’re emotional about it.  There are many of us that are, too.  The thing that you have to take into account here — there are so many thoughts running through my brain right now.  The first thought is that the other team wants to do what Obama has done and they want to double down on it.  This is in contravention, I believe, of a majority of the American people that don’t want this any longer.

I want you to consider something here.  We’ve spent a lot of time in the last four or five years talking about undeclared wars, and therefore, since they’re not constitutionally declared and commanders in chief don’t have the authority to bring us into war under our Constitution, which is the only thing that gives any power to our general government.  If there is no Constitution, then there is no general government and we must not obey it, you don’t have to obey it.  If there is no Constitution, there is no general government.  If the Constitution says this is how you get into a war, then that’s how you get into a war.  If you don’t like it, amend the damn thing.  You can’t do it by act of Congress.  You can only do it by amendment.  We spend a lot of time talking about the undeclared wars.  That’s good, but that doesn’t go far enough.

Now that many of you have dropped your neocon, decepticon, American exceptionalism, make liberty safe for the entire planet and anywhere it’s in danger, send our sons and daughters and treasure over there to allegedly preserve it or fight for it, now that we’ve broken through this level, the next bulkhead we must crush is, even if you get to the Congress declaring war, it better be a just war.  There’s this thing out there called “Christian Just War Theory.”  You better be existentially threatened and existentially in fear of or under duress that life will be lost and therefore must be defended or guarded against before you even convene Congress to declare wars.

Look for “Subjugation of the Philippines” by Senator George Frisbie Hoar, a man that filibustered for days on end to try and stop — he was the great grandson of Roger Sherman, a signer of the Declaration of Independence.  Sherman was on the committee of five that wrote the document.  Sherman was at the Federal Convention of 1787.  Sherman signed the Constitution.  Sherman signed the Articles of Confederation.  This gentleman was no lightweight.  His grandson, George Frisbie Hoar, said you’re not going to do this in the name of our founders, the Declaration and Constitution that my grandfather’s name appears upon.  His speech in opposition of “Subjugation of the Philippines” will give you all the foreign policy gravitas that you need to debate the neocon or decepticon down the street.

Matt, you’re right.  I dare say that there’s not a man or woman listening to this program today that doesn’t know someone that has a young hero, a young man of valor, young man or woman of valor or courage that has enlisted.  One thing that we can say about those troops that are paraded about as political props and abused and used as political props, in my humble opinion, one thing we can say about them when you see them with their missing arms and legs and prosthetics, one thing you can say about them is that at least they took their oath of office seriously, didn’t they, Matt?  They didn’t violate their oath of office, did they?  What do you guys in the military call it when it’s an illegal order or one that is not, I can’t think of —

Mike:  I hear what you’re saying, Matt.  I don’t know what to tell you other than evangelize to your friends.  Don’t yell, don’t scream.  Be kind, be patient about it.  Lead by example.  Talk in terms of the human toll that is exacted upon this generation and was exacted upon the last generation and the one before that, all in the name of being the biggest bully on the block.  You’re right, Matt, we’re not doing enough.  Not only are we not a great generation because we can’t stop them from spending and can’t stop them from abusing that privilege, we also seem incapable of stopping them from abusing the bodies, the actual bodies of our sons and daughters, grandsons and granddaughters, nephews and nieces, fathers and unfortunately mothers.  We’re putting mothers into harm’s way in the name of chanting “USA! USA!” at a political convention?  Are you kidding me?  And you want to tell me we don’t suffer from the greatest infection of hubris and arrogance and conceit?  Good grief.

Caller Matt:  We expect that generation of people whose mothers are being taken away from them and thrown into combat to be virtuous citizens.  How can we honestly expect that when we do not possess virtue enough ourselves to prevent that from happening?  We are failing the future.  We must do something now.  I agree, Mike, we must evangelize.  We must talk to all of our friends.  Use whatever social media that is available to you.  Use Twitter or Facebook or whatever to post and talk to people.  Bring up intelligent, fact-based discussion, not opinion.  Show them what the consequences of this ridiculous path of destruction we have undertaken.

Mike:  Matt, I have a friend.   He’s a big Libertarian and writes for LewRockwell.com.  He’s also the author of at least two books I know of about Christian just war theory.  His name is Laurence Vance.  We’re going to get Laurence Vance on this program one day and let Laurence give a little dissertation, one of which I’ve seen, about Christian just war theory and when is a war just.  It is so isolated and rare of an instance.  I don’t think that your average American person out there would agree with Vance.  [mocking] “We’re going to get crushed and we’re going to get killed.  People are going to take that as a weakness.  They’re going to come over here and Red Dawn invade us.”  Well, come try to Red Dawn invade the South.  You’ll be greeted with a 21,000-shotgun salute.  Matt, thank you for your emotion and passion and for your honesty in your phone call this morning.  Be well and God bless. 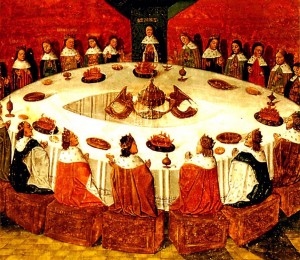 I wish I had heard this caller. I run round in a truck and because of my wife needing quiet to sleep I had to use a boom box for the head phone but they were always breaking.Now I have a stiletto at home soon as I can get there.Good grief have I missed the show.Thanks for the little bit of hope you bring into my life Mike though my wife hates you for getting me ginned up.I just cannot seem to get her yankee butt to see the error of the north,s way,s.But I,ll keep trying,maybe What Lincoln killed will be the touch.I,ll be buying that soon so hang on.