Mandeville, LA – Exclusive Transcript – You wrote on your Facebook page on Thursday that the minority should not have been able to thwart the will of the majority in these things and it was long past time for this to happen.  I understand where you’re coming from now that I’ve done a little reading on it, but there are other people that do not.  Check out today’s transcript for the rest…

Mike:  Number one, on Thursday last, as many of you know, the United States Senate voted to alter one of its rules of parliamentary procedure.  This is a little bit of history here.  I believe it started, back in the 1920s or so, as a two-thirds vote, 67 votes to end this thing called cloture.  Then it was pared down to 60 votes.  Now the thing called cloture, to end debate on a particular subject or bill, is a simple majority of 50 percent of the votes plus one, or the vice president casting the tie.  You wrote on your Facebook page on Thursday that the minority should not have been able to thwart the will of the majority in these things and it was long past time for this to happen.  I understand where you’re coming from now that I’ve done a little reading on it, but there are other people that do not.  The second part of my interregnum with you will be, that’s great and all fine and dandy and I understand the Jeffersonian point of view, but he was also operating or writing and thinking and living inside a system where the interest of the state legislatures was still protected and we aren’t.  Having said all that, this is your life, Professor Gutzman, go.

Kevin Gutzman:  Of course, there is nothing in the Constitution about the idea that a minority in the Senate should be able to veto what Senate majority wants to do.  That’s one thing.  I have heard self-styled constitutional experts, for example on the radio, one famous bloviator and name-caller whom we’ve discussed before, saying that President Obama is just stupid to say the founders wanted the Senate to work by majority instead of having this super-majority requirement for cutting off debate.  Well, the thing is, there’s nothing in any of the ratification materials, that is there’s nothing from the time the Constitution was written and being ratified to indicate that anybody thought that a minority in the Senate should be able to keep the Senate from going forward and working its will.

I’ve long had the feeling that this increasingly-common practice of Senate minorities vetoing proceeding on whatever the Senate was doing should be brought to an end.  As usual, the Republicans play pat-a-cake.  When they have control of the Senate, they don’t do anything about it.  They let the Democrat minority thwart their will.  Then when the Democrats take control of the Senate, by gosh, they put an end to this, at least in this limited context of presidential nominations other than Supreme Court nominations.  I anticipate that there will be an end to filibusters of presidential nominations to the Supreme Court.  If there is one, there will obviously be a rule change so that will come before the Senate for a majority vote, too.  Again, the Constitution contemplates that a majority in the Senate will be able to make decisions like that.  The idea that there should be this rule that says  in order for a presidential nomination to the Supreme Court can be confirmed, you have to have at least 60 votes has no relationship to the way the Senate was intended to work.  Therefore, I’m glad this happened.

Now, it’s too bad it happened at this moment.  The other thing about that is, of course, that I don’t anticipate it will be much longer that vice president Biden will have a vote that really matters in the Senate, that is it’s entirely likely that at the next election there’s going to be a new majority in the Senate.  Take heart from that.  What it would have meant in the old days would have been far more conservative judicial appointees from President Reagan.  I keep thinking of various judicial nominees whose names never came up for votes in the Senate while President Bush the younger was president, and so on.  What it means is, if you want to have your way in the Senate, you have to win the election.  You can’t expect to have your way if you don’t win the election.  In case you do win the election now, your majority will have more power than they had before, so good.

Mike:  In other words, this is an extension then of the electoral will?

To that extent, the Senate will, to the same extent as it was able to do so before this rule change, still perform the function of representing a different kind of majority.  That means that I don’t think anything about the legitimate function of the Senate is being thwarted by changing this rule.  I just don’t think there is anything useful anymore about allowing the minority leader to say he has 41 votes when the question came up that he didn’t want the Senate to reach conclusion on, and thereby he keeps the Senate from reaching a conclusion.  Notice what was going on here wasn’t really filibustering either.  There weren’t really days-long speeches or 100 senators on the floor talking about a question and a large minority voting not to proceed to a final vote.  Instead, this was just a parliamentary procedural matter now.  We don’t ever really see any substantial debate in the Senate anymore.  Crying for the loss of that is willfully ignorant, I think.

Again, I don’t think there was any positive purpose, philosophically-justifiable purpose, being served by having this cloture rule.  Originally, of course, the cloture rule was in the name of having unlimited debate.  Well, there’s not unlimited debate.  Turn on CSPAN and watch the Senate and you’ll see an empty room.  There’s not debate going on.  There’s one junior senator in the chair and then there’s usually one guy speaking and maybe a guy from the other party there to answer him.  That’s about all that’s going on in the Senate.

Mike:  Then there’s, of course, the ubiquitous display of charts.  No one can speak without a chart nowadays.  You have to have a chart.

Gutzman:  It’s, of course, for the purpose of having the folks back home seeing your senator on TV making a simple point for your dull mind to absorb.

Mike:  The chart serves the function of the United States Senate for dummies.

Gutzman:  Anytime you see a chart, you know the senator is not speaking to his colleagues; he’s speaking to the public.

Mike:  That is correct.  We can still lament the passage, though, of the 17th Amendment and that it eliminated point one of the two points.

Mike:  And that the individual state legislatures still have no direct check on the actions or the things that their United States senator is going to do.  I’ve even taken to asking the question — it’s difficult to get a response.  I’ve even taken to asking the question and asking people to keep their ears and eyes open to explore: When was the last time a member of the United States Senate even had relations, and I don’t mean those kind of relations, but intercourse with their governor, intercourse with their legislature, intercourse with their legislature meeting in a concurrent house, meaning both houses are present, in a committee of the whole?  If it’s happened, I haven’t seen it or can’t recall it.

There seems to me to be nothing in the 17th Amendment or in any electoral proceeding that I’m aware of that would prevent that and would prevent a United States senator from doing something to that effect.  It just doesn’t happen.  The principal element and component of federalism, which was guaranteed or they attempted to fashion a guarantee to have the senators chosen by a body that was not choosing them democratically, has certainly still been thwarted and remains thwarted.  There’s nothing that that vote in the Senate did to alter that.  While we still lament Amendment 17, you’re never going to get any of that principle back until that amendment is gone.  Is that a fair summary?

Gutzman:  I don’t think this has really anything to do with the 17th Amendment, which, you’re right, is one of the great stinks in American constitutional history.  I do think that the chief problem we have in politics today is the tendency of the central government to suck in all the power of the federal political system, at the expense of local self-government through legislative elections, which is, of course, the principle for which the revolution was fought.  Yes, that’s entirely lamentable. This has nothing to do with that. 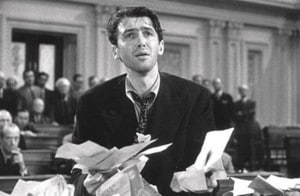