Mandeville, LA – Exclusive Transcript – Kevin Wade, running for Senate in the state of Delaware, called in to the show yesterday and talked to Mike for a bit about what’s going on in Delaware, here’s a quote from him and you can read more about Kevin in today’s transcript, “I’m a real-deal, all-American small business man.  I started a business on my kitchen table 30 years ago.  I’ve told my audience this, my first client when I finished the first job — I run a specialty engineering business — he said, “Send me an invoice.”  I said, “Yes, sir, I will.”  Mike, I went home and picked up a dictionary to look up the meaning of invoice.  That’s where I started.  I’ve kept the lights on for 30 years.  I’ve had to balance a budget every month for 30 years.  I think I’m the only U.S. Senate candidate from either party who actually spent a couple years working on offshore oil platforms.  I know what real energy is and I know what real jobs are.  My opponent doesn’t.  He is still lost in the land of offshore wind turbines.”

Mike:  We had a caller last hour, Fred from Delaware, who was informing us about the Senate races going on in Delaware and he mentioned candidate Kevin Wade.  Miraculously, Mr. Wade, who is a candidate for the United States Senate in Delaware has actually called the program and is on the line.  Kevin, welcome to the program, sir.  Good to hear from you.  How are you?

Kevin Wade:  Great, Mike.  Thanks for having me on the show.  I’m a great fan of Sirius XM Patriot.  You’re doing God’s work out there.

Mike:  Thank you very much.  Tell us a little bit.  We were trying to search for a poll to find out what’s going on in Delaware.  What is the lay of the electoral land?

Kevin:  Well, the lay of the land is this is a three-way donnybrook, to get back to your wrestling references from Randy Savage there in Florida.  He needs to come up here to New Castle County and help us turn this thing.  As of a week ago, and this is in a race against a 36-year liberal incumbent, 36 percent of the voters were still undecided as to their vote for the U.S. Senate position.  We have a real donnybrook on our hands.  It’s a three-way race.  Many people don’t know this but there is a self-funding wealthy liberal litigation attorney who’s entered the fray about six months ago.  He has simply been attacking Senator Carper day in and day out with all kinds of personal allegations.  I find that in our three-way forums, I’m the only adult in the room.  I’m the common sense Republican offering common sense solutions to the problems we have to get our hands on and get fixed if we’re going to pass this country down to our children and grandchildren in the way that we received it in our time.

Mike:  Kevin, I read yesterday that Congressman Ron Paul had endorsed you, as had Senator Rand Paul.  Have you spoken to either of those gentlemen?

Kevin:  Yes, I have.  I much appreciate their support.  They know I stand firm with the Constitution.  My opponent, Senator Tom Carper, 36-year liberal, was on the telephone conference about 12 months ago and he was asked about the Constitution.  He said he studied business in college and he’s only read the thing three or four times.  Mike, I think the Constitution is his contract with the people.  One of the problems we have is we don’t have enough folks in Washington who read the Constitution and believe it.

Mike:  I’m just reading your bio.  Forgive me, I was unfamiliar with your campaign.

Kevin:  We’ll fix that this morning.

Mike:  You’re not currently a member of the political establishment, are you?

Kevin:  No, I’m a real-deal, all-American small business man.  I started a business on my kitchen table 30 years ago.  I’ve told my audience this, my first client when I finished the first job — I run a specialty engineering business — he said, “Send me an invoice.”  I said, “Yes, sir, I will.”  Mike, I went home and picked up a dictionary to look up the meaning of invoice.  That’s where I started.  I’ve kept the lights on for 30 years.  I’ve had to balance a budget every month for 30 years.  I think I’m the only U.S. Senate candidate from either party who actually spent a couple years working on offshore oil platforms.  I know what real energy is and I know what real jobs are.  My opponent doesn’t.  He is still lost in the land of offshore wind turbines.

As recently as about a month ago, he was quoted in the local newspapers as saying that he thought one part of a solution to the Postal Service’s problem would be to build offshore wind turbines — now, Mike, stay with me on this — that would recharge electrically-powered delivery vans.  That’s what we’re up against here in Delaware, and that’s what we’re up against in Washington.  We have too many career politicians who are too long out of touch, who don’t understand the problems that everyday Americans talk about over their breakfast table.  My opponent, Senator Tom Carper, longtime liberal, has a habit of using this expression when he talks to his constituents.  They come to his office down in Washington speaking about what’s on their mind and how he should approach some of the great issues.  That right to petition in the 1st Amendment, his comment to people in Delaware is, “Your job is to row the boat, my job is to steer.”

Mike:  Wow, that’s a great analogy.  Kevin Wade, candidate for the U.S. Senate is on the line with us.  Tell the audience a little bit about how this will work in Delaware.  If it’s a three-way race, let’s say on Wednesday there’s 37, 37, 34, will there be a run-off?

Kevin:  No, it’s whoever gets the most votes.  This race will likely go to someone getting 39 percent.  In fact, this race comes down to one county of about 420,000, New Castle County.  There will be fewer votes cast to decide who is the next senator from Delaware than will be cast in a school board election in a major city.  This is a place of retail politics.  You stand in front of the supermarket and you shake hands.  Talking about supermarkets, I’ve shaken hands in front of many supermarkets here in the first state.  Everyone who goes in that market has a shopping list in their hand.  They know what they’re going to buy.  They know what’s most important and what’s least important.  My opponent, longtime liberal Senator Tom Carper, he and his crowd down in the U.S. Senate haven’t passed the national shopping list, a budget, in three years.  Our country is in a financial abyss.  The number one problem facing us is the default by the central government and the collapse of this economy.  They haven’t addressed it by even passing an imaginary budget in three years.  It’s time to bring common sense to Washington.

Mike:  You can find Kevin online at WadeForUSSenate.com.  For those that may actually be in the Delaware area, where will you be campaigning today in case they want to come out and retail politic meet you?

Kevin:  We’re up in New Castle County.  That’s the battlefield.  I will be speaking at a candidate forum at 11:30 with the Wilmington Rotary.  We’ll be covered on local radio.  Then I’m at a candidates’ debate with the Urban League in one of the African-American churches.  We’re finding great support in Wilmington as well.  I’ll be shaking some hands in between those two events.

Mike:  Kevin, I’m glad you called.  It’s a pleasure to know that republicanism is still alive and well, and there are still men of your caliber willing to throw your hat into the ring.  Godspeed and God bless, my friend.

Kevin:  Thank you, Mike, I appreciate it. 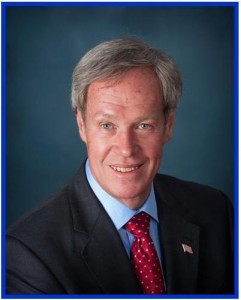 0Shares
Delawarekevin waderand paulRon Paulsenatesolar powertom carperturbinesuspswind farm
Previous PostPile of Prep: The Real Lincoln Will NOT be Seen on Movie Screens, The Real Story’s in What Lincoln KilledNext PostMcCarthy: What Happens to “Conservatives” if the Romney Campaign is Successful?

man, im so tired of these transcripts without the audio. what radio show doesnt have an actual podcast of the show? i would listen to Church everyday

To answer your query: Radio shows that do NOT own the rebroadcast rights to their shows. We cannot, by contract, rebroadcast the show outside of the meager 5 minutes we are allowed to use per day. You might like my “THis day in Founders History” or “Founders TV” bits, they have unique, original content to them as well or you can subscribe to Sirius/XM, purchase the On Demand service and get your podcast.

In all reality this state will put the Dems back in office as the program class In Wilmington DE outvote the rest of the state and the Republicans do not have a back bone, Remember Christine Odonald??
It is a real Shame Delaware.