In the ultimate act of naked ambition the GOP promises a “surprise role” for Donald Trump at the RNC Monday, what will the “surprise” be: A. Rolling out a layer cake where a Obama look-a-like jumps out with an Indonesian birth certificate strung around his neck B. The unveiling of the world’s largest piñata made in the shape of a Chinese iPhone assembler or C. Trump kicks the convention off on the set of “The Apprentice” lecturing a black man playing Obama whose back is to the camera, the lecture ends, the camera closes in tight Trump says “You’re fired” cut to this playing on Jumboscreen at RNC, fireworks ensue, wheeeeee!

Now that their dictator is in the WH, libs seems perfectly comfortable with civil liberties abuses they howled “holocaust” and “gulag” over when Bush 43 did them

The national democracy’s newest war that we must all enlist in: The war against women and stupid men who have never been pregnant (see Todd Akin)

TIC: Are Americans committed to a Supreme Symbol and a Supreme purpose? If we are then what are those things and where can we gather to agree on them in community? – Lincoln could not have declared these things either, yet he did

Lincoln the Vampire Slayer, in THIS culture-will become more fact than fiction as the mythology of the evil South and noble North spreads yet again like the creeping intellectual virus it has become

That “beep…beep…beep” you hear is the sound of the GOP bus backing up and running over the carcass of  Rep Todd Akins, MO for his “rape” controversy, yet no one has demanded the ACTUAL Vice President resign for his Amos and Andy impersonation in front of a crowd of blacks – Hannity plays Godfather, asks Akin to quit

What are the facts on how many rapes result in abortions? The number is almost immeasurable

ABC News leads with fake news stories again, this time on the suicide of Director Tony Scott and the king of what I call “daytime hyperventilationists”, Shepard Smith of FoxNews, rolled with it for an entire hour. Here is the INCORRECT brain cancer story still posted as of 8:30 p.m. last night

NOT A Shockuh: They love spending OPM. Blue State philanthropy fakes are outspent by hick-hayseed Southerners in latest charity survey

Screencap of the shoddy reporting-anything to get the “story” first 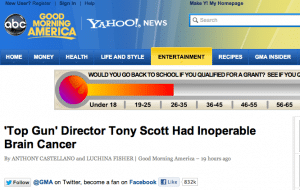