Mandeville, La – Exclusive Transcript – Kucinich is the only one that said it and got it right.  Dennis Kucinich, the hated liberal, is the only one with truth in advertising.  The other party is conservative though.  Kucinich was on the ball.  I know he’s a flake.  So what?  That’s just sad, folks.  That was the political spectacle at the hearing in Congress on the tragedy in Libya, as it was intended to be.  I think it may have been pretty effective. Check out the rest in today’s transcript…

Mike:  Then there’s the specter of Mrs. Clinton.  What did Hillary know and when did she know it?  There’s a lot of high theater in this yesterday.  This is an absolute disgrace.  Regardless of what you think about how we got into Libya, we shouldn’t be there to start with and there wouldn’t be a bunch of terrorists running around had we not had a president that violated his oath of office, had we not had a secretary of state and a secretary of defense that carried out his violation of office and assisted in making war on Libya and in the assassination of Muammar Gaddafi against United States and international law.  That never came up.  We don’t want to talk about matters of principle and matters of conscience here.  We have a president we need to disgrace, an administration we need to embarrass.  We’re Republicans; they’re Democrats; let’s get to it.

That, to me, is what is disappointing.  Principally, you would hope that we’re going to kick Obama out, put a Republican president in there, and we’re not going to let him violate his oath the way the current occupant of the White House has done.  Am I asking too much when I say that’s what I wanted to hear, that’s what you ought to want to hear?  You should want the general government to have to atone and account for and make its case to the public, through the public’s house, in order to do the things that they now do, and certainly that they did in March, April and May of this year in regards to Libya and its former dictator or leader Muammar Gaddafi.  Such was not the case, unless I missed it.  I didn’t hear any of it.

Think about this, though, folks.  How does the president maintain any stature whatsoever after what happened?  AG, did you hear any of this?  Did you see Krauthammer last night?  Did you see Dr. Krauthammer on Special Report?

Mike:  He basically said that Mrs. Clinton gave a eulogy, stood next to the casket she was eulogizing while she was responsible for him being in the casket.  I think I have the video here.  Krauthammer, Hillary told video lie as body of the ambassador was lying — listen to this.  Do you think we don’t live in some of the most bitter, destructive, partisan times in the history of the world?  Listen to this.

Charles Krauthammer:  There are two scandals going on here.  The first is a cover-up.  We now know, and they knew earlier, there was no mob, no demonstration, no incentive about the video.  That was all a completely false story.  This is simply an attack of our men who infiltrated and killed our people.  Everything Susan Rice said was a confection.  It was an invention.  As you showed, it was repeated again and again.  You had Hillary Clinton speaking about the video as the body of the ambassador was lying next to her.

Mike:  You notice there was not a single thing wrong with taking Gaddafi out, nothing wrong with taking Gaddafi out.  What we should have done is taken Gaddafi out and then acknowledged that there were a bunch of al-Qaeda nutbags running Libya.  We should have gone in there with armor and tanks and troops and put barbed-wire fences up at an embassy.  I cannot be the only person on Earth, the only man on this planet that calls himself an American citizen, that wonders why we need to have embassies — which are supposed to be beacons of friendship and amity and commerce and trade — with giant military-protected barbed-wire fences around them, with machine guns on the roof.  [mocking] “Mike, that’s how all embassies are.”  Really?  Maybe we shouldn’t be in the countries where we have these embassies.  [mocking] “American citizens want to travel there.”  Well, they’re stupid then.  Too bad.  So the entire country has to extend its military presence into some third-world backwater somewhere in Africa or on the Arabian Peninsula because he wants to go sell his widgets to a Saudi prince?  Are you kidding me?  That’s why we have a constitution, I guess.  Good grief.

My protestation notwithstanding, again, this never should have occurred.  This ought to be the conservative line: this never should have occurred.  Obama was wrong to have done what he did.  He should be impeached over it.  You get two birds with one stone.  Don’t you see?  If you pursue this from the truthful angle, from the constitutional angle, not only do you embarrass and take out President Obama by his impeachment or threat of impeachment, by proxy you also get Mrs. Clinton.  You damage the Democrat Party and the dumbocrat brand going forward by being actual conservatives.  No, we’re world settlers.  No, we’re empire builders.  No, we have to remake and shape events in the world so that they benefit us and our allies even if it costs life, limb and ambassadors.  No, we can’t do things that way.  Come on, Mr. Church.  We’re Americans for crying out loud.

I think that is a fair case to make, that if you acted really conservative in the Russell Kirk meaning of the word, heck, the Ronald Reagan meaning of the word as it comes to foreign affairs and foreign policy, you could not only maybe dispatch President Obama, but you would undermine and kneecap Mrs. Clinton so she could not be a factor in your future either.  All this stuff we’re talking about, it is just simply a sign of our societal decay that it’s even still a contest.  Granted, the Romney/Ryan plan, as we continue to point out here, does not solve the problems.  I don’t care how much propaganda you throw at me, it doesn’t.  The foreign policy is absolutely aChristian and is, in my humble estimation, more destructive than Obama’s is.

Having said that, at least they appear at some levels to be competent.  You can’t say that of the Obama campaign with Stephanie Cutter and the rest of them running around lying through their teeth and instance after instance where you can demonstrate that they weren’t tending to the business of actual government when it came to the embassy in Libya and this all came about as the result of the president violating his oath of office.  As a matter of fact, I think we actually have one member of Congress that got it right yesterday.  Dennis Kucinich in the Libya hearings actually got it right.

AG:  We have him commentating right here.

Mike:  I said earlier, just to recap, the embarrassing hearings for the Obama administration yesterday in the Benghazi terrorist attack or whatever you want to call it, and the killing, the murder of four Americans including Ambassador Stevens, it had all the elements in it of high theater and congressional oversight.  This was the big game and the bright lights were on.  It had all the elements you want except the Constitution, all the elements you want except proper disbursement of legislative powers.  Those men should never have been there under those circumstances had the conservative cause and had conservatives held the president’s feet to the fire and corrected him when he erred by assisting in the assassination of Muammar Gaddafi, and without their approval sending troops to participate in the conflict in Libya.  Here’s Dennis Kucinich, the only guy who got it right, Congressman Kucinich.

Rep. Dennis Kucinich:  We could do a he said / she said about whether the State Department should have beefed up security at the embassy in Benghazi.  We owe it to the diplomatic corps who serves our nation to start at the beginning, and that’s what I shall do.  The security threats in Libya, including the unchecked extremist groups who are armed to the teeth, exist because our nation spurred on a civil war, destroying the security and stability of Libya.

Mike:  He’s the only one that said it and got it right.  Dennis Kucinich, the hated liberal, is the only one with truth in advertising.  The other party is conservative though.  Kucinich was on the ball.  I know he’s a flake.  So what?  That’s just sad, folks.  That was the political spectacle yesterday, as it was intended to be.  I think it may have been pretty effective.  I mentioned just now Dennis Kucinich.  Let’s pick up where we left off with Congressman Kucinich’s upbraid of the Libyan situation in Benghazi and how it never should have happened this way.  Remember, Kucinich is a Democrat; Obama is a Democrat.

Rep. Kucinich: It’s not surprising, given the inflated threat and the grandiose expectations inherent in our nation building in Libya, that the State Department was not able to adequately protect our diplomats from this predictable threat.  It’s not surprising and it’s also not acceptable.  It’s easy to blame someone else, like a civil servant at the State Department.  We all know the game.  It’s harder to acknowledge that decades of American foreign policy have directly contributed to regional instability and the rise of armed militias around the world.  It’s even harder to acknowledge Congress’s role in the failure to stop the war in Libya, the war in Iraq, the war in Afghanistan, the war in Pakistan, the war in Yemen, the war in Somalia, and who knows where else.  It’s harder to recognize Congress’s role in the failure to stop the drone attacks that are still killing innocent civilians and strengthening radical elements abroad.  We want to stop the attacks on our embassies?  Let’s stop trying to overthrow governments.  This should not be a partisan issue.  Let’s avoid the hype.  Let’s look at the real situation here.  Interventions do not make us safer.  They do not protect our nation.  They are themselves a threat to America.  Now, Mr. Kennedy, I would like to ask you, is al-Qaeda more or less established in Libya . . .

Mike:  Kucinich is out of office.  He lost his primary, didn’t he, AG?

AG:  I believe he did, yeah.  The single line where he says “Let’s not make this partisan,” I wish that could be the case.

Mike:  No, it has to be partisan.  There are evil people that are Democrats.  If you’re a Democrat, there are evil people that are Republicans.  We must not sit down at a table together and figure out how to fill that $16 trillion hole in and prevent the $220 trillion mountain that sits on top of it from consuming all of us.  No way, buddy.  [mocking] “You’re a moderate, Mike.  I knew you were.  I knew it, I knew it, I knew it!  I knew you were a blame America firster.”  Congressman Kucinich just delivered the only nonpartisan commentary on the entire Libyan debacle that was heard in that room yesterday that I am aware of, which is why I was clapping at the end of it. 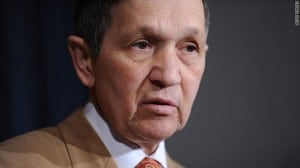