Mandeville, LA – Exclusive Transcript – If you’re going to have a written law and you choose not to obey it, why do you have a written law, Mr. Seidman?  That’s what I would ask you in return.  By the by, what part of the Constitution and the ratification of same is illegal?  If you’re going to say that it’s illegal, what I assume that he means is that it was illegal because there was a perpetual union formed by the Articles of Confederation.  None of the states at the time bothered to secede from the Articles of Confederation before adopting and acceding to the Constitution. Check out the rest in today’s transcript…

As the nation teeters on the edge of fiscal chaos, observers are reaching the conclusion that the American system of government is broken. But almost no one blames the culprit: our insistence on obedience to the Constitution, with all its archaic, idiosyncratic and downright evil provisions.

Our obsession with the Constitution has saddled us with a dysfunctional political system [Mike: I don’t disagree with the dysfunctional political system, but I don’t think the Constitution is the culprit], kept us from debating the merits of divisive issues [Mike: Again, that’s not the Constitution that’s doing that. If you want to debate the merit of a divisive issue, it ought to be a debate to tell where people are going to live under a governmental issue of that decision. Again, see [r]epublicanism.] and inflamed our public discourse. Instead of arguing about what is to be done, we argue about what James Madison might have wanted done 225 years ago.

Mike:  Mr. Seidman, there are 152, at last count, in North America that argue about what James Madison would have wanted done 225 years ago.  The rest of the people don’t argue that case anymore, sir.  Maybe you need to read some more modern news clips.

As someone who has taught constitutional law for almost 40 years, I am ashamed it took me so long to see how bizarre all this is. Imagine that after careful study a government official — say, the president or one of the party leaders in Congress — reaches a considered judgment that a particular course of action is best for the country. Suddenly, someone bursts into the room with new information: a group of white propertied men who have been dead for two centuries, knew nothing of our present situation, acted illegally under existing law and thought it was fine to own slaves might have disagreed with this course of action. Is it even remotely rational that the official should change his or her mind because of this divination?

Mike:  It would be rational if they were obedient to the fundamental, foundational written law.  If you’re going to have a written law and you choose not to obey it, why do you have a written law, Mr. Seidman?  That’s what I would ask you in return.  By the by, what part of the Constitution and the ratification of same is illegal?  If you’re going to say that it’s illegal, what I assume that he means is that it was illegal because there was a perpetual union formed by the Articles of Confederation.  None of the states at the time bothered to secede from the Articles of Confederation before adopting and acceding to the Constitution.  That’s a great argument for many of you people to ponder that cannot grasp what it is that federalism is actually supposed to do, and why it is that secession is an incontestable, irrevocable right, and yes, it is reserved and preserved under the Constitution.  We know this because 13 states acceded to the Constitution after seceding from the Articles of Confederation.  That’s the only way they could have possibly entered into the new compact.  We don’t talk about that because that’s fact.  He continues on and there’s much more on this.

A question to you, the audience: Do you really think that in the hallowed halls of Congress, men are debating what they think James Madison wanted 225 years ago?  If they are, outside of maybe Rand Paul, Justin Amash, Louie Gohmert and a select few others, please show me where that finds its actual way into legislative acts.  Where do you see that at?  Back to the telephones, Jerry is in Michigan.  How you doing?

Caller Jerry:  I’m doing okay, Mike, how about you?

Caller Jerry:  Like I told your screener, the observation that most of these problems that we’re talking about seem to go back to being gentlemen and doing the right thing and being the leader of your family and personal responsibility.  Nothing is our fault anymore, it’s somebody else’s fault so somebody else has to take care of it.  We’re barred almost from making our own improvements and our own decisions.  Someone else has to make them for us.

Mike:  Well, you can’t make your own local decisions anymore.  This guy is arguing about how we can’t have debates over divisive issues.  He’s right.  You can only have a debate over a divisive issue if it happens in Congress or in the Supreme Court.  You can’t have that debate at your town hall and decide whether or not you think abortion ought to be legal in your county, or whether homosexuals being civilly joined in your county or state ought to happen because you’re always going to have some federal yahoo that’s going to come in and say, “We’ve got one size fits all in this country,” or I would say in this nation.  It now is literally a democracy.  We now have democracy, which means 50 percent of the people plus one vote.  This always leads to tears.  The tears are not the kind that you cry at the end of a Julia Roberts movie.  The tears I’m talking about are the kind you cry because there’s nothing left to be happy for, except for the fact that you’re here and alive.  You can still hopefully find a church somewhere to go pray to our Lord and Savior Jesus Christ and to thank God that you are alive.  There’s not much good to cry about there. 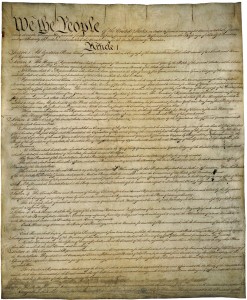 0Shares
articles of confederationConstitutionfederalismnew york timesseidman
Previous PostIf Congress Can Make Its Own Rules… Why Can’t We?Next PostEven The English Knew The Constitution Made Secession Legal