UPDATE I – A Ron Paul confidante writes to me after this show and content aired: “Mike, That’s who [name withheld by Editor] Jesse was primarily referring to, I’m quite sure, not you, Lew, Tom etc. You are a leader in this movement. A very important leader as a national radio host with a HUGE platform and a talent for spreading the message in ways some of these politicians and academics can’t.  Just wanted to make sure know one thinks you’re somehow “fringe.” That’s completely absurd. Big confusion thanks to a big jerk.”

Right before I was introduced at PaulFest, Peter Schiff shows up.  He was scheduled to go on two speakers after me.  I gave a shout out to Peter, “Hey, Peter.”  He kind of looked at me like I was a space alien.  I walked over to him, very excited to meet him, “Mike Church, Sirius XM Radio.”  He kind of went, “Yeah, yeah,” like I don’t know what you’re talking about, dude, let go of my hand.  That’s really what it was like.  Then I find out after I give my speech, I go ahead and leave.  I find out that after my departure, Peter bails on his speaking engagement at PaulFest.  There is a video on YouTube that at least provides some details on why that happened.  Apparently Peter received a phone call or a text message from Ron Paul’s grandson-in-law Jesse Benton, who is a Paul campaign manager, telling him that he shouldn’t be associated with these people, that they were a fringe element and some people involved in it were bad news. Check out today’s transcript for the audio and video of the rest…

Mike:  Let’s get back to [r]epublicanism for a moment.  As I said earlier, I am here at the RNC but this is the [r]NC here.  Just because I’m here at the convention, folks, if any of you are thinking, [mocking] “That’s it, he’s sold out.  He’s one of them now,” nothing can be further from the truth.  I turn your attention to my speech last night at PaulFest, which was in the end of the three-day PaulFest.  We have a little bit of Ron Paul news here, a quick update.  I show up last night and I was introduced by Karen Kwatowski, who ran for Congress in Virginia.  She’s a sweet, sweet, very smart lady.  At least she’s going to run for the House of Representin’ again in 2014, and I think she’s going to do very well.  So Karen and I had a wonderful chat backstage.  We talked politics, kids, living in Northern Virginia, Ron Paul, all sorts of things.

So Karen went first and she introduced me.  Right before I was introduced, Peter Schiff shows up.  He was scheduled to go on two speakers after me.  I gave a shout out to Peter, “Hey, Peter.”  He kind of looked at me like I was a space alien.  I walked over to him, very excited to meet him, “Mike Church, Sirius XM Radio.”  He kind of went, “Yeah, yeah,” like I don’t know what you’re talking about, dude, let go of my hand.  That’s really what it was like.  Then I find out after I give my speech, I go ahead and leave.  I find out that after my departure, Peter bails on his speaking engagement at PaulFest.  There is a video on YouTube that at least provides some details on why that happened.  Apparently Peter received a phone call or a text message from Ron Paul’s grandson-in-law Jesse Benton, who is a Paul campaign manager, telling him that he shouldn’t be associated with these people, that they were a fringe element and some people involved in it were bad news.

There was a crowd there that had gathered and come to see people like myself, Adam Kokesh, Peter Schiff, some of the bands there.  This is the thing about that: Schiff had to have known, and Benton had to know, that Tom Woods fills in for Schiff on his radio show.  My buddy Tom Woods, one of the smartest men walking, living and breathing, who is not a fringe element.  Not only is a smart, libertarian-leaning guy with unbelievable historical knowledge, for those of you who are in to this sort of thing, he is as devout and informed of a classical, Roman, Extraordinary Mass Catholic that you’ll find.  He even wrote a book about it called Sacred Then and Sacred Now, about the church getting away from the Extraordinary High Mass and going to the new mass.

To even intimate that Tom Woods is part of some fringe element and that Peter should leave, and for him to take that advice — I’m as miffed by him taking the advice as I am of Benton offering it.  So this is the way the Ron Paul Revolution goes out in Florida.  Hurricane Ron comes in.  They have a big hoop-de-do last night at the Sun Center.  14,000 people show up including Lew Rockwell and Rand.  This is what people are going to remember.  Folks, I also know I’m a fringe element now.  I’m supposed to speak at LPAC, which is Rand and Ron’s political action conference in Virginia.  I haven’t been informed yet that fringe element doesn’t need to go.  There’s just something that has gone on here politically.  My honesty is all I have at the end of the day.  I just want to clue you in on it.

There are things that have gone on here politically in the last 30 days that I did not foresee ever happening with Ron Paul or with Rand for that matter.  I’m not even talking about Rand’s endorsement.  I’m talking about other things here.  I’m observing that there is a trouble in paradise.  It’s one of these things where these movements like this are always hard to get any inertia going behind them anyway for any mass effect.

AG:  A number of the articles that have been written over the past couple weeks in terms of where the liberty movement goes from here.

AG:  The Washington Post had an article on this and said there are so many followers, is there a possibility that it kind of dies out because they’ve seen Dr. Paul as this beacon of light, the leader of the movement —

Mike:  Does it atrophy now?  There’s no blood going to it.

Mike:  Go beyond what some said is the “cult of Ron.”

AG:  The positive energy and enthusiasm that is surrounding this movement, you don’t want that to die out.  That would be a tragedy.

Mike:  It would be tragic, yes.

AG:  You always have to be careful in terms of motives of someone trying to step in and shepherd that group going forward.  That’s really a big question.  As you said, there’s a vacuum created once Congressman Paul retires in January.  What happens?  It’ll be interesting to see, especially if any sort of thing plays out here in Tampa at the RNC Convention over the next three days.

Mike:  And one thing we know, and I talked about this earlier in the broadcast, it will dawn on you when you come to an event like this that this is a business.  This is not the business of politics.  This is not the business of representative government.  This is a business.  This is an industry.  Therefore, it’s going to defy political reform.  I talked about this last night in my 22 minutes in front of the PaulFest crowd.  I actually said, before I knew any of this, “Let me tell you why I like Ron Paul.  It’s not because he’s a good speaker, because he isn’t.  It’s not because he’s overly handsome or anything like that and I’m attracted to him for any other quality.  It’s because and specifically and explicitly because of his 34-year record of devotion and fidelity to the U.S. Constitution” and I whip out my pocket Constitution.  I say, “That is why.  If you can show me other members of Congress that are like that, I will be equally as enamored with them and so should you.”

When you say, “Where does it go from here?” it goes to [r]epublicanism.  It goes back to that little r, which is why the theme under my speech, and I’m going to say it again, is if you can’t stop the sidewalk from being built in your town that’s being built with unconstitutionally-appropriated sidewalk funds, you’re certainly not going to stop the larger leviathan.  For the liberty movement, which has always been very bifurcated to start with, very atomized, made up of a bunch of radical autonomists, as someone once put it to me, that is a difficult thing to organize, Andrew.  They defy organization.  The fact that you were able to get 13,000 of them in one place last night is an amazing thing in and of itself.  Folks, I just wanted to mention that to you.  I would like for many of you, if you fancy yourself a member of this movement or see what the heck I’m talking about — should I play the video?  I’ve got the audio.

Mike:  Here is the video of Schiff last night bailing on the PaulFest.  Audio quality is not that good.

Peter Schiff:  This is what, if I go back in my texts, this is what I got from Jesse.  Jesse, “You might want to reconsider PaulFest.  The thing is bad news.”  “Why aren’t you guys involved?” I wrote him.  “Bad people are going to be there, a big fringe element.  We’re hoping the thing goes away.”  That’s the last I heard.

Female:  We got a bad rap the whole way along.  Did you feel like we were a fringe element?

Peter:  I didn’t know anything about it.  The other speakers, a lot of people were coming to it. I didn’t know.

Female:  Ask Sheriff Mack, Chuck Baldwin, Tom Woods, Lew Rockwell if they didn’t have a great time yesterday.  Talk to them.  Ask them.  Ask them personally.

Mike:  So he signs an autograph, gets in his cab and leaves.  So basically Benton runs — what’s going on with that?  You get a text message and you bail on an engagement that you’ve committed to?  What is that?

Mike:  Strange is not the, as I said — I’ll be the bad guy here.  Strange?  How ironic is it that my speech also contained a cry out to fathers in that audience, challenging those libertarian fathers to preach to their kids about vows.  Don’t take a vow if you have no intention of honoring it.  You take a vow to appear at a place like that — very troubling, ladies and gentlemen, very troubling. 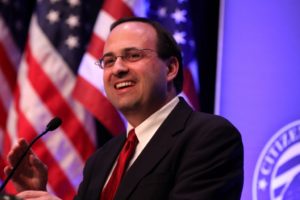 Taking into account all possibilities, it is *possible* that someone who personally knew Jesse’s cell phone number sent a spoofed text message to Peter. Of course, the only way to confirm all of this is to ask Jesse himself.

Mike, are you sure Schiff bailed on PaulFest? I thought that video was taken after he spoke, but I wasn’t there.

Mike, you’ve seen this before, but maybe it’s not ringing any bells.