It took years of experimenting with the ingredients, then the method, to perfect this any time of day, treat! If you follow the recipe carefully this recipe will produce 5-6 of the tallest, fluffiest and light, pancakes you’ve ever had and you’ll only need 1 per person! My wife and I have a special devotion to St Padre Pio and can tell “The Flying Monk” story by heart. I present a famous telling of the story below. 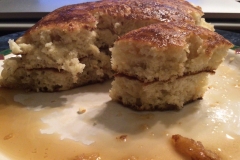 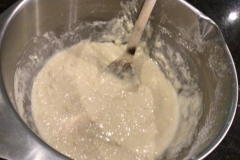 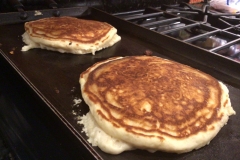 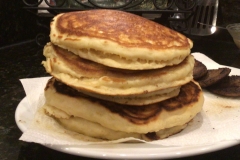 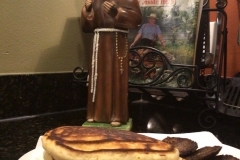 Combine the flour, sugar, salt, and baking powder in a large mixing bowl. Whisk to incorporate.

Separate the egg yolks from the whites put the yolks into a mixing bowl and reserve the whites in a separate bowl.

Beat the egg yolks for 90 second or until you have the beginnings of soft peaks. Reserve.

Beat the yolks for 60 seconds.

Combine the melted butter with the egg yolks and beat for one minute.

Add all the wet ingredients to the dry ingredients EXCEPT the egg whites! Using a wooden spoon turn the mixture about a dozen times THEN add the egg whites and incorporate until mixed thoroughly but still lumpy! Do NOT mix or whip until “smooth”, we want the lumps!

Let your batter stand for 10 minutes at room temperature. (at the end of this stage you MAY need to add 1/4 cup of milk to make the batter pliable enough to pour from the mixing bowl but only add if the batter looks like Play-Doh on the end of a wooden spoon!)

Preheat your griddle to medium-high until a pat of butter will dance on it but NOT turn dark brown and begin to burn. Keeping this temp through the process is crucial to achieving golden brown color and fluffiness.

Pour the batter and pancake batter into a melted pad of butter on your griddle until you make a 6 to 8 inch circle. Using the flat edge of your wooden spoon, smooth out the lumpy peaks but don’t “pat” or flatten!

Let the pancakes cook 2 minutes until you see bubbles forming on the entire surface and the cakes begin to cook around the edges, flip and then finish to a golden brown, about 90 seconds.

The Story of The Flying Monk Who Defended Petrolicino

Below passage was translated by Frank Rega from the Italian from the book: I Miracoli di Padre Pio, by Renzo Allegri,1993

Many Allied aviation pilots of various nationalities (English, American, Polish, Palestinian) and of varied religions (Catholic, Orthodox, Moslem, Protestant, Jewish) who during the Second World War, after September 8, 1943, were based in Bari to undertake missions on Italian territory, testified to an amazing occurrence.

Each time, while fulfilling their Italian military mission, they approached the zone of the Gargano, in the environs of San Giovanni Rotondo, they saw in the sky a Friar, who in stretching out his wounded hands, prevented them from dropping their bombs. Foggia and almost all of the centers of Puglia were subjected to repeated bombardment; on San Giovanni Rotondo not one bomb fell.

This event, which is to say the least unheard of, was directly witnessed by the general of Aeronautica Italiana Bernardo Rosini, who at that time was part of the “United Air Command” operating out of Bari with the Allied air forces. “Each time that the pilots returned from their missions,” General Rosini told me, “they spoke of this Friar that appeared in the sky and diverted their airplanes, making them turn back.

“Everyone laughed at these incredulous stories. But since the episodes kept recurring, the Commanding General decided to intervene personally. He took command of a squadron of bombers to destroy a cache of German war materials that was said to be right in San Giovanni Rotondo. Up until that time, no one had ever succeeded in going in that direction because of the presence in the air of that mysterious phantasm which forced the airplanes back.

“Since this had been happening for some time, at the base there was much apprehension. We were all curious to see the results of this operation. When the squadron returned, we went over to ask what had occurred. The American general was quite upset. He recounted that as soon as they arrived near the target, he and his pilots had seen rising up into the sky the figure of a monk with his hands held high. The bombs dropped all by themselves, falling in the woods, and the planes turned in retreat, without any intervention on the part of the pilots.

“That evening, the episode was the main topic of conversation. Everyone was wondering who was this specter which the airplanes mysteriously obeyed. Someone said to the Commanding general that at San Giovanni there lived a Priest with the stigmata whom everyone considered a saint, and that perhaps he was the very one responsible for diverting the planes. The general found this hard to believe, but as soon as it was possible, he wished to go there to find out.

“After the war, the general, accompanied by a few pilots, arrived at the Capuchin Convent. As soon as he crossed the threshold of the sacristy, he found himself facing a number of Friars, among whom he recognized immediately the one who had stopped his airplanes. Padre Pio went up to meet him, and putting a hand on his shoulders, said to him: “So it is you, the one who wished to do away with all of us”.

“Astonished at seeing and hearing the Friar, the general kneeled before him. Padre Pio had spoken in his usual Benevento dialect, but the general was convinced that the Priest has spoken in English. The two became friends. The general, who was a Protestant, converted to Catholicism. 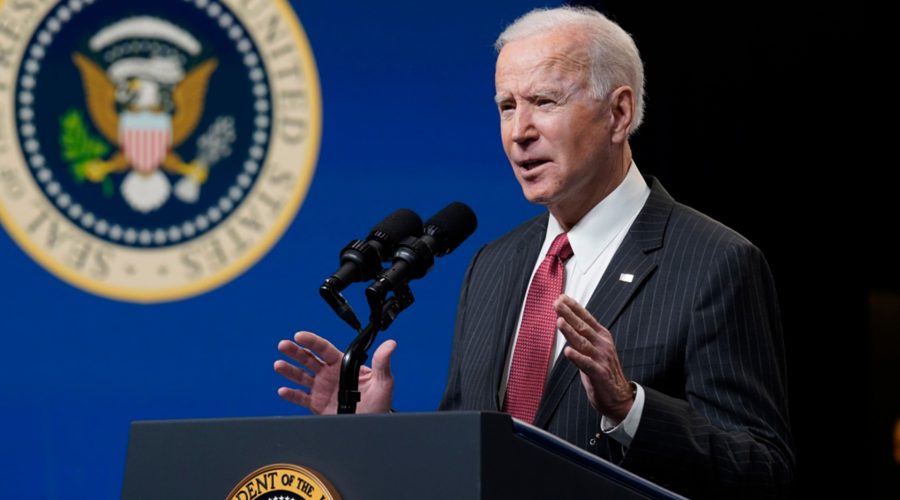 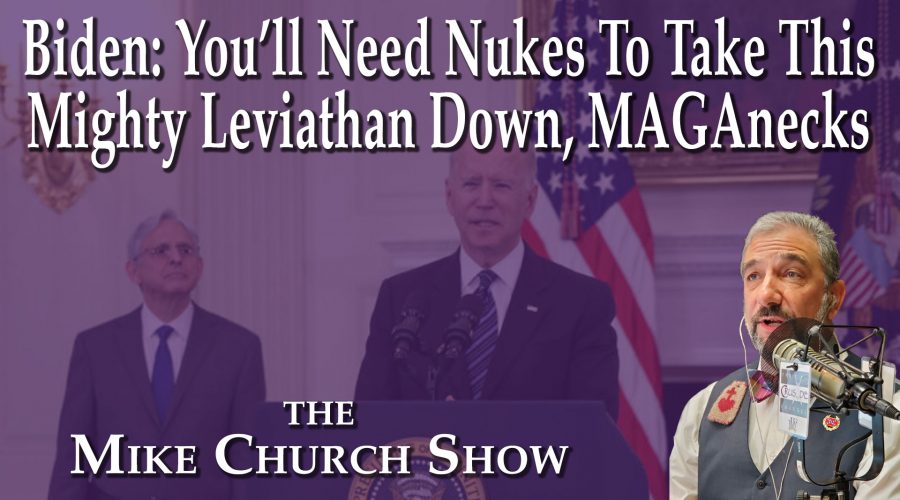 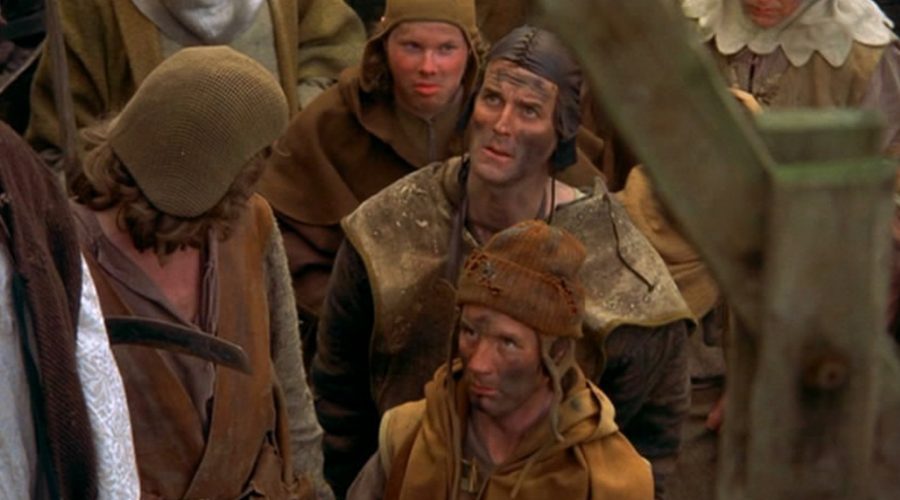 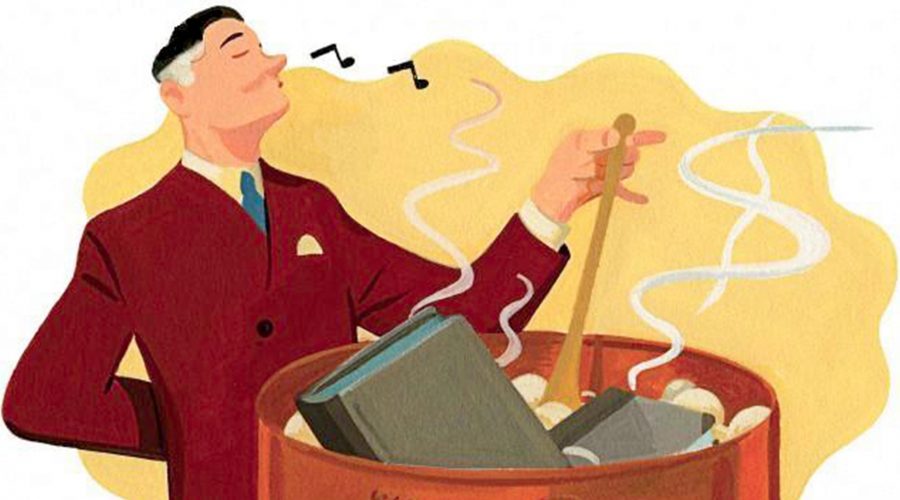 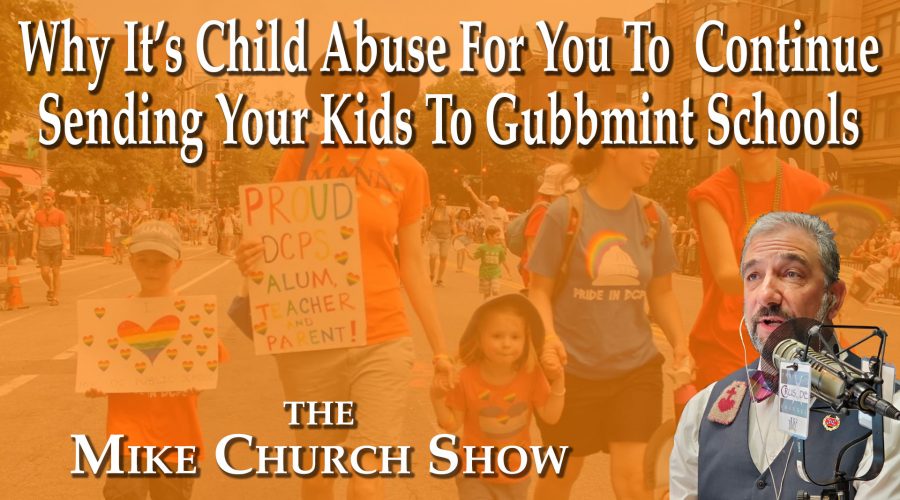 Tuesday Pile of Prep – The Doom In The Gubbmint Schools