Mandeville, LA – Exclusive Audio and Transcript – We have another Republican there saying, “We gotta keep that base open.  I don’t care if your kids have to pay for it all the way up to 2912.  It’s part of national defense.”  The ironic part is that it may actually be part of national defense, but since we have Air Force bases all hither and yon across the planet — that’s another great question.  You people in Mansfield, Ohio, would you trade keeping your Mansfield, Ohio National Air Guard base open for shutting one down in South Korea, Arabian Peninsula?

Mike:  So yesterday John Boehner, Speaker of the House, GOP conservative betrays all of his credentials I just previously mentioned by making a deal to keep the gubbmint running all the way through the beginning of next year.  No fights over the debt, no fights over spending, nothing.  We’re about to have the biggest, most highfalutin election in the history of highfalutin elections here.  We are told by the same people yet we may not, must not put the most important issue on the ballot.  Does anyone other than me have a major problem with that?  As a matter of fact, if I hear anyone say that this is the most important election of our lifetime, I am going to begin to hysterically laugh at them.  The most important issue in our lifetime, which is a mountain of debt that cannot be repaid and the continual adding to it will not be on the ballot as it could be.  I just gave a concrete, solid example, Mansfield, Ohio.  President Obama will land Air Force One in Mansfield, Ohio this morning.

“If President Obama has his way, his Air Force One arrival would be one of the final flights into Mansfield-Lahm Airport,” claims Senator Rob Portman, who is often a surrogate campaigner in Ohio for Mitt Romney.

Mike:  We have another Republican there saying, [mocking] “We gotta keep that base open.  I don’t care if your kids have to pay for it all the way up to 2912.  It’s part of national defense.”  The ironic part is that it may actually be part of national defense, but since we have Air Force bases all hither and yon across the planet — that’s another great question.  You people in Mansfield, Ohio, would you trade keeping your Mansfield, Ohio National Air Guard base open for shutting one down in South Korea, Arabian Peninsula?  I could get you a couple of sites we could trade for.  Back to the story:

The Mansfield News Journal has run a series of stories and editorials expressing local worries that the air mission of the 179th Airlift Wing of the Ohio Air National Guard will end if proposed Pentagon budget cuts close it down.  The local paper quotes Vice Commander Col. Michael Howard as saying he will park the wing’s C-27J aircraft on the tarmac in full view of Air Force One to make a point to the visiting president.  The 179th has four of the planes, two currently deployed in Afghanistan.  The newspaper reports the Air National Guard in Mansfield employs more than 200 airmen and more than 550 part-time employees.

The White House insists there is no plan to close down the Air National Guard base in Mansfield.  In fact, deputy press secretary Josh Earnest tells ABC News, “the President is committed to working with the Department of Defense to find a mission for Mansfield Lahm Air National Guard Base, so that the men and women who serve there can continue to make their important contribution to our national security.”

Mike:  Are you ever going to cut this spending or not?  You have the president campaigning and you have Bill Clinton out there running around saying Mr. Obama has been austere, he’s frugal, [mocking] “I don’t understand what all these conservatives want.  We’re cutting spending everywhere.”  You actually have a scheduled cut that is going to be implemented.  When faced with having to face the voters or the people of Mansfield, Ohio, no one has the stomach or the cojones to actually say, “Colonel, I’m sorry, sir, but we just don’t have the money to keep this particular Air Force base open anymore.  We’re going to have to close it.  We’re gonna have to stop taxing the future generation to pay for it.”  I know, I know, as I said, the great irony of it is that this may actually be national defense, but you have to have your empire across the rest of the planet.  You also have to pay for those empire Air National Guard or Air Force bases scattered across the globe.  Quite a situation we’ve gotten ourselves into, isn’t it?

So the solution to the problem would be close the bases down across the world, bring the troops home, and then for actual national defense, you’d have Mansfield Lahm Air Force base open and ready for Air National Guard that practices there.  End of story.  But we’re Americans and we have to have it all and we have to have it right now, even if our children have to repay it at twice the burden that we are currently paying ourselves.  Let us talk to Keith in Ohio.  How are you doing?

Caller Keith:  Good, Mike.  How are you doing?

Caller Keith:  I listen to your show regularly.  I’m a construction manager for the State of Ohio, but I’m also a United States Army reserve officer at Mansfield, which is about an hour northeast of here.  At the exact location that you are talking about, yes, I would gladly trade a base in South Korea for this base to stay open.  It’s a pretty integral part of logistics in this area of the state as far as moving United States Army Reserve troops and National Guard troops in and around this part of Ohio.  It’s kind of a flat-land part of Ohio between Columbus and Cleveland and there’s not a whole lot of resources there.

Actually we just, well, taxpayers, just built a $27 million United States Army National Guard joint complex at that location as well.  That’s where we’re out of now.  We were out of an ancient reserve center in the middle of Mansfield, Ohio.  In the past three years, they have built this and we have moved into it.  Basically, I was just commenting that gladly I would trade, with my experience in the military being pretty vast as far as traveling, let’s put it that way, I would gladly trade bringing the troops back in and closing some of these other bases up that are in and around the world that don’t really have a whole lot of —

Mike:  Keith, that’s why I said the great irony of the quandary that Mansfield Air National Guard Base is in is that you could, even in a constitutional sense of the word, you could make an argument that that particular base, and many others like it, is actually part of the common defense promise that is made in the Constitution.  It does exist inside an American state or a member state of the union.  It does provide, as you point out, a logistical place or contributes to the logistics of moving troops, moving cargo, moving supplies and what have you.  We may not always agree that we want a standing army, but I think being prepared to have one and having the militia, which is basically the Air National Guard and the National Guard trained and at the ready is a totally constitutional exercise.  It’s a responsible one.

You could actually make the case that even from where I sit, and if you listen to the show, you know my opinion about this, that a little Air Force base like Mansfield is probably something that you ought to have.  It is now in jeopardy because of the same people that love to run around and pound their fists and rattle their sabers about [mocking] “We’ve got to have national security!  We’re doing this for national security!”  The people that are going to be protected by and benefit from the security provided by bases like Mansfield Air Force Base may now find themselves in jeopardy because we have to fly sortie missions out of Yemen or we have to fly sortie missions wherever in the Middle East.  As you point out, yeah, I totally get what you’re saying about national and common defense, operative word defense, and the upkeep of the empire abroad.

Caller Keith:  It’s a typical notion of this administration where we can just have it all, let’s just keep everything open and just keep printing the money and it will be okay.  I’m with you 100 percent.  The way that the Reserves and the National Guard have functioned in these conflicts proves that we can use them in a greater capacity to defend this country, not offensively operate but defend this country from the perspective of the Reserves and the National Guard

Mike:  Keith, what about just defending Ohio?  You are a sovereign country.  Should people like me, should cooler heads prevail sometime in the near future, and should common sense be applied to the problem of an out-of-control government that will never rein itself in, and should the American Union actually be rethought, it may be your responsibility to safeguard yourself.  It may become Ohio’s responsibility to provide its own air defenses.  You’d need Mansfield.  Besides, it is promoted as an Air National Guard base.  As I say, the National Guard is basically the remnants of the state-run militia.  I say keep it open and shut down one in a foreign land.  Let’s make an even trade.  You cut spending, reduce the size of the empire, and the people of Mansfield are happy.  Keith, thank you very much for your phone call, friend.  It’s good to hear from you. 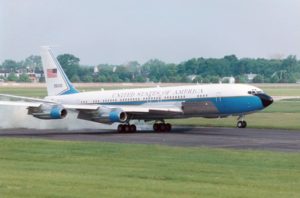 I agree. How about Bagram airbase just about 40 miles north of Kabul Afghanistan. The amount of money they are putting into construction cost on that base shows that it will be a permanent duty assignment for years to come.