Mike:  A gentleman that goes by the name of Breitbart’s Joel Pollak followed Rand after he spoke.  Pollak had some not-so-nice things to say about Rand Paul and the Randians in the room.  I believe there were actually boos.  We have the story from Jordan Bloom.  I should have called Jordan — he was there — and see if he wanted to make a five-minute appearance to tell us about this.  He’s got a nice post at AmConMag.com, American Conservative Magazine.

The commentariat’s rapidly-coalescing opinion seems to be that Rand Paul won [Mike: The debate with Joel Pollak of Breitbart. Rand’s speech is posted in today’s Pile of Prep if you would like to watch it.]. The audience remained standing in an homage to his almost-13-hour filibuster. The senator plopped tapes from the whole #RandStand down on the podium before delivering his speech, and even his (not-entirely-accurate) line about the incarceration of pot smokers received modest applause.

The senator was preceded by Marco Rubio, whose speech didn’t mention immigration and could be summed up in the line that garnered the largest applause–the GOP doesn’t need new ideas, “there is an idea, the idea is America, and it still works.”

You people do realize, you war-hungry decepticons, when you’re out there chortling on about the idea of America and then you throw in taxation without representation, what were the colonists being taxed for, geniuses?  Do you even know?  Do you know?  Let me clue you in.  You know what the colonists were being taxed for when they claimed no taxation without representation?  They were being taxed to pay for the British Empire’s wars.  Of course the Brits said: One of those wars we actually defended you from the French and the Indians, so fork it over, pal.  The colonists revolted when they were told that they had to pay for wars they did not want, that they did not participate in, that they thought they did not benefit from, and that they would not have sanctioned anyway so why should they have to pay for it?

This is another use, by the way, of the standing army.  The king was using a standing army.  This is why the issue of standing armies kept coming up over and over and over again during the 1780s and on into the debate over ratifying the Constitution, then into the debate over writing and ratifying the Second Amendment.  “America is an idea,” talk about nebulous.  Talk about just being a bumper sticker.  Do you remember certain radio hosts back in the day, not even three, four years ago, were making big hay about how the other party, the real stupid party, the stupid and evil party, the Dumbocrats party was nothing more than a bunch of slogans and bumper stickers and clichés.  What is “We don’t need a new idea.  America is the idea”?  I have an idea, Senator Rubio.  How about a new idea that’s actually an old idea?  Why don’t you try republicanism?  Just try it.  Just think about it.  [mocking] “I practice Republicanism with a capital R.”  No, little ‘r’ republicanism.  Is there anything that is as stupefying as that, you don’t need a new idea? 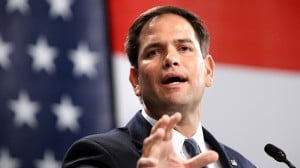 JTWilliams, fair enough as stated, but youthinks without offering a thought. Are you suggesting thoughtless rule?

We dont want to “apologize for freedom” now, do we?

Methinks, the tide is turning against GOP militarists. of course, the old operatives (Krauthammer, Gerson,etc) will be the last to know.