Mandeville, LA – Exclusive Audio and Transcript – The lack of seriousness at an event like Mass illustrates and is a great example of the collective lack of seriousness in all the other things we’re dealing with.  No one is serious about anything.  Is there no function now where there is call for decorum outside of a postcard being sent out that says “proper attire required”?  Should you have to send this out as a notice? Check out today’s transcript for more…

Mike:  I go to Mass yesterday.  If you don’t know, I am a Catholic, of the Catholic faith.  I am not always the best practitioner, I try.  I went to Mass yesterday.  I went to the parish I actually live in.  Some of you who have been listening for a while know that my preference has been, the last two years, to go to the traditional Catholic extraordinary High mass, which is said mostly in Latin and is very formulaic.  It’s as it has been presented basically since the creation of the church back in the third century.  I have not been to a regular, ordinary Mass since I started going to the extraordinary, the traditional High or Low Latin Mass.

Folks, I got to tell you, yesterday was — that 55 minutes spent inside that Mass yesterday was as eye-opening an experience and a window into our current collective crisis as anything that I could have gleaned from any political discussion that I have had or that you and I have enjoyed together on these radio airwaves over the last five years.  That, in and of itself, was Exhibit A evidence of our lack of seriousness.

You know how I say that we’re not serious about these things because we don’t propose serious solutions?  If we did, we wouldn’t be having these conversations about what we should do right now.  We should all agree that we’re not going to pass another nickel of debt on to the next year to be paid back.  We’re drawing the line right now.  Whoever doesn’t like it, get over it.  Get over yourself.  Too bad.  That’s the way it is, the way it’s going to be.  Whatever are the results from that, we would agree to undergo the short-term pain for holding out the prospect of the long-term benefit.  We’re not serious about it.  We’re not nominating serious people in either party to deal with it, although Paul Ryan is the most serious of all of them.  So the problem is going to continue and it ultimately is going to do what problems that fester do.  They are going to have catastrophic effects somewhere in the very near future.

So I go to church yesterday.  This is church, for crying out loud.  I put a pair of slacks on, a nice belt, my best Rod Patrick handmade in Mexico boots — they used to be made in Texas.  He moved the factory to Mexico, not me — a nice shirt and a blazer, what you should wear to mass.  It was me and one other gentlemen, the only of the 300 or so souls in there and the 125 or so men.  There were two of us that were in blazer and what I would say appropriate attire for a meeting at the Holy Church to meet with the representative of the Holy Father, who is a representative of Jesus Christ.  I’m not getting religious here.  This is really cultural.

I’m just disappointed by the men that show up with their children in tow, in Bermuda shorts and flip flops, Bermuda shirts and Hawaiian shirts and flip flops.  I may have done this in the past.  I have repented and will never do it again.  I’m just blown away.  The ushers, the official people, are in non-serious attire.  To me, this is as serious as it gets.  There should be a reverence associated with the attendance of the Mass.  Let me just give it to you as I see it.  The Catholic Church has a monstrous, huge problem right now.  It has let the reverence, total reverence for the sacred presence of the Lord in that Mass go away.  It has instead paved the way for the jovial — the priest yesterday was saying, “This is everyone’s Mass.  We come here to participate.”  No, you got it wrong.  We go there to submit.  You go there because you’re in the presence.  There is a chain of command there.  It’s supposed to be.

The lack of seriousness at an event like that illustrates and is a great example of the collective lack of seriousness in all the other things we’re dealing with.  No one is serious about anything.  Is there no function now where there is call for decorum outside of a postcard being sent out that says “proper attire required”?  Should you have to send this out as a notice?  Mike is in New Jersey.  How are you?

Caller Mike:  Hey, Mike.  I love the show.  I’ve been listening to you since my son joined up and fighting over in Afghanistan for our country.  There’s a comment I want to make about your remark on how people attend Mass and services.  It goes back to the old Goodfellas movie when . . . groceries out of respect.  You look back at baseball games in the ‘60s.  Everyone had a suit on and tie when they went to see the Yankees play.  Today we have our Mr. Obama there going on TV in khakis and sneakers to address the nation.  There’s just no respect anymore. 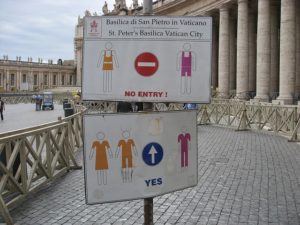 Good observations. But a quick note that the Church was not ‘created’ in the third century but was established by Jesus Himself and has the Pentecost as Her birthday. Respectfully, Arda

I no longer subscribe to the catholic faith, but when I did, I had many problems with church members at mass. Attire was one (especially with women). Other problems were the gossip sessions that went on in church before mass, receiving communion when one had not gone to confession first, and people thinking the mass was over after receiving communion and exiting church before the priest closed the mass. They’re are very few devout Catholics who attend church, and fewer who know how to conduct themselves.