Mandeville, LA – Exclusive Transcript – Are these things members of the United States Senate ought to be tweeting out?  These people are, after all, in a position to vote yes or no on treaties between foreign lands.  Calling elected leaders of foreign states monkeys? Check out today’s transcript for the rest…

After catching some flak for slyly calling Iran’s president a monkey on Twitter Monday, Sen. John McCain wondered what the fuss was about.

Mike:  McCain wants to know [mocking] “Why can’t you take a joke?  Screw you.  Screw it all.  You ought to be able to take a joke.  I was joking, you idiot, you understand, joking.”

That was after he took this swipe at President Mahmoud Ahmadinejad, who said Monday he wants to be the first Iranian astronaut in space.

Tweet: Re: So Ahmadinejad wants to be first Iranian in space – wasn’t he just there last week? “Iran launches monkey into space”

Mike:  Are these things members of the United States Senate ought to be tweeting out?  These people are, after all, in a position to vote yes or no on treaties between foreign lands.  Calling elected leaders of foreign states monkeys?

That prompted backlash on Twitter, including Rep. Justin Amash.

Tweet: Maybe you should wisen up & not make racist jokes. “@SenJohnMcCain: Re: Iran space tweet – lighten up folks, can’t everyone take a joke?”

Mike:  Why is that racist?  Ahmadinejad is Persian.  Is that a race?  I guess that is a race.  So because Ahmadinejad is — you have to tread so lightly these days, I’m almost afraid to even talk about this.  You want to explain why that’s racist?  I don’t get it.

AG:  The term monkey would be a racist term.  Throwing that around would constitute the racial aspect of it.  Amash is 32 years old, I think.  I think the younger people have seen calling someone a monkey, particularly black people, has been deemed racist my entire life.

Mike:  Yeah, but Ahmadinejad is not black.

AG:  Right.  That’s where I think McCain is trying to — McCain wouldn’t have said that about the president of Tanzania if he had something similar.  I think he would have stayed away from that.  I think that’s what he’s trying to say: It wasn’t about a black person that I used the term monkey.  Everyone would have jumped on that immediately as racist.  I think Amash is saying you’re still trying to call someone of a different race — whether or not Persian is a different race I think is immaterial.  Amash is going by you’re calling someone of a different race less than intelligent.  That’s where the racial aspect of it comes into play.

Mike:  How about you’re a United States senator and you’re calling a democratically-elected — isn’t that funny, we all pine away for women in the Middle East with purple-stained fingers because they voted, but when they vote the wrong way we can’t stand it.  [mocking] “You didn’t vote for who we wanted you to vote for, you idiot.”  Isn’t it more embarrassing that you have a member of the United States Senate calling a democratically-elected — whether you agree with the election results or not, Ahmadinejad was elected — the elected leader of a country of 80 million people a monkey?  Let’s pick somebody that’s offendable.  Who’s white, Christian — Jim DeMint, former Senator DeMint.  If McCain called DeMint, when he was in the Senate, a monkey, would that have caused a stir?  Maybe in the Senate cloakroom it would have.  It wouldn’t have gotten MSNBC’s underwear all up in a wad, would it?

AG:  We get back to, though, from a couple weeks ago, Sarah Palin’s “shuck and jive” and her response that she says it to her child when she’s misbehaving and doesn’t want to do her chores.  You’re back to the question of are there different language rules according to what race a person is?  Because Ahmadinejad’s skin tone is darker than a white person’s, are there different language policies, what society views as racial or not according to one person’s skin tone.  Whether or not that’s fair or correct or should be the case is probably a different question.

Mike:  I would stick with members of the Senate should not be using animal slang against any democratically-elected leader of any foreign entity.  That, to me, is where McCain has crossed the line.  This whole discussion about — again, these are on Twitter feeds.  These are limited by space and characters.  You can only put so much on there.  You have to get really creative and inventive to draw people’s attention.  Apparently people are getting really good at being creative and inventive and provocative.

What if McCain had said this long form and this had been part of a speech, a single line from a speech on C-SPAN?  I bet you no one would have heard it.  Anyone that would have heard it, any of the grannies sitting around watching C-SPAN 2 on any given day probably would have missed it, unless he made a big whoop-de-doo deal about it.  How long before we negotiate our first nuclear arms limitation treaty via Twitter?  [mocking] @BarackObama to @Vladimir Putin “Hey, Vlad, I’ll trade you 1600 50-megaton neutron bombs for 1601 of the Soviet variety.  Can we meet in a Facebook chat room?”  Is this where we’re headed with all this? 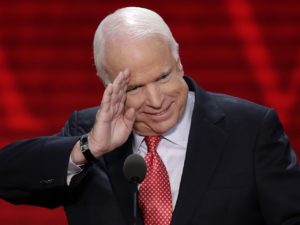 Iranians call the the Jews descended of what ever which is stupid for public official to be doing so why can’t John . Hey! Just joking right .