Mandeville, LA – Exclusive Transcript – We all know the story.  It’s a sad, tragic story.  Again, they had a handgun ban in Chicago.  It didn’t save that little girl’s life.  Do you really think background checks or gun registries for the madman that took that little girl’s life would have saved it?  Please.  There’s just something really, really — it is disconcerting to see children manipulated and used in the manner they’re being used as props for the naked political ambitions of our elite, anointed rulers, isn’t it?  Check out today’s transcript for the rest…

First Lady Michelle Obama, with tears in her eyes and voice cracking, spoke out for the first time here Wednesday about the gun violence afflicting young people in cities across the nation.

She took a rare step for any first lady into the legislative fight of the hour, saying her husband, President Obama, is “fighting as hard as he can, and engaging as many people as he can, to pass common-sense reforms to protect our children from gun violence.”

Mike:  Is there anyone out there that will dare to make the case that maybe sometimes children actually are protected by gun violence by other people wielding guns?  You know, good cop / bad cop.  You know, the guy that has the weapon in the house, guarding the child against the lunatics outside that have the weapons trying to get at the child?  You know, maybe the person that intervenes in betwixt some marauding maniac with a weapon and the child with a weapon of his own?  That’s one of the amazing things about this.  You so rarely hear about efforts at self-defense.  Every day of the week, there’s story after story.  If you bother to look, you can find them all over the amber waves of fuel.  There are all kinds of stories out there, on almost any given day, of people whose lives actually have been saved from bad guys wielding guns because the good guys had them, too.  Again, though, none of this has anything to do with the purpose and the reason why there was a Second Amendment.

“These reforms deserve a vote in Congress,” she said…

Mike:  That’s the money line right there.  Again, you know and I know that what they’re talking about is not going to pass, so why does it deserve a vote?  It deserves a vote so that whoever votes against it can then be brought to trial in this thing called a campaign in 2014, and then we can field moderately conservative Democrat candidates who say: Look, I’m all for the Second Amendment, but that man over there shouldn’t have voted against that.  That bill saves children.  It doesn’t have anything to do with the Second Amendment.  It’s kind of the same plan that was executed in 2006 by Ms. Pelosi.  The operate words, again, “These reforms deserve a vote in Congress.”

We ought to have a hashtag on Twitter today.  You people have been pretty much dead, mortis, on life support on the @TheKingDude the last two weeks.  I continue to marvel over the lack of activity.  It doesn’t matter, I could post 600 tweets a day and I get 11 responses.  Try this one, #deserveavoteincongress.  What else deserves a vote in Congress?

Obama spoke emotionally about attending the funeral in February of Hadiya Pendleton, a 15-year-old majorette who was shot in a city park not far from the Obamas’ Chicago house and just days after visiting Washington for President Obama’s inauguration ceremonies.

Mike:  We all know the story.  It’s a sad, tragic story.  Again, they had a handgun ban in Chicago.  It didn’t save that little girl’s life.  Do you really think background checks or gun registries for the madman that took that little girl’s life would have saved it?  Please.  There’s just something really, really — it is disconcerting to see children manipulated and used in the manner they’re being used as props for the naked political ambitions of our elite, anointed rulers, isn’t it?

“As I visited with the Pendleton family at Hadiya’s funeral, I couldn’t get over how familiar they felt to me, because what I realized was Hadiya’s family was just like my family,” the first lady said. “Hadiya Pendleton was me, and I was her. But I got to grow up and go to Princeton and Harvard Law School and have a career and a family, and the most blessed life I could ever imagine. And Hadiya — well, we know that story.”

The first lady described how Pendleton was an honors student and had two devoted parents who were “hardworking people” and “churchgoing folks.” She said the Pendletons enrolled Hadiya in cheerleading and dance classes, as well as the majorette troop, to keep her active and out of harm’s way.

Mike:  Were you able to find the audio on that?

AG:  Yeah, I have some of the First Lady.

Mike:  The parts that I just read I actually heard yesterday.  I think Fox News cut into that live.  I know I heard it.  One more point on this.  Michelle Obama was talking about how this little girl’s life was stolen from her and that she was never going to have a life and experience certain things all because someone had a handgun.  Because that person had a handgun and misused it, that means that we can stop people from misusing things.  That’s the implication here.  Remember, last time we had audio of President Obama saying, [mocking] “We gotta do this.  We gotta pass this bill to prevent this from ever happening again.”  I said to you: What if you pass the bill and it does happen again?  What will you say then?  [mocking] “We need this next bill here to prevent this from ever happening again.”

Is there any way to really prevent any of this stuff from really ever happening again, short of, wait for it, a total outright confiscation or an end to the gun trade?  Do you really think — last time I saw a statistic on this, the number is shocking, amazing — not shocking in a bad way, just amazing.  There were somewhere on the order of 650 to 675 million weapons held by private citizens in the United States.  Think about that, 675 million weapons privately held in the United States.  That’s a lot of weapons.  What is the possibility you’re ever going to get all those weapons out of the hands of all of those people?  I’ll tell you what the possibility of that is.  (audio – Dean Wormer of Animal House: “Zero point zero.”)  It ain’t gonna happen.

So in the meanwhile, while we can’t stop little Hadiyas from getting shot, what can we do?  [mocking] “We can win elections.  Yay!  We can have power.  Yay!  We can tax and spend and spend and tax and tax and spend!  We can do all sorts of cool things.”  And this is the best part, they must say behind closed doors, [mocking] “We can pretend like we’re trying to do something about that the whole time we’re winning the elections.  Yay!” 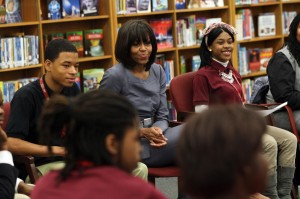