Mandeville, LA – Exclusive Transcript – “Protestant Martin Luther King, Jr. has just quoted St. Augustine and St. Thomas Aquinas on why there are just laws and unjust laws. Glory be the day that we have a member of the Roman Catholic clergy that has such bravery to do so in public. Yes, I know there are some. That’s not meant as a blanket statement.”  Check out today’s transcript for the rest….

Mike:  Reverend Martin Luther King, Jr. wrote in longhand the letter which follows.  It was his response to a public statement of concern and caution issued by eight white religious leaders of the South.  Even in this piece they call him Dr. King.  The Reverend King was born in 1929, did his undergraduate work at Morehouse College, attended the integrated Crozer Theological Seminary in Chester, Pennsylvania, was one of six black pupils among 100 students, and the president of this class.  He won a fellowship to Boston University for his PhD.

I’m not going to read the whole letter because it’s quite lengthy, but I am going to read a significant part of it that I think illustrates this.  Here’s the Reverend King dishing out truth, sapientia et veritas, to a bunch of white guys that are claiming the mantle of Christianity, and that it’s a good thing that he’s locked up in a jail cell.  Here’s part of the Reverend King’s response:

You express a great deal of anxiety over our willingness to break laws. This is certainly a legitimate concern. Since we so diligently urge people to obey the Supreme Court’s decision of 1954 outlawing segregation in the public schools, it is rather strange and paradoxical to find us consciously breaking laws. One may well ask, “How can you advocate breaking some laws and obeying others?” The answer is found in the fact that there are two types of laws: There are just and there are unjust laws. I would agree with Saint Augustine that “An unjust law is no law at all.”

Mike:  Folks, if we could just get a member of the Roman Catholic clergy that’s in the public today to quote St. Augustine, what a great day that would be.  Here’s the Reverend King quoting St. Augustine from a jail cell.  He’s invoking Augustine against his Christian tormentors, or those that are saying he’s in the wrong and he ought to be locked up.  He continues:

Instead of whining and complaining about how unfair the holiday and there’s no white guy holiday, there is something we can actually learn and we can use King’s work to learn it.  Of the unjust law that is legal abortion, who is it meted out against to principally.  It is disproportionately visited upon soon-to-be-born black babies, black children.  The number of abortions that black women undergo every year is three times – I think the latest Pew Research survey showed – the amount per capita of any other race.  In other words, there are more potential recipients of just law and of civil rights being killed, murdered in their mothers’ wombs, than there are white children.

This is the brainchild here of Margaret Sanger, Mrs. Clinton’s muse.  The evil, despicable, diabolical, satanic Margaret Sanger was an admitted, avowed female Hitler.  She was a eugenicist when it was popular to be a eugenicist and say that blacks, that we need to selectively allow only selective breeding of blacks.  Anyone that thinks that abortion is not the spawn of eugenic-seeking, diabolically-inspired people is just not – you’re not conforming your mind to reality.  You can see it in who it is, the defenseless black child, that is killed in his mother’s womb, admittedly by her choice.

Donald Trump: We broke the record. We had the record for about three or four years the last time. The first thing I said to Jerry and Becky when I got here, “Did we break the record?” They said, “Yes, you did, by quite a bit.” We’ll dedicate that to Martin Luther King, a great man. That’s a little bit of an achievement, I will tell you. 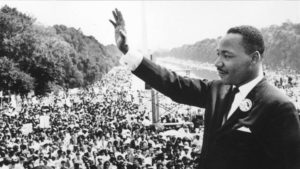 Mike:  Protestant Martin Luther King, Jr. has just quoted St. Augustine and St. Thomas Aquinas on why there are just laws and unjust laws. Glory be the day that we have a member of the Roman Catholic clergy that has such bravery to do so in public. Yes, I know there are some. That’s not meant as a blanket statement.  Folks, especially those of you that attend Novus Ordo masses and then call this show to share your grief and shock in what you see there, you know of what I speak.  Back to the Reverend King:

To put it in the terms of Saint Thomas Aquinas, an unjust law is a human law that is not rooted in eternal and natural law. Any law that uplifts human personality is just. Any law that degrades human personality is unjust. All segregation statues are unjust because segregation distorts the soul and damages the personality. It gives the segregator a false sense of superiority, and the segregated a false sense of inferiority. To use the words of Martin Buber, the great Jewish philosopher, segregation substitutes an “I-it” relationship for the “I-thou” relationship, and ends up relegating persons to the status of things. So segregation is not only politically, economically and sociologically unsound, but it is morally wrong and sinful.

Mike:  Can you imagine this?  Does anyone that’s still a crusader out there for civil rights ever use the word sinful anymore?  Heck, when was the last time you heard anyone publically use the word sinful?  Call me and tell me.  If it wasn’t me or David Simpson or Brother Andre Marie on Reconquest or Chris Ferrara on this show, who said it?  I’m doing my best to do a little homage here to the Reverend Martin Luther King because his reason for civil rights is theological and a spiritual one.  It’s not a legal one, although he was talking about laws and about legalities.  He’s ultimately, though, basing what it is that he’s saying here on theology.  It’s a good argument.  People have forgotten this.

Paul Tillich has said that sin is separation. Isn’t segregation an existential expression of man’s tragic separation, an express of his awful estrangement, his terrible sinfulness. So I can urge them to disobey segregation ordinances because they are morally wrong.

Mike:  I know what some of you are thinking right now.  [mocking] “Segregation that separated everyone else from Muslims, would that be okay?”  Remember, error has no rights.  Yes, it’s morally defensible.  You may not want to implement it simply because you may think that you can convert the erroneous Muslim.  If you’re going to say that, but if society or civilization is not up to that task, then certainly it would be permissible.  Back to King:

Have you tried the all new Veritas Radio Network yet? You can listen to the Mike Church Show LIVE weekdays 8-11 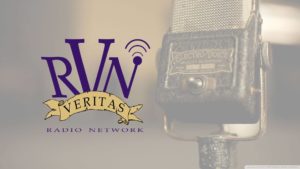 CST. The show is easier to access than ever before.  But Veritas Radio isn’t JUST Mike Church, try the exclusive shows by Brother Andre: ReConquest, David Simpson’s True Money, The Mark Kreslins Show, My Story of America with Michael T George, Reverse Deception with Gregory Carpenter and The Constitution Hour with Kevin Gutzman.  Help us continue our search for TRUTH by signing up for a Founders Pass Membership today!

Let me give another explanation. An unjust law is a code inflicted upon a minority which that minority had no part in enacting or creating because they did not have the unhampered right to vote. Who can say that the legislature of Alabama which set up the segregation laws was democratically elected? Throughout the state of Alabama all types of conniving methods are used to prevent Negroes from becoming registered voters and there are some counties without a single Negro registered to vote despite the fact that the Negro constitutes a majority of the population. Can any law set up in such a state be considered democratically structured?

These are just a few examples of unjust and just laws. There are some instances when a law is just on its face and unjust in its application. For instance, I was arrested Friday on charge of parading without a permit. Now there is nothing wrong with an ordinance which requires a permit for a parade, but when the ordinance is used to preserve segregation and to deny citizens the First Amendment privilege of peaceful assembly and peaceful protest, then it becomes unjust. [Mike: He should have referred to the free speech statute that’s in the Alabama constitution, not the federal one, but we’ll let his incorporationistaism, we’ll let it slide in this instance.]

Of course, there is nothing new about this kind of civil disobedience.