Truth Can Unify Us All

Mike:  Two subjects that I wanted to deal with here in this segment.  One is this essay, “How Can Conservatives Win the Debate?”  You can’t win the debate about conservatives until you can define what conservatism or what a conservative is.  In other words, you can’t defend something unless you know what it is.  Can anyone tell me what a conservative is?  Describe him to me.  Let’s see if there’s a universal agreement.  The last caller that we had, Richard from Texas, he hit the nail on the head when he said there’s nothing that people can gather around, coalesce around, be collected around.

The reason for that is because we have rejected truth.  We have rejected the known truth.  It is truth that can unify.  It is truth that the alternative to is falseness.  Most people say that they want truth, unless you’re in the movie A Few Good Men, and then you can’t handle the truth.  Like that clip that we played the other day from Monty Python: “I want to be a woman.”  Why do you want to be a woman?  “I want to have a baby.”  You can’t have a baby.  You can organize around the truth, around solidarity.  There’s so much confusion as to what is true and so much nominalism and apostasy and heresy directed and hurled at the truth every day, it’s impossible to know what the truth is.  A conservative, it would seem to me, would want to conserve the truth.  If you want to conserve the truth, you would need to know what it is.

Here’s what Brooks writes about conservatives.  I want to laugh and I want to cry at the same time as I read this.  I’m going to bring this one into the mix, too, “Barack Obama’s Defense of Slavery” by Joseph Pearce.  First, here’s how Arthur Brooks begins.  This whole thing is just a bumper sticker to me.  It means absolutely nothing.  It’s going to mean nothing to you, too.  It’s no wonder conservatism cannot be defined and therefore cannot be defended any longer.

My American Enterprise Institute colleague, Jonah Goldberg, recently wrote a book entitled The Tyranny of Clichés. One of the clichés is that conservatives are rigid, judgmental ideologues . . .

Mike:  I have news for your, Mr. Brooks.  Conservatives are rigid, judgmental ideologues.  They practice ideology.  They’re not in pursuance of the truth.  They’re in the pursuance of stoicism.  They’ve been told that certain things are allegedly true.  They have never actually contemplated them or investigated them.  Instead of doing that, they just: Okay, so I’m going to defend this.  Okay.  Defend what?  Oh, conservatives are for family values.  What’s a family value?  The greatest family value on earth would be practicing and doing everything in your house, in the familial sense, toward the single, unitary goal of getting your children to Heaven.  Gentlemen, that’s your job.  Get your wives and your children to Heaven.

This is a misunderstanding. Conservatives are not too moralistic—they are not moralistic enough! When it comes to the kitchen-table policy issues that affect most American families, progressives make bold proclamations about fairness and social justice that sail by, virtually unquestioned. Conservatives, on the other hand, come across as wonky, unfeeling materialists whose primary focus is money. The left talks about the human experience while the right talks about GDP growth, tax rates, and spending levels.

This is one of the greatest political ironies of our time: In fact, it is materialistic to presume that money and the redistribution of wealth alone can solve tangled social problems. It is materialistic to conflate human dignity with one’s position on the income scale, and to assert that anyone is oppressed if others earn more than they do. But when progressives present their views to the American people, they often wrap these fundamentally materialistic premises in richly moral language. And voters reward them for it.

Conversely, deep down, conservatives tend to be moralists. Conservatism, at its best, is a series of courageous—and, frankly, ­subversive—moral assertions about what it means to be human. [Mike: This is where this train just goes off the rails, folks. I say this to you from my point of view. If I’m wrong, correct me. I’ll try to prove to you why this is just another cliché waiting to become a cliché.] We assert that there is great raw material in every single person, regardless of their circumstances. This is a revolutionary stance! We assert that providing pathways to work and holding people to high moral standards are acts not of condescension but of brotherly love. We assert that the deep principles of justice require far more of us than simply rejiggering the distribution of wealth.

Yet when we make our case to the American people, we usually wrap these noble concepts in the hideous packaging of materialism. When we cheerlead entrepreneurship, for example, we usually heap praise on rags-to-riches outliers who are now multinational executives. Seldom do we explain that the entrepreneurial spirit is priceless because it captures the American spirit in each of our lives. 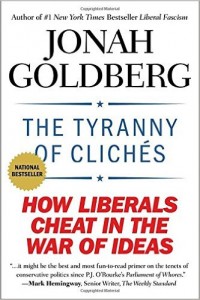 I’m going to give you an example of this.  Most people don’t give a single solitary thought to pledging allegiance to the flag or singing the national anthem before a sporting event at a local school, not a thought.  Do you even know what the state song of your state is?  Do you know it?  Most states have an anthem.  Why is there an anthem to the Union?  Why is the basketball game, does it not go on unless there’s a Union?  How preposterous is this?  Do you really believe little Jimmy Ledbetter and his four buddies that are on the starting five on the Peoria, Illinois Husky basketball team, that they couldn’t play a basketball game if it was just Illinois not Illinois part of America?  Really?  That’s how sick this is.

This is ideology.  It is a practice of ideology.  It is rote and regimen.  It’s perfunctory but it’s the practice of ideology of the American civil religion.  Sing the national anthem before a sporting event.  There’s nothing inherently wrong with it.  Don’t get me wrong.  Don’t misunderstand.  I’m not telling you that you should be firing emails off or making phone calls to your son’s basketball or baseball or daughter’s soccer team or whatever, [mocking] “Hey you, Coach Witherspoon.  No more national anthems.  You’re not going to get me in your ideological – you’re not going to box me in your ideological bag anymore, pal.”  It’s the point of the mindset that it is not questioned.  It goes without saying that you’re going to do that.  It’s wholesome and people’s hearts swell.  Would not people’s hearts swell if we were truly a Christian nation if the “Our Father” was said instead of the Pledge of Allegiance?

To who do you owe the grace that was granted to have the basketball court to be built in the first place, to have the basketball, to have the resources, the materials, to actually draw breath, to be alive?  Remember, you’re a contingent being.  I realize this show has a little bit of a philosophical slant to it today.  I think we need it.  Saying the “Pater Noster” or the “Our Father” before a sporting event puts you in the right frame of mind.  Our Father who art in Heaven, hallowed be thy name. (not Washington’s)  Thy kingdom come, (not Mordor’s) thy will be done, (not Congressman Scalise’s or the American Army) here on Earth as it is in Heaven.  Think about these things.  Give us this day our daily bread.  Does the army provide you bread?  Does the flag, Francis Scott Key, provide you bread?  No.  Does America?  No.  The Earth does.  The work of human hands does. This is a total disconnect from the way things ought to be.

As a tangible example, take the seemingly interminable debates over minimum wage. Raising the minimum wage is a surprisingly bad instrument for achieving a worthy goal—namely, boosting the incomes

In theory, there are two ways politicians could right the ship.

Mike:  Again, why is it left up to the political class to right the ship?  Because we believe in the American civil religion, that’s why.  That’s the way it has to be.  That’s the storyline.  Tote the bale, haul the barge, and get with the program, Mr. Church.  For those of you that are not with the program, what is wrong with you?  This is the way things are meant to be.

0Shares
Americanismcivil religionconservatismConservativesideologynationalismparty politics
Previous PostTuesday Prep-The Prophecy Of A ‘Murcah As A Corrupt, Oppressive Aristocracy Has Come TrueNext PostYes Trumpzilla Won, No Dancing On Cruz & Beck’s Grave Is NOT Cool And It ain’t Catholic Either