“Here is what I have to tell you, Dwight Eisenhower, Mr. President, head of our great nation: Unless you become a Catholic, a Roman Catholic, before you die and unless you…become an adopted son of God the Father…and a child of the Blessed Virgin Mary…you will never save your soul.”

I am publishing some of the notes I used for this talk, thus the post is not intended as a transcript but as a guide that contains some of the text and most of what I cited from other sources i.e. G.K. Chesterton and From The Rooftops. If you want the entire set of notes plus photos from the talk, please support my traveling apostolate and purchase the full length talk from my On-Demand store here.

Brian Kelly attended the Saint Benedict Center Conference and published a summary of my talk. I am humbled to republish it here and than Brian and the SBC for the salutation.

“Mike Church was with us again this year. The title of his talk Vocatio Viri: “How I Learned Stop Worrying And Save The Free World” demanded an explanation. And Mr. Church, as anyone knows who has listened to his radio program, knows how to impel a curious audience. By baptism, we are all called. Vocation is a calling from God, an abiding full-time job to be fulfilled on earth. Our speaker began with a brief summation of his own reversion back to the Catholic Faith in 2010. By 2012 he was a “traditional” Catholic. And what did he do about his Vocatio? He brought it into his radio show with both barrels blazing. Inevitably this got him fired. And getting fired was the grace that moved him to launch his own radio station. So, our speaker, uses his program to fight the good fight and reach souls with the truth. Quoting Saint John Paul II, he said: “Do not say I am only one person, what can I do?” Look at Father Feeney, he said. Numbers don’t matter. There were only eleven good Apostles! “Father Feeney did not take his vocation as an adjective or noun, but as a verb.” Now that’s quotable. That’s propelling! The presentation ended gloriously with a tribute to Saint Joseph.” 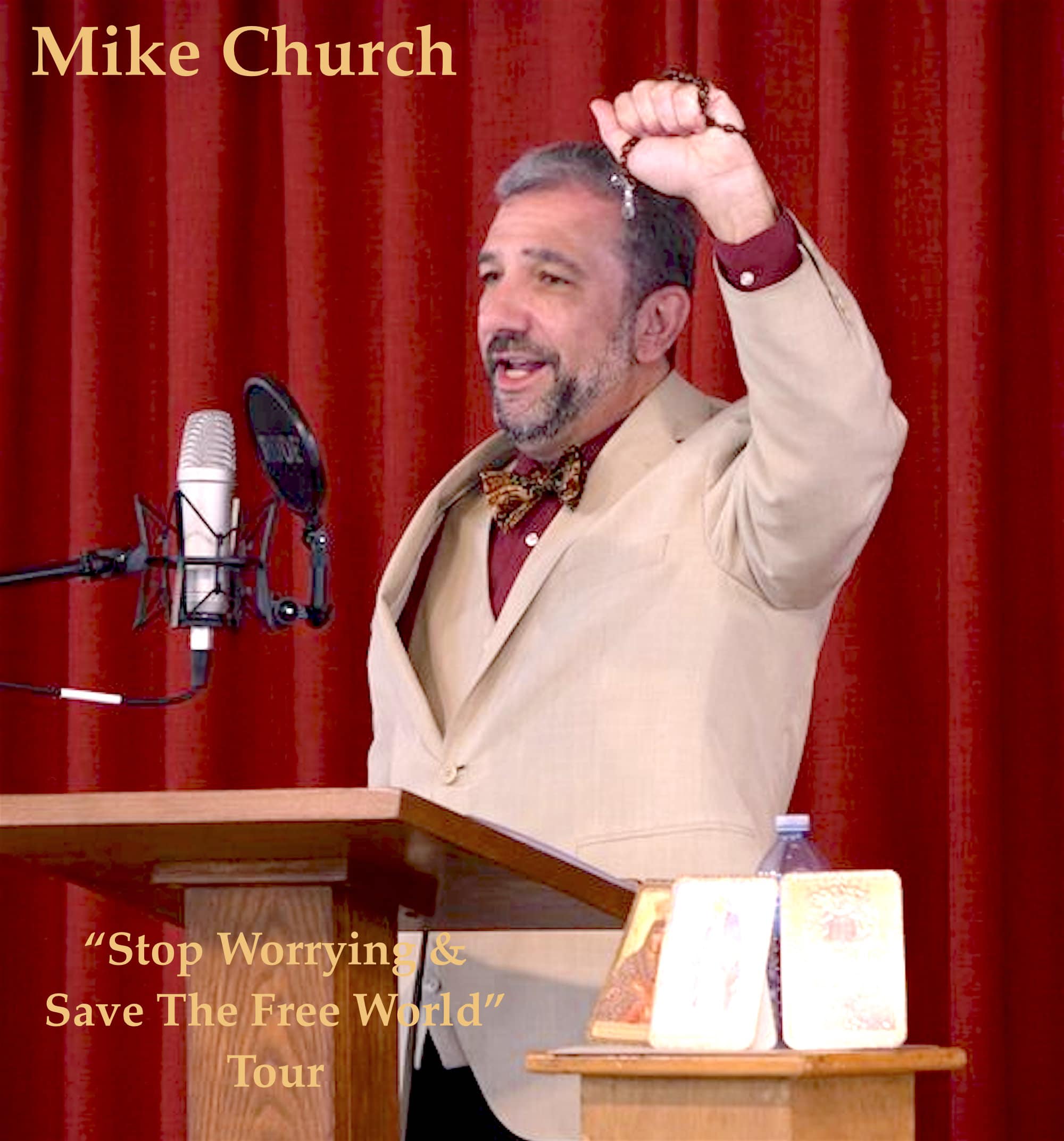 How I learned To Stop Worrying And Save The World.

INTRO: My biography and walk with Our Lady. [Who I was and how the Holy Family saved me.]
POINT 1 – There’s only 1 reconciliation and one act of contrition so why do we treat Sin as though it only occurs at home?
• Begin with a JP II quote:

“Man is called to a fullness of life which far exceeds the dimensions of his earthly existence, because it consists in sharing the very life of God. The loftiness of this supernatural vocation reveals the greatness and the inestimable value of human life even in its temporal phase.”

• The Modern World has taught us a powerful and fatally flawed lesson: he who dies with the most toys wins. As my friend Joseph Pearce reminded me recently this should actually say…

“…he who dies with the most toys dies.”

• This comes from the heresy of Americanism & can be summed up like this: “To pursue material wealth AS a path to salvation” and that is what we are to discuss tonight.

• Let’s begin with a simple revolutionary concept here: we are Roman Catholics for a reason: we believe that heaven cannot be found in a hash or an ice cream container made by hippy apostates in Vermont. We also believe that Heaven is a place to direct all our effort and energy into obtaining and it isn’t of this world. In fact this world can’t be heaven because it is filled with demons and I’m not just talking about the Democrat party.

“Here is what I have to tell you, Dwight Eisenhower, Mr. President, head of our great nation: Unless you become a Catholic, a Roman Catholic, before you die and unless you…become an adopted son of God the Father…and a child of the Blessed Virgin Mary…you will never save your soul.”

[Talk – living our vocations as gentlemen – in all that we do]

“It is quite certain that the skirt means female dignity, not female submission; it can be proved by the simplest of all tests. No ruler would deliberately dress up in the recognized fetters of a slave; no judge would appear covered with broad arrows. But when men wish to be safely impressive, as judges, priests or kings, they do wear skirts, the long, trailing robes of female dignity The whole world is under petticoat government; for even men wear petticoats when they wish to govern.” (Of course the Catholic Chesterton would change Cassock from petticoat.)

• Importance of Papal decrees/encyclicals on these topics.

Pius XII on Feast of St Joseph the worker: “O glorious Patriarch, Saint Joseph, humble and just artisan of Nazareth, thou hast given to all Christians and particularly to us an example of a perfect life through diligent labor and admirable union with Jesus and Mary. Assist us in our daily work in order that we, Catholic artisans, may also see in it an effective means of glorifying God, of sanctifying ourselves, and of being a useful member in the society in which we live. These should be the highest ideals for all our actions.”

[ Talk on imitation of Christ as gentlemen at work.]

[Conclusion – the easy way vs the virtuous way.]

My reading of the Memorare in the Latin prayer. Thank you, may God Bless you and Mary keep you.