Mandeville, LA – Exclusive Transcript – Do not agree with me.  You need to agree with the truth and with the correct historical record (and what it says about US military interventions).  That’s what I try to stand for and live up to.  That is my measure. You’re not agreeing with me, unless we’re talking about matters of God and transcendency and what we ought to do next.  You’re agreeing with history.  You’re agreeing with the way things actually happened not the way we would like them to have happened, or the way demagogic designing men and women want them to happen so they can sell you books and television shows.  There’s a difference. Check out today’s audio and transcript for the rest…

Mike:  Steve in Pennsylvania is next.  Hello, Steve.

Caller Steve:  Hey, Mr. Church, love the show.  Thanks for having me on.

Caller Steve:  I just wanted to go back to what you were saying.  I agree with you.  I do believe the founding fathers had the idea of keeping the United States a global sovereignty and not getting involved in overseas affairs and other nations’ affairs.  In your opinion, would you think that any of their ideas would have changed with the failed actions of appeasement with Hitler through Neville Chamberlain and Poland surrendering to Hitler prior to World War II?

Mike:  First of all, I can’t answer the question in the manner you asked it because your history is totally incomplete and incorrect.  I suggest you read Patrick Buchanan’s book about the run-up to what we know today as World War II before you start proclaiming this bumper sticker that you’ve heard on talk radio about Neville Chamberlain being the great appeaser.  I suggest you read Buchanan’s wonderful, thoughtful, well-researched analysis of what actually happened.  Then you probably won’t ask the same question.

In regards to that, you’re also conflating, and it’s a very convenient thing for many people to do because we are Americans and we are exceptional.  You’re conflating that somehow if we had directed those affairs they would have turned out for the better.  If we had been there and just said: If you do that, we’re going to get involved, or maybe we should be involved so we can tell you what to do.  In other words, since we’re Americans, it doesn’t even matter what the foreign policy question that you’re going to ask me after you read Buchanan’s book — if you read about that particular instance in history, it doesn’t even matter what the question is because we already know the answer.

So the answer to your question is that the framers of the Constitution and the men that lived in the 18th and 19th century were not as arrogant as we, and did not believe they had the answers to those sorts of questions, and thought it was more prudent to stay out of other people’s affairs.  We seem not to be similarly blessed with any modicum or measure of humility whatsoever.  No, we’re only blessed with the hyperbolic.  Of course, we’re Americans.  We went to the moon.  We can do it.

Caller Steve:  I’m not saying…imperialistic view, I’m just saying maybe in the event of human rights and global takeover that the communists had and our failed ideas —

Mike:  Human rights that the communists had?  You mean like exterminating babies in the womb by choice?  You mean those kinds of human rights violations, the ones that go on in abortion clinics here in the United States?

Caller Steve:  It is.  The gulags, the evil the Soviet Union was.  I’m not trying to say we’re — the American exceptional idea, I think, is overplayed.  I would just say from a concept of if we are the beacon of freedom for the world, if we have the capability, in some instances we may have the responsibility to act on behalf of others that can’t act on behalf of themselves.

Mike:  Name the instance where we have a responsibility as a nation using armament.

Caller Steve:  I would think maybe Bosnia, Kosovo, that situation.

Mike:  Then don’t we have a responsibility to act and stop the beheading of villagers in Mexico by drug cartels?

Caller Steve:  I understand your point.  It’s difficult to answer the question.  That’s really why I’m calling in to get your opinion on the matter.  I’m kind of in the middle.  I believe in some areas we need to prevent a situation like World War II, to prevent a third world war, not militarily where we stepped in with the Soviet Union but the failed ideas of detente, and Reagan coming in with his more confrontational method he had with the Soviet Union ultimately led to their demise.  Not necessarily meaning you have to always go in militarily.

Mike:  Steve, please.  Again, sir, your history is totally out of whack.  There was Newt Gingrich standing on the floor of the Congress in 1986 criticizing Reagan because he was a wimp, because he had caved in and he was using too much diplomacy with Gorbachev.  Which is it?

Caller Steve:  I believe there really isn’t too much diplomacy with Gorbachev.

Mike:  What was the end result?

Caller Steve:  The end result of our conflict with the Cold War?

Mike:  What was the end result of Reagan’s diplomacy?  What was the end result of Reagan going to the beach of Normandy on the 10 June 1984 and giving that speech, at the same time he’s calling the Soviet Union an evil empire, telling Gorbachev the United States does not want any war with them, that all we want is peace, with Reagan negotiating and negotiating and negotiating with the Soviets and doing all the things Gingrich and company said he was going to get us all killed for doing?

Caller Steve:  Ultimately the Soviet Union fell and, from what I understand — I’m younger so I haven’t lived through that, I was younger when that happened –Gorbachev ended up conceding to Reagan a lot of the initiatives that Reagan set forth earlier with no restrictions on FBI and other programs.

Mike:  Actually, what happened was in December of 1991, the Soviet republics had had it with Gorbachev and with 70 years of communism and they seceded from the Soviet Union.  That’s what actually happened.  That’s what brought an end —

Caller Steve:  Their economic system was in collapse.

Mike:  That’s what brought an end to communism and communism under the rule of what was known as the Soviet Union.  The fell stroke was not a missile defense shield, although it may have had something to do with it.  The fell stroke was the people in the former Soviet republics saying: That’s it, we’re done.  We’ve had it.  We’re seceding.  We’re out.  That was the end of the Soviet Union.

Caller Steve:  I guess my last question would be, and again I’m in agreement with you about 95 percent.

Mike:  Do not agree with me.  As a matter of fact, you people need to stop sending me letters saying: I agree with almost 100 percent of what you say.  You need to agree with the truth and with the correct historical record.  That’s what I try to stand for and live up to.  That is my measure.  Can I tell you something and then can I back it up with a footnote you can actually trace and see I’m right and it did happen.  You’re not agreeing with me, unless we’re talking about matters of God and transcendency and what we ought to do next.  You’re agreeing with history.  You’re agreeing with the way things actually happened not the way we would like them to have happened, or the way demagogic designing men and women want them to happen so they can sell you books and television shows.  There’s a difference.

Caller Steve:  My last question would be, where is the line between, again going back to the founders, our total sovereignty globally, keeping the United States separate from issues in other countries?  Even the intervention Reagan had, even though it was on a diplomatic level, would that be considered against the founding fathers ideas on sovereignty?  Should we not have even stepped in there?

Mike:  They never stopped talking.  Even after two wars with Great Britain, one in 1776 and one in 1810-1814, we never stopped talking.  There it was on the eve of Monroe’s state of the union address on 3 December 1823, Monroe confiding with Jefferson and Madison and considering whether or not we ought to join and become partners in an alliance with the British.  This is after two wars, men dying, actual bullets flying, cannonade being fired, ships being scuttled, prisoners being taken. 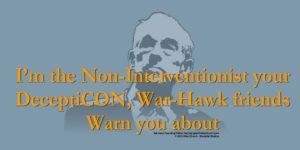 Americans need to remember that this country once profited greatly from other peoples difficulties. We picked up the Louisiana purchase from France by staying out of Napoleon’s wars in Europe. As to Mr. Buchanan’s very well reasoned book on WW2, the whole problem essentially arose from our misguided intervention in WW1. Had we stayed out, the war would most likely have ended in a negotiated peace in 1916. That would have meant no treaty of Versailles, no Adolf Hitler, no partitioning of the Austro-Hungarian Empire into a patchwork of artificial states, no Danzig corridor problem, no German irredentism to recover lost populations and territories, no Balfour declaration giving away Palestine to the Jews, no post-war dismemberment of the Ottoman Empire in Arabia and, most especially, no Communist revolutions in Russia and Europe, all heavily Jewish dominated.

America is still on the false course charted in 1917 with Woodrow Wilson and his “war to end war”. Pat Buchanan, a latter day Charles Lindberg if ever there were one, is still the man pointing America in the right direction. Without Buchanan or Ron Paul to lead us, we are lost.