Mandeville, LA – Exclusive Transcript – We do know that since 9/11 over 3,000 young enlisted men and women have taken their lives as have over 6,500 veterans. The VA reports that since it launched a “suicide hotline” in 2007 it has fielded over 650,000 phone calls and performed over 23,000 “life-saving rescues.” All this has happened while the United States military remains deployed around the globe and the numbers of “terrorists” are increasing.  Check out today’s audio and transcript for the rest…

Mike:  Jim is in New York next on The Mike Church Show, Sirius XM Patriot Channel.  Jim, how are you?

Caller Jim:  Good morning, Mike.  I wanted to cover your issue about the cost of the Iraq War, and first preface it with the fact that I believe all of us soldiers join and go for the right reason, to do good, for the right thing.  These extended occupations that we’ve been doing, I think they increase the chance tremendously that these soldiers have killed or perceive themselves that they have killed the wrong people.  They are forced to live with that moral burden for the rest of their lives.  If we don’t take up that burden as a society and a country, we leave it to them.  I will submit that it is a far greater injury to come home without a soul than without legs.

Mike:  You do know that we’re continuing, unfortunately, to set all kinds of horrific records that no one should want to break for the amount of suicides —

Mike:  I did a piece on my ABC WGNO TV in New Orleans the other day on this.  There are some very sad statistics.  Since 9/11, over 3,700 have committed suicide, that’s currently enlisted.  The number is far greater in veterans.  A lot more vets have taken their own lives than have the enlisted.

Mike:  It’s totally massive.  It’s an absolute mess.  It’s a mess of our own making.  It’s like a 12-step program.  Hi, my name is Dick Cheney and I’m a war instigator.  I think it’s okay to do all these things and I need your help.  The first thing you have to do is admit to this stuff.  There still isn’t admission on this.  How can you change any of this when you have very official and loud protestations that there was no mistake made.

Caller Jim:  I view this through an interesting lens.  I lost my father three years ago to cancer.  As I was caring for him as he left, he was in the occupied force in Japan in 1947 after the war.  He always had a heavy burden from that that he never shared with anybody.  One of the last things he said before he died is that the worst thing that men do is to send young men off to war.  That’s what he left me with.

Mike:  We have too many young people today that are told the opposite.  We have an entire political party whose elder leadership is committed to that idea and think it’s a wonderful idea.  Some of us are fighting to stop that.  Jim, thank you very much for your service and your phone call.  Here are the statistics.  This is from my commentary of 12 March, last Tuesday:

We do know that since 9/11 over 3,000 young enlisted men and women have taken their lives as have over 6,500 veterans. The VA reports that since it launched a “suicide hotline” in 2007 it has fielded over 650,000 phone calls and performed over 23,000 “life-saving rescues.” All this has happened while the United States military remains deployed around the globe and the numbers of “terrorists” are increasing.

Mike:  Those are the sad statistics.  Put those together and that’s over 9,500.  Those are 2010 numbers.  I know this because I just researched this the other day.  It’s over 10,000 now, military suicides.  Why are they killing themselves?  I know some who say, [mocking] “Oh, come on, Mike, it’s just the cost of war.  It’s something we have to absorb.  Grow a set.  Be one of us again.”  PTSD is one of the conditions usually blamed for this.  It could be, just as the last caller just said, that there is no adjusting and there is no way to readjust to this.  Some people just can’t live with what they’ve seen and what they’ve done.  It’s sad and tragic.  We refuse to stop making more, to stop creating more of these young people. 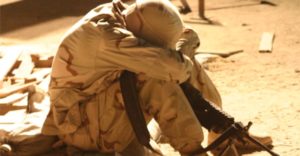