Mandeville, LA – Exclusive Transcript – Here’s a quote from Andrew McCarthy on Democracy and Monarchy, for the rest be sure and check out today’s transcript, “I think the premise that people have to grapple with is: What do you think liberty is and what do you think self-governance is?  If you think it’s the natural condition of mankind, then naturally you would not want to have a monarchy.  If you think it’s an enlightened form of citizenship that you have to learn, I think there are lots of historical examples of this.  There are a lot of good reasons why the framers were not in favor of democracy, which they feared as mob rule.”

Mike:  You can say that some of you, to my suggestion that if you’re going to sit there and tell me that we’re in a perpetual tyranny and there’s nothing we can do about it and we’re not allowed to sever the political bands which have connected us with another, we may as well find us some new divinity and make us some new monarchies.  I see on the Twitter feed, [mocking] “I can’t believe you’ve gone over to the dark side.  Monarchy is the opposite of liberty.”  English liberty was kind of developed under the British monarchy.  As a matter of fact, there is a significant body of scholarship that would suggest that life under a benevolent monarch, there were a few, in the old Christian Europe was probably actually less tyrannical than life under a democracy is today.

I know that may sound radical or out of left field to some of you.  As a matter of fact, I read a piece and we did some of it the other day on the show.  It was a Russian professor that had actually written about this, although he’s an America now.  He wrote about how what I just said is borne out in the historical record.  It’s just a thought exercise.  You don’t have to adopt it, and I don’t expect people will, but if you consider it and apply some resources into disproving it, I think you may be surprised that it may be a little more difficult to disprove than you would have thought.

Let’s go to the Dude Maker Hotline for our dear friend Mr. Andrew C. McCarthy, who is one of the online editors for National Review Online, has his own blog with Pajamas Media, and is a former U.S. attorney and authority on many things when it comes to what’s going on in the Middle East and other quarters.  Andy, always good to hear from you, old friend.  Merry Christmas and welcome aboard, sir.

Andrew McCarthy:  Mike, Merry Christmas.  I’d love to talk about what you were just talking about.  I think it’s completely relevant to what’s happening in Egypt.

Mike:  You mean about the monarchy?

McCarthy:  Yeah.  I think the premise that people have to grapple with is: What do you think liberty is and what do you think self-governance is?  If you think it’s the natural condition of mankind, then naturally you would not want to have a monarchy.  If you think it’s an enlightened form of citizenship that you have to learn, I think there are lots of historical examples of this.  There are a lot of good reasons why the framers were not in favor of democracy, which they feared as mob rule.  Even in the present Egyptian context, what you find, for example if you go through Mubarak’s rule — I’m not here to carry a brief for Mubarak.  In terms of women’s rights and the rights of religious minorities, it was much more along the lines of what we would think of as Western democracy than anything you’ll get out of the elected Muslim Brotherhood.

Mike:  I’ve been reading your blogs and you are far more up to speed on this than I.  American punditocracy was celebrating with great fanfare and ebullience this thing called the Arab Spring.  Just because of what I’ve read, and largely because of what I’ve read that you have written, I never bought it for a second.  I know that you didn’t buy it.  Now it seems the Islamic chickens have come to roost and the uprising in Egypt was not the boon it was promoted to be.  Can you just kind of walk through the timeline and get the listeners up to speed on what’s going on with Mr. Morsi and his crew?

McCarthy:  Mubarak fell in the beginning of 2011.  Right after that, the Egyptian military, what they call the Supreme Council of the Armed Forces, took over as part of a transition government.  The question is always transition to what?  Here the problem is exactly what we’ve begun talking about.  In the West under the guise of this Arab Spring fantasy, what we’ve done is substitute the procedural attainments of democracy, which are not in and of themselves innately democratic, like popular elections and constitution writing, and they’ve substituted it for the real culture of what we call Western democracy.  It’s not worth fighting the word battle of whether it’s really democracy or not.  When we think about Western democracy here, we don’t think about just elections and constitution writing.  We think of a culture of living, which up until probably the last half century or so was a rigorously self-governance, self-determination culture, but one that had fundamental respect for individual liberty, in particular rights like freedom of speech, freedom of conscience, equality of all individuals.

The Muslim Brotherhood realized that politically the people in the West who are big foreign policy geniuses were invested in this idea of a forward march of freedom through the Middle East that would be shown by the fact that they were conducting elections and writing constitutions, even though there was a total void of adoption of any Western ways of life, Western culture, Western liberty culture in particular.  They realized that if they got on board with this idea of having elections in this part of the world, they would win.  That’s precisely what happened in Egypt.  The West didn’t cover this at all.  I cover it at length in Spring Fever, the book I released a couple months ago.  You would think with all the investment we made in this idea of elections as democracy in the Middle East, that the very first free election that they had in the most important Arab country in the world, the most populous Arab Muslim country in the world, you’d think that might have gotten a little attention here.

The problem was, this was an election that was a little bit difficult to explain to people because it wasn’t so straightforward.  It was on amendments to the old Egyptian constitution.  The point of it was the Muslim Brotherhood wanted a quick election.  They knew the faster they could have elections with their powerful organization, they were sure to win.  As a result, they said: We don’t need a new constitution.  We can do five or six little amendments to the one that’s in place now.  We can have elections based on that.  Then we’ll write a new constitution.  They knew if they did that, they’d be elected to the parliament, they’d be elected to the presidency, and they’d get what they really wanted out of this whole equation, which was control over the writing of the constitution.  The secular democrats such as they are in Egypt said: No, we need to write a whole new constitution and put off free elections until we have that in place.  That not only was sensible, it was politically smart for them because they need time to grow, probably a lot of time, to grow any kind of institutions that can compete with the brotherhood.

The election was conducted in very sectarian terms.  The Muslim Brotherhood said if you were against the resolution to have these amendments, you were an enemy of Islam.  That’s exactly how they conducted the elections.  The reason it didn’t get covered here is the Islamists beat the secular democrats 78 to 22 percent.  People like me, the Islamophobes, came in and said: I don’t know what you all expected because for years we’ve been seeing this polling which showed us that upwards of two-thirds of Egyptians wanted to live under Sharia Law.  When they got the opportunity to vote, naturally, especially given the fact that the Brotherhood has such a strong organization, they were going to win and they did.  They won by a margin of 4:1.  As a result, they then had the parliamentary election.  They won that by a margin of 4:1 also.

The only interesting thing about the parliamentary elections was that a group that they call the Salafists, who are Muslim extremists, Islamic supremacists who are even more rabid for Sharia change on a quick basis than the Brotherhood, won 25 percent of the votes.  They even outnumbered the vote of the secular democrats.  So the Brotherhood won 50 percent, the Salafists added on another 25, and then you had the rest who are decided minorities.  This is why Morsi was able to win the presidential election as well, and why they were able to get a hammerlock on the constitution.  What they’ve now done with this hammerlock they have, they formed this thing called the Constituent Assembly.  As usual, the Brotherhood said all the right things about how they knew the constitution needed to be a consensus document of all society not representative of any one strain of thought.  Of course, when the rubber met the road, they wrote an Islamist constitution, which basically would strangle Egypt in Sharia.  That’s what the current controversy there is all about. 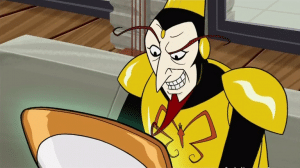 Venture Brothers, Monarch. I get it.