Mandeville, LA – Exclusive Transcript – That has no political implication whatsoever unless you people make it.  It won’t even be political, it won’t be cultural.  All it will be is just rabid complaining.  It will not amount to anything.  It probably isn’t going to change the IRS.  It’s not going to change anyone’s opinion of the IRS.  It may change people’s opinion of Martin Bashir.  Who in the hell is Martin Bashir?  Martin Bashir is a third-rate host on a third-rate network that’s third in the network ratings.  In other words, this is just a distraction.  Check out today’s transcript for the rest…

An event happened yesterday.  Martin Bashir, who is a third-rate host on a third-rate network, that’s MSNBC, attempted his own version of what I will call a Touré.  AG, do you remember back in probably June or so last year, August when this young man Touré — what is that show that S.E. Cupp is on?

Mike:  Yes, The Cycle.  Okay, so this Touré guy is on The Cycle.  In order to jumpstart the predictable kneejerk, useless reactions of “conservatives,” Touré throws this bomb out there that Mitt Romney, the GOP nominee at the time, had begun the N-ization of the campaign.  Figure it out for yourselves.  Of course, [mocking] “I’ve never heard anything so outrageous.  You’re trying to turn everything into racism.”  This got your usual suspect conservative all up in arms.  They were blogging, screaming, YouTubing, on television, on radio.  [mocking] “This will be the thing that turns this campaign, these idiots, these libs.  They just keep doing these things.  This double standard and this hypocrisy, this is going to bring Obama down.  This is why liberals suck.”

Mike Church Show Transcript: Thanks Media: God Gets The Bronze And The “Exceptional Nation” Gets The Gold

Absolutely nothing became of this.  The budget wasn’t balanced.  The troops weren’t brought home from Afghanistan.  Guantanamo Bay is still open.  No one that was looking for a job was employed.  Student loans were still being handed out willy-nilly.  It didn’t change a damn thing.  All it did was hog up a bunch of airtime and make a bunch of people think, [mocking] “I’m Luke Skywalker today.  I struck back against the evil empire.”  No, you didn’t, you fell for it.  You feel for it, sucker.  So yesterday, Martin Bashir tries to re-Touré a Touré.  Do we have the clip?

Martin Bashir: It’s time now to clear the air. Do you remember this? (audio of Mitt Romney – “I love being home in this place where Ann and I were raised, where both of us were born. Ann was born at Henry Ford Hospital. I was born at Harper Hospital. No one has ever asked to see my birth certificate. They know this is the place.”) Yes, that was the moment which proved that the rhetoric of racist insults and slanderous attacks on the president had moved from the lunatic fringe to the very center of presidential politics.

Of course, the journey didn’t take very long. We’d already had a ludicrous library of books about the president with a range of deceitful and disgraceful titles including Gangster Government, The Great Destroyer, Whiny Little Bitch: The Excuse-Filled Presidency of Barack Obama, and that other ridiculous work of fiction entitled The Roots of Obama’s Rage written by the one-time president of a Christian college, Dinesh D’Souza, who was subsequently caught in a hotel with a young woman who was not his wife. All of these books played an important role in preparing the groundwork that eventually allowed a presidential candidate to make a racist comment, in front of the cameras, without any fear of contradiction. Now the IRS is being used in exactly the same way as they tried to use the president’s birth certificate.

You see, for Republicans like Darrell Issa, who knows something about arson, the IRS now stands for something inflammatory. Those three letters are now on fire with political corruption and malfeasance, burning hot just like that suspicious fire that engulfed Mr. Issa’s warehouse back in 1982. And, despite the complete lack of any evidence linking the president to the targeting of Tea Party groups, Republicans are using it as their latest weapon in the war against the black man in the White House.

[montage of clips] Rand Paul – “Someone needs to be prosecuted.”

Michele Bachmann – “Thank you, Senator. That goes all the way to the White House.”

Paul Ryan – “This is arrogance. This is big-government cronyism.”

David Gregory – “Do you have any evidence that the President of the United States directed what you call a ‘culture of intimidation at the IRS’ to target political opponents?”

Mitch McConnell – “I don’t think we know what the facts are.”

David Gregory – “But that hasn’t stopped you from accusing.”

Michele Bachmann – “There isn’t a weekend that hasn’t gone by that someone says to me, ‘Why aren’t you impeaching the president?’”

Founders TV: The “Evil Liberal Media” Does Not Control You

Martin Bashir: This strategy is nothing new. It was explained way back in 1981 by Lee Atwater, who was Bush 41’s chief strategist. In a tape recording, Mr. Atwater revealed how Republicans evolve their language to achieve the same purpose. He said, “You start out in 1954 by saying N-word, N-word, N-word. By 1968 you can’t say N-word – that hurts you, backfires. So you say stuff like ‘forced busing,’ ‘states rights,’ and all that stuff and you’re getting so abstract. Now you’re talking about cutting taxes… ‘We want to cut this’ is much more abstract than even the busing thing and a hell of a lot more abstract than N-word, N-word.” This afternoon, we welcome the latest phrase in the lexicon of Republican attacks on this president, the IRS, three letters that sound so innocent, but we know what you mean. Thanks so much for watching.

Mike:  For crying out loud!  Am I going to get the three minutes of my life back that I just suffered through?  I just have to ask, beyond getting certain individuals’ blood pressure up, and the dig at Issa and the suspicious warehouse fire, you better watch it, Martin.  We have laws in this country against this thing called libel.  Keep an eye on that there, bud.  Beyond some blood pressures being raised and what have you, what does that matter?

I was positively amazed.  I went to the Twitter feed last night because Andrew asked me to tweet out about Glenn Beck and Mike Slater’s event next Tuesday so I did.  I saw Martin Bashir in the trending.  About an hour later, I went back and it was still trending.  Actually, I had seen it there earlier in the day and said: What in the hell did this clown do to be trending on Twitter?  I clicked it.  As a matter of fact, you can click it yourself.  It’s in today’s Pile of Prep.  It will take you to Twitter.com/MartinBashir.  I started reading and boy, they were coming across fast and furious.  Every two and a half nanoseconds I was being updated by some twittering “conservative” who was outraged.  [mocking] “I’m absolutely outraged.  This is the last straw.  We’re not going to let these clowns at MSNBC get away with this anymore.  We’re not going to allow this double standard and hypocrisy here, blah, blah blah.”  That’s what it started to sound like: Blah, blah, blah.

Why do conservatives let themselves be tricked and drawn in so easily?  It is obviously, if you didn’t get it from listening to the piece, that’s obviously Bashir’s goal.  I’d say mission accomplished.  I guarantee you whoever the news director is at MSNBC is doing cartwheels this morning going: I can’t believe those idiots fell for that.  And fall for it they did.  So the IRS is the new N-word.  Well, trot that out and see how far down the quarter-mile track it runs.  See if it has any legs to it.  See if it changes anyone’s opinion.  I doubt very seriously whether that will be the end result.  I guarantee you this, all the time that you spent obsessing over Martin Bashir and the use of the new N-word, the IRS, and how outrageous it was was one less moment you spent trying to get involved in your local republican issues, reading some good history, maybe doing a little meditating or prayer.  All Bashir did was suck the wind out of people’s sails and redirect it into a totally non-productive endeavor.  Mission accomplished. 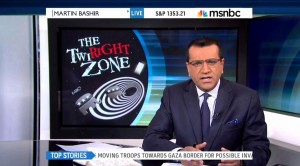