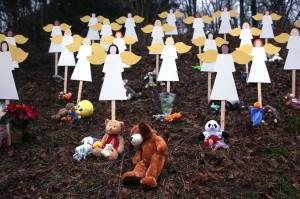 NEWTOWN, CT – DECEMBER 16: Twenty seven wooden stand in a yard down the street from the Sandy Hook School December 16, 2012 in Newtown, Connecticut. Twenty-six people were shot dead, including twenty children, after a gunman identified as Adam Lanza opened fire at Sandy Hook Elementary School. Lanza also reportedly had committed suicide at the scene. A 28th person, believed to be Nancy Lanza, found dead in a house in town, was also believed to have been shot by Adam Lanza. (Photo by Spencer Platt/Getty Images)