Mandeville, LA – Exclusive Transcript – If you’re looking for answers, look heavenward.  Look to the good book, look to the old book, look to the blessed mother, look to whatever deity or god it is to whom you pray.  There you will find more comfort, more peace, and more solutions on how to fix things in your life.  Maybe if we just got back to the practice of fixing our own rotten lives, or the things that are rotten in our lives, maybe we wouldn’t always be congregating together, demanding that some earthly force called a government, a bureau, an agency do it for us.  You want optimism?  You want hope?  Hope lies above. Check out the rest in today’s transcript…

The word policy was heard so many times last night, you might have thought that we were the United Policy States of America.  Yet at the end of that thing called a debate last night — which I properly have termed a 90-minute infomercial for two warring parties over who gets to carve up the $3.8 trillion in federal spending — what was learned?  What was gleaned?  How much smarter is the body politic today?  How much more well-educated on the enormous, gargantuan, stupendous problems that face 309 million people organized under a thing called the Constitution of the United States that did not make an appearance last night?  How much smarter are people today?  How much more enlightened are they?  How much more dedicated are they to looking in the mirror and fixing this problem for the sake of their children?

How many people that watched that debate last night are so animated and inspired that they woke up this morning with a new outlook on life and are ready to take on the challenge of the 222-trillion-headed monster?  They’re ready to take on the challenge that if they have to do it personally, they will fund their own expedition forces to go to Afghanistan, to go to Yemen, to go to northern Africa, to go to Spain, to go to Italy, to go to Germany, to go to Japan, to go to South Korea, to go to Guam and personally retrieve their loved ones who are currently deployed in the military, damn the consequences that a courts martial may have to say about it?  How many people are ready to go to that mailbox today and get that Pell Grant check in the mail and rip that joker up?  Let’s have a Pell Grant check burning party.  How many people are willing to not accept an unemployment benefit today?

Last night, however many millions watched the 90-minute infomercial and got exactly what they deserved.  They got a bunch of misdirection.  They got a bunch of gibberish.  They got a bunch of empty, false promises, most of which will never come true.  Here’s the worst part: if promises are actually acted upon and they do come true, then body politic as it is currently constituted will find itself financially and morally worse off than it is today.  If more of those kids take advantage of those student loans that both candidates were droning on about, if more kids take advantage of those grants that they were both droning on about, if more illegals decided to come here because we have free goodies to give away and because we refuse to pick our own damn asparagus in Washington State because it doesn’t pay as well as an unemployment check, if these things come true, then we’ll be worse off than we are today.

As a matter of fact, it is almost a foregone conclusion that, politically speaking, tomorrow will be a worse day than today is.  Why is that?  Why is the great ship of state inexorably steaming toward the proverbial cliff?  I don’t say it’s steaming towards the cliff any longer.  We’ve passed that metaphor.  We are out on an ocean red, debt-laden ink.  We have taken on about 80 percent of what our ballast can hold.  We just have enough left to keep our noses under water, to figure out, of the 20 percent that’s left, how we can break up the party, divide the power, and then get back to being self-governing people.

A self-governing people do not watch what was on display on that television screen last night and walk away with any other attitude other than rejection, other than revulsion, other than repulsion.  A self-governing people would see that for what it was: an exercise in futility, an exercise in vanity, two men believing that they are far smarter than anyone that they profess to want to so kindly and benevolently govern.  Yes, they want to govern us so desperately because they are so much wiser than we.  We must be led.  We must have pinkies inserted into our nostrils and pulled across the floor in the right direction, to stand on the right spot by our benevolent, kind, beneficent leaders.  If they do not do this, we certainly shall perish from the face of this Earth.  Freedom?  Ha!  Liberty?  What’s that?  Constitution?  Never heard of it.  Self-government?  What?

This sorry state of affairs has been brought about by a sorry state of citizens.  Ladies and gentlemen, do you want an answer?  [mocking] “Mike, there’s got to be some hope.  Please give me some hope.”  Here’s the hope: the great hope of all mankind, I say the great hope of all the people of these United States, is not to be found in our system of government.  This is why you’re complaining today, because of that system of government and what it has wrought.  The great hope, if there is one, is to be found by looking heavenward.  We’re not allowed to look heavenward because we may aspire to a higher ideal, we may aspire to a life lived less extravagantly, we may aspire to not judge every solitary, living action that we commit by its economic or financial impact.

Were we to do those things, were we to get back to the practice of caring for one another again, were we to look at that house that burned down down the street from where you live as a project that is something you need to tackle along with your neighbors as opposed to something you need to call your member of Congress or the state legislature to take care of, were we to do some of those things, were we to actually go through the practice of caring for the poor and the sick, were we to actually go through the practice of caring for the elderly, and I don’t mean shipping them off to Shady Acres so that they can die with a checkerboard on their lap but actually caring for the elderly like we once did almost to a man or to a woman.  Grandparents didn’t move out and go to retirement homes.  Grandparents died in the homes where their children lived, or they died in the homes they had built attended by their children.  Not today, though.  We can’t be inconvenienced by that.  That might get in the way of us watching the next episode of what’s real.

If you’re looking for an answer and a solution today, then you’re not going to find it in any person that you call a politician, and that includes Congressman Ron Paul, Governor Gary Johnson or anyone.  It could not have been found and it was not found in the personae of Ronald Wilson Reagan.  If it were, then we wouldn’t be dealing with the circumstances that we are today.  Was Reagan a good man?  I believe that he was.  Was he able to do that with which a people needed to do with him?  No, because the people did not do it with him.  Instead, the political elite class lied, as they always do, they connived, and they cheated.  They convinced Ronald Reagan that were he to get his way financially speaking in the House of Representatives, then he would have to fall on the sword of debt and deficit.  The debt and deficit is not just a financial problem, it is a moral problem.  It is a moral problem, a moral dilemma, that is not solved by saying, “We’ll deal with that tomorrow.  Today, we have to have this spending.”  Who is we?  We have to have this spending to do what, to accomplish what that we can’t accomplish ourselves?  Is everything related to spending, all of it?  Really?  Seriously?

If you’re looking for answers, look heavenward.  Look to the good book, look to the old book, look to the blessed mother, look to whatever deity or god it is to whom you pray.  There you will find more comfort, more peace, and more solutions on how to fix things in your life.  Maybe if we just got back to the practice of fixing our own rotten lives, or the things that are rotten in our lives, maybe we wouldn’t always be congregating together, demanding that some earthly force called a government, a bureau, an agency do it for us.  You want optimism?  You want hope?  Hope lies above. 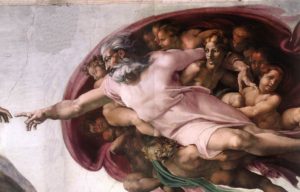 Your words have made more sense to me than anything I have heard or read in a very long time. Watching the debates left me with a feeling of disgust, dissapointment, and hopelessness. You have reminded me to trust in the Lord, and never to put all my faith in man. So, from now on I am going to stop worrying, and just pray and prepare. Thanks for all you do.