Mandeville, LA – Exclusive Transcript – “Dr. Greg Brannon is on the Dude Maker Hotline with us on a bright and beautiful Tuesday morning.  Doc, how are you?”  Check out today’s transcript for the rest….

Mike:  Dr. Greg Brannon is on the Dude Maker Hotline with us on a bright and beautiful Tuesday morning.  Doc, how are you?

Mike:  You have a little bit of experience in the process of human life and its development in its mother.  Why now?

Dr. Brannon:  I’ve always spoken about life way before I got into running for the United States Senate.  I’ve been on the board of a couple pregnancy support groups.  I think being raised by a single mom and just being involved how God opened the doors for us.  You articulated it very correctly.  I’ve been listening to you for years.  Mike, with no life, you cannot have liberty.  It’s so important.  So why now?  I just wanted to put it in a place where I had seven or eight pages down so there’s nothing ever to have to guess what Greg thinks.  Believe it or not, during the campaign, I was actually called an abortionist by some people in the campaign.  That’s how evil and wicked this political system can be.

Mike:  Who in their right mind would call you of all people an abortionist?

Dr. Brannon:  The idea was to get the progressive elected.  I’m not talking about anybody who ran.  I was talking to people out and around in the campaign itself.  The thing about it, Mike, is this.  We’re in a society where one out of four babies are not born because of abortion, a society where Margaret Sanger’s dream of wiping out the “inferior” is actually occurring when over 61 percent of all abortions in America are in the African-American community.  When you look at the history of eugenics, when you look at Justice Holmes and his idea that the state must be protected by the 14th Amendment, when you look at all the things together, it was just time to put it down.

To me, the reason I even ran for Senate was what I put in the very first paragraph, Romans 12:9.  We must hate evil and cling to good.  The first two words are the most important, “genuine love.”  I want to go to those who believe in abortion as a person of kindness who wants to go talk to them.  You’re told all these years you evolve from nothing, you go to nothing, you come from nothing, there’s no creator.  When you hear that, why would you not believe in those situations that abortion is okay?  The question is we have allowed the progressives, the statists, the atheists to really love Darwin – if people read Darwin’s book, the whole idea of the super society – in his book he talks about one day the elite people actually have to get rid of the inferior people.  That book is disgusting.  People don’t go back to history.  They don’t know, understand, and respect the love of history, which will help us in today’s society and for tomorrow. 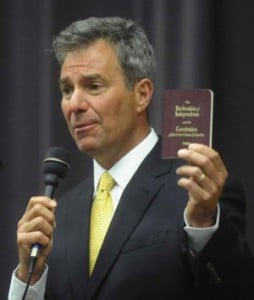 Mike:  We need a lot more than just denunciations of Darwin.  You can actually look to Darwin to denunciate Darwin.  As Darwin got old, he went: Wait a minute, I might have made some mistakes here.  Of course, some just view early Darwin work as infallible.  It’s amazing that Charles Darwin is infallible, but the Holy See of John Paul II or Francis or any of the others, they can’t be infallible but the evolutionist is.

Dr. Brannon:  Also, our DNA of our fingerprint occurs the moment that miracle of conception occurs.  There’s your DNA.  There’s the potential for your life.  Then you look at neural tube activity at day 19, heart activity at 18, circulatory system at day 21.  I’m at work and people are coming to look at their baby not their product of conception.  I see the heartbeat as small as 0.23 cm.  It’s insane that we cannot let the science show that this is a human being. The thing about it is this.  I love using Peter Singer, the pro-abortionist.  He says: Who cares about this life if it’s not beneficial to society?  He’s taken Plato’s view to the ultimate technocratic view.

The thing about this, Mike, is that we must err on the side of life.  This idea that the Republican Party is the standard and we should protect life is a joke.  Roe v. Wade was a 7-2 vote, and of the seven people, five were Republicans, period.  The National Right to Life group supported candidates that believe that abortion is okay other than the mother’s life, but in their big money raiser, they don’t say that.  It’s hypocrisy.  It’s politics.  We must stand for life because without life there is no liberty.  I don’t want to say there’s a political answer because God is in charge, but politics gave us abortion.

There is a way to stop it, the Tenth Amendment, Article VI, Clause 2, and the Ninth Amendment.  It’s very simple.  Where in Article I, Section 8 gives the right to the Supreme Court to make law or have a federal function?  It’s not there.  This is where every state legislator must stand up and say no.  It’s simple.  We could do this exactly as we did with slavery.  We could have a Sanctity of Life Bill where Congressman Paul, Congressman Stockman, and Congressman Broun for the last 20 years and said life begins at conception, and then have an amendment process.  This could be done at the state level.  This is so simple.  The question is, we have these people who want to use abortion as a carrot to say: Vote for me and I’ll do something about it.  They do nothing every single day.

Mike:  There’s another way to do this as well, sans amendment, which is probably unlikely in the short run but maybe possible in the long run if the Constitution system lasts, or what’s left of it lasts that long.

Mike:  Even beyond nullification.  Congress could actually do its job.  Congress has veto power over Article III judiciary.  They have control.  It’s the first clause in.  There doesn’t have to be an Article III judiciary.  You have to have the Supreme Court and one inferior tribunal.  That to me means you have to have a total of five justices.  That’s all that is required to execute the Article III judicial power.  Most people don’t know that.  Congress could just say: We are ordering you.  If you are a federal judge, you are forbidden from hearing any challenge to any state law that challenges a duly-passed, authorized act of any state that restricts, restrains, or has to do with abortion.  You can’t hear it.

Dr. Brannon:  I put that in the article, Article III.  We don’t understand that that’s the function that could do this.  Congressman Paul actually talked about the whole idea.  Article III is the answer.  That’s why there are so many different avenues “constitutionally” that could be done.  The question to ask is: Why?  You and I aren’t the only ones that know this.  It’s been written, articulated.  We know it.  The question must be because it actually enslaves certain people to vote a certain way for power.  That infuriates me that they use little babies as pawns.  That is why I wrote this.  That’s unacceptable.

The true pro-life movement is pro-life not just in the womb.  It’s the disabled, the elderly.  Obamacare does have a 15-member panel that will ration care.  Interesting, too, I actually reference in the article that February 29, 2012, in the Journal of Bioethics of Australia said: We know abortion is okay in the womb.  Why stop there?  Let’s have post-birth abortions.  People may say that’s insane.  That is a perfect conclusion of this thought process they’re doing.  It’s completely not looking at the whole idea of what life is.  Life to them is if a person is beneficial to society.  Again, that’s Plato’s view.  That’s not God’s view, period.