Mike:  Lou is in Maine, first up today on The Mike Church Show.  Hello, Lou.

Caller Lou:  Hello, my fellow [r]epublican.  I was listening to everything you said this morning.  Do you remember the old Dean Martin roasts from back in the day?

Caller Lou:  There was either Red Buttons or Red Skelton.  Whenever he said “didn’t have a vote,” I just said I’m not listening to this guy.  I’m going to make fun of him and just have dinner.  It was just propaganda, total propaganda.  To me, this guy is a reptile.  He’s a serial liar.  He’s basically destroying the nation.  I would say in two, three years, it’s going bankrupt and he’s going to disarm everybody.  Everybody is clapping to this self-appointed king’s excess.  I can’t believe what’s going on here.

Caller Lou:  I can’t believe there can’t be somebody in Congress that would just call him out and challenge him, because it’s so easy to do, but nobody wants to.  Even Rand Paul, he’s a different Rand Paul from two years ago.  It looks like he’s bought out, too.  He’s not like the son of his father who used to back up a libertarian type of candidate, and might I say a Christian libertarian, I’d like to make that distinction, as much as I think you are to some degree.  What’s going on here?  Are the American populace that dumb to keep voting for this man?  I don’t understand.  He’s using too much power for himself.  He’s supposed to defend the Constitution, not defend his ideals.  That’s all I wanted to say today.

Folks, we’re all missing the point.  We’re staring at a tree, at the bark on one tree.  To the left or right of the tree and for as many miles back as you care to see, there is a forest there.  The forest is the national legislature and the people that have given into it and actually think, quite frankly, ladies and gentlemen, that’s a pretty good idea, that we ought to all bow down and get all of our marching orders and all our legal and political questions answered by Washington, DC.  It’s one-size-fits-all. If it works in Maryland, if it works in California, it ought to work everywhere else.  There’s no need for individualism .  There’s no need for this thing called federalism.  We don’t need any of that old, fuddy-duddy stuff.

What do you need a union for?  People send people to Congress to act on their behalf.  If they choose to not act on their behalf because they believe it to not be a prudent exercise, and if the man in the central office says that’s not good enough, I’m going to act because you didn’t, and I dare you to try and stop me, then we are truly at an end, are we not, my friends?  We are truly at an end.  We have now reached the stage where elected presidents are assuming powers that were previously reserved for those who received their powers from God, through the divine right of a king or the divine right of a queen.  Do we really have a union?  Was the state of the union last night that there is no longer any union, that we are one large, conglomerated, national mobocracy from Maine all the way down to — what is that border town, south of San Diego?  Baja.

Mike:  No, I’m talking about in California.  Maine to Baja, all the way from the northern climes of Washington State all the way down to Key West Florida, there’s nothing in between.  There are no borders, towns, cities, government, authority.  It’s only his authority. 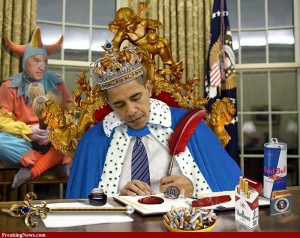