Mandeville, LA – Exclusive Transcript – Still, what Obama is doing today, I’m sorry, folks, it does not rise to the level of what President Wilson did.  President Wilson, in 1917, two acts were passed, the Espionage Act and the Sedition Act.  There were tens of thousands of American citizens that refused to surrender, as you people like to call them today, many of you, constitutional rights to not be conscripted.  There is no constitutional right to conscript anyone into the draft.  It is illegal and unconstitutional.  Check out today’s transcript for the rest…

Mike:  Last Thursday I was asked via a Twitter post whether or not I was actually, what’s the word, how I could ask people to unplug the matrix cable from the back of their head if I was part of the matrix?  [mocking] “You are on the internet, aren’t you?  You are boasting and bragging about your stupid on-demand service all the time, aren’t you, you right-winger or whatever it is you are?  Aren’t you then part of the matrix?”  I didn’t know how to respond.  I was fumbling about for an answer.  I surrendered the endeavor.  I resigned myself that I don’t know.  Am I part of the matrix?  When I do that promo, is it metaphorical?  I think it is metaphorical.  I don’t know why it is that that has come up.  I got that one and then there were two more.

On Friday, you may have seen, if you go to my website, a piece of hate mail I received from I guess a former listener who was unbelievably beside himself, hopping mad beside himself, hurling epithets my way.  There was a phone call on the last segment of this show Friday.  It was a young man who said he was worried about his daughter having to suffer under Obamacare.  I did not pooh-pooh the idea that she was not going to suffer under Obamacare.  All I did was try to put it in perspective, that your parents have suffered under Social Security and your parents have suffered under every other federal tyranny, and your grandparents have suffered under Medicare.  Those not as fortunate as you that are fellow citizens are suffering and toiling mightily under Medicaid.  I was trying to put it in perspective.  I wasn’t telling the young guy to shut up or anything of the sort.

There was another part of the call where the young man said something about the acts of this administration being as tyrannical as anyone has ever seen before.  Even with this government shutdown business and closing all these federal parks and all these things that Obama and Reid and company are doing for spite — Obama really has no authority here.  He’s daring Boehner to do things, but he actually doesn’t have any authority to do anything.  He can only execute the laws.  Constitutionally speaking, he doesn’t have any authority.  I was telling my wife this as she was saying: You could be a little more hard on Barack.  I called the man dear leader Chairman Maobama, for God’s sake!  How much harder can I be?  I’ve asked for him to be impeached six times.

Still, what Obama is doing today, I’m sorry, folks, it does not rise to the level of what President Wilson did.  President Wilson, in 1917, two acts were passed, the Espionage Act and the Sedition Act.  There were tens of thousands of American citizens that refused to surrender, as you people like to call them today, many of you, constitutional rights to not be conscripted.  There is no constitutional right to conscript anyone into the draft.  It is illegal and unconstitutional.  It was unconstitutional when Madison contemplated doing it in 1814.  It was unconstitutional when Lincoln did it in 1861.  It was unconstitutional again when Wilson reinstituted the draft in 1917.  This is why so many young men of that day said: No, you can’t make us go.  We’re not going.  The Sedition Act dealt with that.  Did you know there were tens of thousands of people that were imprisoned?  They were thrown in jail, not threatened with jail, actually thrown into jail.  Shutting a federal park down or imposing a healthcare law that purports a tax mandate on you of $1,000 a year does not rise to the level of being thrown into a federal prison and denied your actual constitutional right to not be conscripted.

We could go even further than that.  In the early 1930s, there were some surviving members of that war that were demanding back pay and pay for medical services for injuries they had suffered during their deployment in World War I.  They decided they were going to have, I can’t recall all the details of this, but they were going to have a protest in and around the capital.  There was an altercation and these men were fired upon.  These are veterans.  They were fired upon and killed right there in DC.  Does that exceed the level of vets being denied access to a park?  I think it does.

My only point was, in my own defense and for the defense of my sanity so I can continue this program today and hereafter, is that I was just trying to alert the young man and get him up to speed.  Yes, the things the Obama administration are doing are, in my opinion, tyrannical, but they are not the most tyrannical things that have ever been visited on the heads of the American people.  That was my only point.  I wasn’t trying to excuse Obama.  I wasn’t trying to help him out.  I wasn’t trying to make sure the progressives win yet another one.  That was not the point at all.  Apparently I failed, at least in one individual case, in my explanation.  I thought I would offer a follow-up on that.  You just heard it. 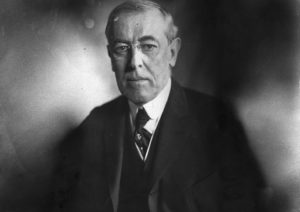