Mandeville, LA – Exclusive Transcript – In Human Action, you learn one of the principles of the Austrian economists is you can’t predict what people are going to do.  A scheme like the Affordable Care Act is what you should call a planned market.  It is a centrally-planned market.  Centrally-planned markets don’t work.  They do not deliver what it is they are created to deliver.  They don’t deliver it because they can’t.  It is impossible to predict human action, thus the title.  Check out today’s transcript for the rest…

Mike:  David in Texas is next.  Hello, David.

Caller David:  Hello.  How you doing this morning?

Caller David:  It’s great to have a laugh.  I was actually on Penn and Teller’s BS show.  They were actually very kind to the people they were trying to lambast when I was there.  It’s an interesting show.  Anyhow, the reason I called was I’ve been thinking about the application of fraud.  I’m unclear if fraud rises to the level of a ratified, codified law.  Didn’t Obama and all the Democrats and everybody, we have videotape and audio tape of them promising that the Affordable Care Act was about care and about being affordable, lowering insurance, improving access, all the things that it’s apparently not now that we’re into the fourth day of its implementation.  I read a report which is really funny and really applies to getting everyone care.  They said on Louisiana on the very first day, they had X-number of 100,000 hits and no one signed up.  I applauded for Louisiana several times.

Mike:  That doesn’t mean they didn’t try.  We don’t have an exchange.  You’d have to go to the federal exchange because Governor Jindal has, wisely, I think, refused to implement a state-run exchange.  People may say [mocking] “Your little state is going to come along sooner or later.  People forget, what did Bobby Jindal do in the private sector before he got into politics?  He was one of the youngest COOs in the entire world.  He was a wunderkind.  He was the COO of Humana.  Humana runs hospitals across the country.  The man worked in the hospital business.  In other words, he knows a little bit about the business.

I don’t want to say he is the world’s foremost authority or anything, but he actually worked in that industry, and he had to manage the affairs of a very large medical concern.  No, that’s not my endorsement of Humana, because I don’t know anything about it.  All I know is that’s what’s on his résumé.  The governor is probably doing us a favor by saying no, even though many Louisianans are angry about it.  [mocking] “We want our share of free federal stuff.”  As I keep saying: You can get your free federal stuff if you’ll just declare Louisiana a sovereign state and say that the laws of the Union are null and void here.  Bammo, anything the state legislature passes is federal stuff.  It’s yours, enjoy it.

Caller David:  To that point, the law actually says that if you do not open an exchange in the state, the HHS secretary, our lovely Donna whatever her name is.

Mike:  No, Kathleen Sebelius, and she’s not lovely.

Caller David:  That’s right.  I was trying to be in line with your —

Mike:  Lovely in an Ursula from the Little Mermaid kind of way, yes.

Caller David:  There you go.  It says she can run an exchange inside a state from another state.  A lot of people don’t know that, but it’s in there.  The point of my call was, does fraud rise to the level where since they knowingly claimed, because the OMD said this law was not all they were saying it was, does that mean this is fraud and can be defeated on the basis of fraud now that people have actually been introduced to the fraudulent manner of the bill?  They keep moving the line backwards according to who they want to move it backwards for.  Is that fraud or is that not fraud?

Mike:  I’m not an attorney, sir.  I only play one on the radio, so I can’t answer that question.  I can tell you this, that there has not been a more acrimonious implementation of a federal edict since the Social Security Act went into effect.  That wasn’t even as acrimonious as this, because at least in the Social Security Act they pretended for the first three decades like it was voluntary.  It even said in the act it was voluntary.  Federal income contribution, when you contribute something, that implies voluntary.  FICA, Federal Income Contribution Act, the moniker it operated under, it was not nearly as acrimonious and as debated as the Affordable Care Act, which is not voluntary.  It is compulsory, but, of course, it’s unconstitutional and illegal.  I don’t care what the Roberts court said.  The Roberts court erred.  In any event, it seems to me, it purports to cover and touch the lives of every 311 million citizens, and unless it has an amazing amount of popular support, we’re talking two-thirds or more, then a wise legislature would scuttle it.  They would scuttle it because there is no support for it.

Mike Church Show Transcript – It’s Up To Congress Whether The U.S. Defaults

The premise of having a written constitution and of having a federal system of laws is so that the laws of the states that are members to the compact can be preserved except in the rare instances where a power has been enumerated or granted.  Heretofore, there has never been a power that has ever been granted to compel people to purchase something, especially something as intimate as medical care.  Regardless of what the Roberts court said, it ought to just be an easy jump from point A to point B.  Since you don’t have amendatory majorities in favor of this, it cannot then become part of the fabric of the Constitution, it just can’t.  What I mean by amendatory majorities, let’s just pretend for a moment that the Affordable Care Act could be boiled down into two or three, maybe four paragraphs, and then submitted as Amendment 29.  Would three-quarters of the states ratify it?  Not only no but hell no.  There is no way it could become part of the Constitution.  So then why is it being treated “This is the law of the land” as Democrats keep screaming?  No, it’s not.  You have a majority of state legislatures in ballot initiatives that say no.  Not only do you not have a three-quarter majority, you have a simple bare majority that’s opposed to it.

One of the best books you can get, if you want to read up on Austrian economics — and Austrian economics has a lot to say about the Affordable Care Act — is Ludwig von Mises’ Human Action.  If you can slog through it, because Mises is an incredibly boring writer.  I think he’s a boring writer.  That doesn’t make him wrong, all you Miseans out there, it’s just my personal point of view.  I find him very difficult to read large swathes of pages at a time.  It is informative, and I do read it, and I suggest you do as well.  In Human Action, you learn one of the principles of the Austrian economists is you can’t predict what people are going to do.  A scheme like the Affordable Care Act is what you should call a planned market.  It is a centrally-planned market.  Centrally-planned markets don’t work.  They do not deliver what it is they are created to deliver.  They don’t deliver it because they can’t.  It is impossible to predict human action, thus the title.

A market, though, because it can react to human action, it is bound by no authority other than what consumers in the marketplace desire at any given point in time, that is what drives a market and what makes it superior to anything that is centrally planned.  The central planner has to say: I think this is going to happen and we’re going to prepare for this to happen for the next year.  What happens when that doesn’t happen?  What happens when the first thing doesn’t happen?  The central planner has banked on the first statement being correct.  If the first statement is incorrect, then shouldn’t the rest of his plan go out the window?

Let me give you a quick example.  If the first statement was we’re going to open exchanges on October 1 and websites will launch, everyone who wants to sign up will be able to sign up that day and be covered.  Well, we know that that’s not true.  The central planners have already been incorrect.  The central planning is already off the tracks.  This then cascades into the next part.  What did the central planners say would happen after you signed up?  Well, a lot of people didn’t sign up.  They had to go do X.  You just continue to rinse and repeat.  That is the folly in this.  Only a conceited, arrogant fool with an ego and superiority complex to go along with it would believe that something as momentous and large as the Affordable Care Act could actually work.  That doesn’t mean that Democrats and progressives, or whatever you choose to call them, that they’re not convinced of their own superiority and that they’re not convinced that this will work.  Please do not misunderstand.  In the real world, though, we know it’s not going to.  It can’t work.  It can’t function as it was advertised because it cannot take human action into account.  That’s the requiem on the Affordable Care Act.

You can apply this to Social Security.  It didn’t work as they said.  You can apply this to Medicare.  Medicare was said to cost $11 billion by 1990.  By 1990, it had cost $110 billion per year.  They were only off by a factor of ten or eleven.  That’s because they could not plan for human action.  The worst part about it is, once you remove the market force that drives the free market, which is the price mechanism.  Price mechanism is the most powerful force in human economic or financial activity on earth, ever devised or ever allowed to blossom.  It controls all.  It controls it judiciously.  The price mechanism says you’re running out of that.  If you want to have any to sell tomorrow, you better jack the price up.  You better raise the price.  Somebody goes and says: I wanted one of those, but I didn’t know it was going to cost . . . yesterday it only cost a dollar.  You’re charging two dollars today.  The price mechanism has just extended the supply.  Ditto that in reverse.  I can’t give this you-know-what away.  Let me lower the price from two bucks to a dollar and everybody comes in and everybody wants it. 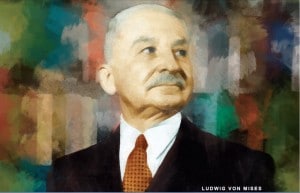