Mandeville, LA – Exclusive Transcript – “Either the ObamaCare mandate is unconstitutional in all its forms or its not. Here we are faced square again with something that continues to be, I think, a subject worthy of consideration.  Is the conservative endeavor and are conservatives to adopt and begin an embrace of and a promotion of their version of how a welfare state ought to run?  Some of us have grave issues with that.”  Check out today’s transcript for the rest…

Mike:  This story actually did occur and has happened.  We’ve been talking about this since the 23rd of April, 2010, the day the Obamacare Act was passed.  There are a lot of people that are exhorting conservatives to get into jerry-rigging the medical services industry, but just jerry-rigging it the way Republicans want it rigged.  [mocking] “You just gotta get in there and govern.  You gotta have an alternative.  You can’t replace something with nothing.  National healthcare is here to stay.”  Really?  Here to stay?  Nothing we can do to get rid of it?  We’re all stuck with it?  The latest fit of this comes from TownHall.com, “Tom Price’s Obamacare Alternative Could Save $2.34 Trillion Over 10 Years.”  Tom Price, of course, is a doctor, and a very nice man.  We’ve had him on the show before.  Dr. Price, a Republican out of Georgia, has proposed this alternative to Obamacare called the Empowering Patients First Act.

Here we are faced square again with something that continues to be, I think, a subject worthy of consideration.  Is the conservative endeavor…

Is the conservative endeavo and are conservatives to adopt and begin an embrace of and a promotion of their version of how a welfare state ought to run?  Some of us have grave issues with that.  I know I’m repeating myself, but perhaps it’s in a different hour and some of you haven’t heard this before.  I don’t have any desire — I can’t find the motivation or the passion even to plow into the [mocking] “All right, we’ll run the welfare state for you.  We’ll make it better.  It’ll be better than the lib, progressive, Democrat, Marxist version of it.”  Number one, how do you know that?  It seems to me that once you begin this process, there’s no stopping it.  It’s going to descend into corruption.  It always has in every instance it’s been attempted, and it will this time.  It doesn’t matter who it is that’s running it.

The fact of the matter is, when a governing authority gains that much power, there’s going to be abuse.  You just can’t rely on the angelic nature of Republican legislators who seemingly, I guess, the next thing you ought to say is [mocking] “There are two classes of people.  There are good people, and they’re all Republicans, and there are evil liars and corrupt people, and they’re all Democrats.”  Really?  You believe the red versus blue, Red Sox versus Yankees, socialist versus conservatives, this whole line of right versus left?  It’s not to say there aren’t differing opinions, but to believe that you can do a better job of running a welfare state than the other side is to believe in your own superiority.  It is to believe that this is the purpose, this is the modern purpose of government.  If that’s going to be the case, what do we need the Constitution for?  The Constitution is supposed to limit these things.  It’s not supposed to sanction them and engender them and empower them.  It’s supposed to prevent them.  If they are to occur, they’re going to occur where the government is closest to the people, and that’s in their states and in their localities.

Some of us bring a deal-breaker attitude to this.  There are others out there that insist the way to the electoral path to the future is to learn how to manage the welfare state, just manage it better than current management.  We’re going to keep Mordor on the Potomac as big and pernicious, as powerful and punishing and bellicose in its foreign policy as it is today.  We’re just going to put a sign out on the window of the White House “Under New Management.”  I think you can count me out of that.  Regardless of the motivations of Representative Price, and I don’t have any doubt that he views this as something that is a positive, the fact remains, what is the attractiveness or what would attract those conservatives to the project, to run and form and make a better welfare state?  I don’t know, maybe I’m just crocked in my head.  Maybe the people that want to do this are the ones that are on the right course.  I tend to think not, but only time will tell.

If I’m going to base what I tell you on a daily basis on history and on a fair reading of history and principles, then I’m going to remain, again, in opposition to this.  Representative Tom Price of Georgia has come up with this plan called the Empowering Patients First Act.

The proposed legislation would “provide Americans with tax incentives for maintaining health insurance coverage, improve access to health savings accounts (HSAs), reform Medicare and Medicaid, and allow consumers to purchase plans across state lines. It would also guarantee coverage for roughly 1% of Americans with pre-existing conditions.” 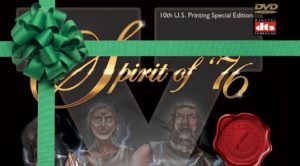 You can’t have it both ways, folks.  Either it does grant the authority or it does not.  If it does not for the individual, then I fail to see where there is any such a writ that can be forced then upon a collection of individuals under the style of a corporation or trust or partnership, or even a sole proprietorship. What if Peter Thiel, the guy that started PayPal, what if Thiel said: I’m going to start PayPal Health Services.  I’m the sole proprietor and I’m going to put all my money into it because I believe in the endeavor.  He’s one individual, doing business as one individual.  The same constitution that cannot force Thiel as a private citizen to purchase a health insurance policy can force him as a public citizen doing business to purchase one?  How’s that going to work?

In other words, I see these plans and, again, it’s not to second-guess Rep. Price’s motives or sincerity or anything of the sort.  I just think this is a bass-ackwards way — number one, it’s unprincipled and it’s going to lead to the same result over the long haul.  Then again, I get this from TownHall.com.  That’s not exactly what I would call a left-wing online blog, now, is it?  Why don’t one of you geniuses out there answer that question.  If you’re a fan of these plans, please explain to me where the authority for the must-carry preexisting condition comes from.  Where do you get that at?