Mandeville, LA – Church Doctrine – Nancy Pelosi  and Senator Mary Landrieu need to compare notes. Landrieu, quite possibly the most under-informed member of the United States Senate that is filled with intellectual wunderkinds like Senator Patty Murray.  But Murray may be a Rhodes Scholar compared to Landrieu. When asked if ObamaCare was Constitutional, Landrieu told a reporter  “[w]ell, we’re very lucky as members of the Senate to have constitutional lawyers on our staff, so I’ll let them answer that.” Gee, I thought the actual Senator took the oath to protect and defend the Constitution? The only oath the anonymous lawyer took was “ ‘til death do us Morris Bart.”

Now with the nightly comedy show that is news on ObamaCare, Landrieu is being asked more questions about her favorite “purchase” and has even offered pearls of wisdom that would make Benny from L.A. Law blush. “The website isn’t working how it should, which is unacceptable and it needs to be fixed as quickly as possible.” That’s mighty dubious for someone who provided the winning vote for the law to escape the Senate in 2010, maybe we can get those cold fusion generators fixed as quickly as possible too.

To date, 387 Louisiana citizens have signed up for ObamaCare while 80,000 were scheduled to lose the insurance, Landrieu and Murray et al said they needed to buy in the first place. Ironically all those who are to lose their plans blame Obama, who did not author this travesty, Landrieu & her constitutional lawyers did. Today, President Obama strode to his throne and ordered that a 1 year reprieve on policy cancellations be issued by the peasants’ insurance commissioners, sparing Landrieu the full wrath of the Who Dat [r]epublic next November. Pelosi famously said ObamaCare needed to be passed so we could “see what’s in it” but as Mary Landrieu might have learned, the Constitution and a functioning website were not. 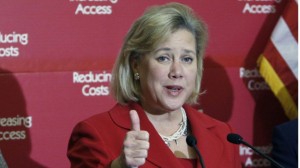 While this article is critical of the Senator, I suggest that it is a factual reflection of reality since the majority of the country also remains in a position of ignorance. Until the people get involved a like-kind response is expected from those you represent. Senator Landrieu, please allow me to answer on your behalf. If your question is referring to the Founding Fathers and their intent for our government the current direction of Healthcare is unconstitutional as it does not support any of the six principles:Common Defense, Establish Justice, Domestic Tranquility, Blessing of Liberty, Perfect Union and General Welfare. Most politicians will suggest that most laws fall under General Welfare. However, I ask what general welfare is there in transferring wealth from some to others in the form of subsidies for a personal decision such as insurance. In fact, this law is contrary to the General Welfare since in less than a decade the next generation will have to pay for this wealth redistribution program. What will General Welfare look like when that happens? Think about it! No Senator Landrieu this is not Constitutional, however the law will remain unless the people get involved.