Mandeville, LA Exclusive Audio and Transcript – I want you to just think about this for a moment.  Remember, we’re not supposed to have a general or federal government that runs around the countryside in search of American people to slay or monsters to slay.   That’s not supposed to be the job of the president, although in the 20th Century and now in the 21st Century, we’ve doubled down on this.  Check out today’s transcript and Daily Clip for more…

Mike:  “Secret kill list proves a test of Obama’s principles and will.”

Mike:  Did you see it, about the kill list?

Mike:     Rich Lowry writes about this at The Corner.  The story is written by Jo Becker and Scott Shane at New York Times.  Ladies and gents, it’s eleven pages long if you try to print it out on regular paper.  It is two full pages inside the Sunday edition of the New York Slimes.  That’s how big the story is.  What it basically amounts to is this: there are some, even those that call themselves liberals, that have become alarmed at Barack Hussein Obama, our dictator in chief, our assassinator in chief, they have become alarmed at Obama’s personal obsession with killing people.  He is the president, after all.

As Lowry notes in his rundown of the eleven-part story — what a horrible morning this is.  I’m going to have to agree with and read Rich Lowry?  Can we start over again.  I don’t want to have a day where I agree with the editor of National Review Online.  That’s just not a good way to start.  He breaks this down into four parts that he thought was interesting.  Part 4 is what interests me the most.

Obama’s belief that if he’s doing something, it must be okay.  A program to kill people without due process is just fine, so long as Barack Obama is making the decisions.  Michael Hayden makes this point . . .

Mike:  Folks, I want you to just think about this for a moment.  Remember, we’re not supposed to have a general or federal government that runs around the countryside in search of American people to slay or monsters to slay.  Of course, I’m transforming John Quincy Adams’ famous quote about going forth across the world in search of monsters to destroy.  That’s not supposed to be the job of the president, although in the 20th Century and now in the 21st Century, we’ve doubled down on this.

We certainly have made the president’s job — one, he gets to run the economy and gets blame or credit for it if it falls or rises; two, he micromanages other aspects of our lives; three, now he micromanages the United States of America secret kill list.  Of course, no one should have a problem with this because you slept safe and sound in your bed last night.  While you were having dreams and flights of fancy, Barack Hussein Obama was manning the secret kill list, making sure that no bad guys were going to sneak up on you in your sleep.  If they got within 6,000 miles, we’ll take them out.  So when the New York Slime story “Secret Kill List Proves a Test of Obama’s Principle and Will,” we find this.

“This program rests on the personal legitimacy of the president, and that’s not sustainable,” Mr. Hayden said.  “I have lived the life of someone taking action on the basis of secret O.L. C. [Mike: That stands for Office of Legal Counsel.  That’s the president’s lawyer] memos, and it ain’t a good life.  [Mike:  Listen to this.  Think about this, especially those of you that may still find yourselves as neocons, invaders and defenders of the planet.]  Democracies do not make war on the basis of legal memos locked in a D.O.J. safe.”

Mike:  What you basically have here, and as New York Slimes is busting the story, there is indeed, in the Obama Administration, a kill list.  On that list are American citizens.  It has been determined by the Obama Administration, this is what is troubling, that you don’t need due process.  Here’s what due process is according to Obama and his lawyers.  Due process, when it comes to taking someone out, killing someone, executing them, assassinating them and what have you, due process is Barry Obama picking up the red phone in the White House, calling down to the legal counsel’s office and saying, [mocking Obama] “Hey, I want to whack this guy.  Can I?  I want to kill him.  Let me.  Send one of them Seal teams in there to take him out.  They look like a threat to me.  I’ve been following this cat since I got here three years ago.  This guy needs to wake up and smell the gun powder.  Can I kill him?  I want to kill him.  I want to get an order.”

The legal counsel will then consult with the department of injustice and the attorney general.  Amongst themselves, they will determine whether or not the kill is justified.  If it is, they tell Obama, [mocking] “Yeah, whack him.  Go ahead.  Take him out.”  That’s due process.  Does that sound like due process?  Let me ask the question in a different manner.  What if an American citizen living in Denver, Colorado, say, where the subject of this due process call.  [mocking Obama] “I want to kill him.  I want to take him out.  He looks like a bad guy to me.  Intelligence says he might vote for Romney, too, so let me kill him.”  What if the AG reports back, [mocking] “Yeah, I guess so.  Yeah, sure, go ahead, take him out.”  Then he finds himself dead, or this particular individual turns up being on the receiving end of the Obama Administration’s due process.

Do you think that the Romney White House is going to give this power back when the Romney White House will quite possibly be populated with the likes of John Bolton, John Yoo, the guy that told George Bush he didn’t need a declaration of war to invade Iraq, Bill Kristol?  Do you really think they’re going to give that power back or will it just be another one of these extremisms that just becomes a way of life and people don’t really consider it or think it’s a bad thing?  [mocking] “We’ve got terrorists out there.  We got to stay safe.”  Think about that.  Somebody should ask Governor Romney that question, don’t you think? 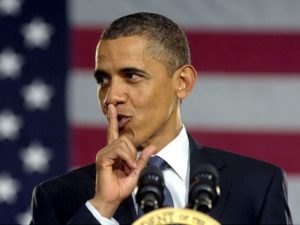 Mike, you’d better watch out. Mr. Holder’s assertion that due process is satisfied behind closed doors by the executive branch is particularly creepy atop the authorities this government has granted to itself by the Patriot Act , the recent appropriations bill, and more recently the the Internet Security Act. Without warrants or judicial review, it may now listen to our phone calls, read our emails, detain us indefinitely and execute us once the President determines we are a threat to national security – as he chooses to define it. Never believe that any of us who believe that this government has overstepped its rightful bounds and must be unwound if we are to survive could not someday be characterized as terrorists and treated accordingly by those who seek to hold onto the tyrannical power they have assumed! God help us!

Mike, this is truly a frightening predicament. You are correct in presuming that once this power is obtained by the government, it will never be returned or discarded. People seem to be so willing to give up their freedom and liberties. One after the other they have been snatched away from us, while most of us sit back and accept it under the guise of “oh, well, they know better than us…” What a shame, what a disgrace.