Mandeville, LA – Exclusive Transcript – What is the future of drone warfare?  There are some of us that believe that the intervention that has been taking place must end.  The words “ending the war on terror” are never going to be uttered as long as our bellicosity continues.  Glenn Greenwald points this out and has been pointing this out for years and years and years.  Until you stop holding sticks and thrusting them into hornets’ nests, there can possibly be no end to this.  Check out today’s transcript for the rest…

Mike:  What is the future of drone warfare?  There are some of us that believe that the intervention that has been taking place must end.  The words “ending the war on terror” are never going to be uttered as long as our bellicosity continues.  Glenn Greenwald points this out and has been pointing this out for years and years and years.  He will be with us on the last half hour of the program today.  We’re certainly looking forward to that.  Until you stop holding sticks and thrusting them into hornets’ nests, there can possibly be no end to this.

One of the ways that you can stir the hornets’ nest is to use these things called drones, these unmanned aerial vehicles, UAVs.  This is the sterilized warfare that has been prophesized about by science fiction writers and those that fear interminable and perpetual war.  When the actual costs of war are not experienced by humans, meaning you have some officer or technician operating the drone in a trailer or cave somewhere thousands of miles from where the ordnance is going to be dropped, thousands of miles from where the screams and cries of those that have just been bombed can be heard, without the smell of gunpowder or whatever it smells like after you drop one of these bombs that a drone would carry, you sterilize the situation.  It’s nothing more than a videogame now.  There is no human cost, no human toll.  No one actually sees this.  This is how you can perpetuate a war, and this is how you can make it palatable to people.  [mocking] “They’re not real people; they’re just blips on a video screen.  Drop another one over there.”

President Obama: As was true in previous armed conflicts, this new technology raises profound questions about who is targeted and why, about civilian casualties and the risk of creating new enemies, about the legality of such strikes under U.S. and international law, about accountability and morality. Let me address these questions. To begin with, our actions are effective. Don’t take my word for it. In the intelligence gathering at Bin Laden’s compound, we found that he wrote “we could lose the reserves to enemies’ airstrikes. We cannot fight airstrikes with explosives.” Other communications from al-Qaida operatives confirm this as well. Dozens of highly skilled al-Qaida commanders, trainers, bomb makers, and operatives have been taken off the battlefield. Plots have been disrupted that would have targeted international aviation, U.S. transit systems, European cities, and our troops in Afghanistan. Simply put, these strikes have saved lives.

AG:  Is the counterargument to that that the drone strikes are much more selective in the ability to target said terrorists than, say a mortar shell from a Howitzer where there is more chance of unnecessary civilian death?

Mike:  It depends on, I guess, who you’re dropping it on.  Take the example of Anwar Al-Awlaki and the subsequent targeting of Awlaki’s — although they claim that they were not trying to kill his son, but his son in Yemen was the recipient of one of these strikes.  If you listen to these stories that Afghanis and Yemenis tell, it’s not just that there were two or three drone strikes that were used.  It’s that there have been hundreds of drone strikes.  With regularity they seem to drop out of the sky.  Anytime you have any kind of collateral damage, I always like to use the comparative method.

If the same thing happened in a state inside the United States, what would our response be?  What if the Chinese said: We have this corporate terrorist.  He’s over here stealing our trade secrets.  He waged war on one of our companies and then he fled.  We traced him back to San Diego.  When we found him, we gave our intelligence officers the go-ahead to take him out before he could strike us again.  If you drop munitions on a neighborhood in San Diego — let’s say the Chinese actually got their man.  Let’s say that in getting their man they took a couple Californians out with them.  What would our response be?  Our response would be, [mocking] “That’s an act of war!”  That’s my objection to the use of the drone.

Do you remember that day when we did the show and I said this is the new warfare when there’s not actually any war going on, just a bunch of kids who are really good at video games sitting in room and thinking they’re playing videogames but they’re actually killing real people across the globe?  We got all those tweets and emails saying: Mike, that actually is a book.  Someone has actually taken that and made that into a novel.

AG:  I guess the clarification, you’re not condoning using what would be deemed as traditional methods of killing terrorists more so than drone strikes?

AG:  So you’re not saying: If we’re going to do it, we should be using mortars in the traditional sense of what they are, right?

Mike:  That would just be a different method.

Mike:  The point is, and when we have Glenn Greenwald on — as a matter of fact, doesn’t his column today deal with that?  Yesterday’s Greenwald column deals with this very subject of discussion.  We were talking about the machete-wielding lunatic that took the officer out on the streets of London the other day.  [mocking] “This was an act of barbarism.  This was an act of terrorism unseen in the annals of human history.”  Greenwald says: No, it’s not!  Here, “Was the London killing of a British soldier ‘terrorism’? What definition of the term includes this horrific act of violence but excludes the acts of the US, the UK and its allies?”  No, there wouldn’t be any difference in that.

The president claims, [mocking Obama] “Look, we’ve been experimenting with these drones.  Now what we gotta do is, let’s tighten the use of the drones up.”  I don’t believe this for a moment.  I think that, again, this is posturing.  To make a modern pop culture reference, this is an RSTLN&E from the Wheel of Fortune.  These are the things you have to do, whether you want to do them or not.  You’ve got to get out there and say certain things, and this instance is one of the certain things.  Here’s President Obama outlining the strict use, that we’re only going to be using these in strict, limited instances.

Mike Church Show Transcript: Do States Have the Power To Charge Treason

President Obama: To say a military tactic is legal or even effective is not to say it is wise or moral in every instance. The same progress that gives us the technology to strike half a world away also demands the discipline to constrain that power or risk abusing it. That’s why, over the last four years, my administration has worked vigorously to establish a framework that governs our use of force against terrorists, insisting upon clear guidelines, oversight, and accountability that is now codified in the presidential policy guidance that I signed yesterday.

Mike:  Here’s the one I really want to hear.  Here are the conditions under which we will not use drones.  Listen.

President Obama: We only target al-Qaida and its associated forces, and even then the use of drones is heavily constrained. America does not take strikes when we have the ability to capture individual terrorists. Our preference is always to detain, interrogate, and prosecute. America cannot take strikes wherever we choose. Our actions are bound by consultations with partners and respect for state sovereignty.

Mike:  Can you pause it right there?  Partners?  Partners?  What is this, the Amazing Race?  What’s a partner?  We only do this in consultation with partners.  So you place a call to the emir or sultan of wherever and say, [mocking] “Hey, it’s Barry.  I’ve got a drone flying about 35,000 feet.  It’s accurate within 100 yards or so.  We’re going to be carpet bombing some residences where we think one of our guy’s in.  What’s that?  What?  Yeah.  No, no, we don’t want to capture the guy.  You think we want to go through the interrogation and trial and all that stuff?  It’s messy, messy, messy business.  No, no, this will all be — you won’t even know it happened.  By the way, this call never happened.”  There’s just something malevolently wrong with discussing the use of lethal force in foreign lands like this in the way in which he is discussing it. 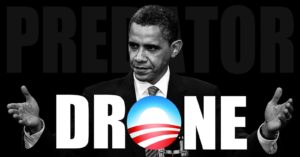