Mandeville, LA – Exclusive Transcript – As Obamacare crumbles all around him and will either be remembered as the boondoggle that it is destined to become, or as the greatest overreach in American political history that ultimately was corrected by successive congresses and successive elections, what is it then that President Obama is remembered by?  He could be remembered as actually becoming the great healer.  Check out today’s transcript for the rest…

Mike:  Back to the attorney general, Eric Holder, for just a moment here.  Patrick J. Buchanan has a post yesterday in his syndicated column, “Shut It Down, Mr. President.”  I won’t read the whole thing to you, but I’d like to share the last five paragraphs.

Mike:  AG, what is Marion Barry doing these days?

AG:  Mayor for life.  He’s on the city council.

Mike:  What’d you call him, mayor for life?

Mike:  Are there mayor for life t-shirts and stuff you can get?

AG:  He is so loved in this city for whatever reason.  It’s hilarious.

Mike:  He’s a celeb, all right.  So Buchanan is writing about Marion Barry.  Marion Barry has brought his healing touch to the proceedings.

The Zimmerman verdict was “awful,” he said, another example of “institutionalized racism.” But look to Marion to find a bright side.

“The good news is that Zimmerman will never be in peace. He won’t be able to get a job. He’ll have to go underground, travel incognito and never live in peace. That’s the good news for me.” [Mike: Such wonderful acts of human kindness, virtue, and Christian humility on behalf of the former mayor, or mayor for life rather.] Now a comment like that might befit a James Earl Ray. But George Zimmerman?

Who turned this neighborhood watch fellow, well-liked by all in his community, into some racist monster?

The night of the verdict, Mark O’Mara gave America the answer. [Mike: O’Mara is one of Zimmerman’s attorneys.]

George “didn’t know why he was turned into a monster,” O’Mara told the assembled journalists. “But quite honestly, you guys had a lot to do with it. You took a story that was fed to you, and you ran with it, and you ran right over him, and that was horrid to him.”

Like his partner Don West, O’Mara exhibited moral courage in that post-verdict press conference, as did that jury of six women, who rejected the prosecution’s pleas to at least give them manslaughter or child abuse.

President Obama might now exhibit a little moral courage of his own, by directing his Justice Department to halt this scavenger hunt for a “hate crime.” If Sanford police and the FBI could not find a hate crime, and the prosecution could not prove racial profiling or malice, what reason is there to believe any such motive ever existed?

If Barack Obama and Eric Holder capitulate to Al Sharpton’s demand for “Plan B” and the NAACP’s demand for a second trial of George Zimmerman for a crime of which he has been acquitted, most Americans will come to believe this is no search for justice, but a drive for racial retribution and revenge. And they will be right.

Mike:  That’s from Patrick J. Buchanan, former advisor to Richard Nixon and thrice a presidential candidate himself.  I think that would be something that, if President Obama wanted to be magnanimous — he’s always allegedly worried and concerned about his legacy.  [mocking Obama] “What’s my legacy gonna be?  I gotta preserve my legacy.  What’s it gonna be?”  As Obamacare crumbles all around him and will either be remembered as the boondoggle that it is destined to become, or as the greatest overreach in American political history that ultimately was corrected by successive congresses and successive elections, what is it then that President Obama is remembered by?  He could be remembered as actually becoming the great healer.

He could go a long way and do an awful lot of good by changing his tune and, as I said, adopting a humble approach to this and being magnanimous.  In other words, by saying something to the effect of, [mocking Obama] “We have a jury system.  The jury system was put into place.  It has been time honored in this country and it was used in Florida.  It rendered a verdict under the laws of the State of Florida.  We need to honor that verdict.  We need to, yes, mourn for the tragedy of the loss of life, but we all need to move on with our lives and all need to learn to” — I’m trying to think what he would say next — “all need to learn to exist together without looking for things to divide us.”  Then just walk away.  No need to dawdle on it.  Just say that little piece right there and walk away.  Then presidential cover and presidential license, the prestige of the White House evaporates immediately over all this and probably all just dies down and goes away.  Otherwise, it will continue.

May I say to you that I have talked about this and have read this little clip I’m about to read to you a couple times in the last six years on the show.  I think it is relevant to read it today.  It’s from Melvin Bradford’s great book The Reactionary Imperative: Essays Literary and Political.  Bradford had come to view some of the struggle that you and I would call today the civil rights struggle.  He doesn’t really talk about the legal ramifications of the civil rights struggle.  What he does in this essay about rhetoric and respectability, what he does point out — I think it’s one of the most prosaic things ever written about this subject — is that when a people, all of us, adopt a constitution, they adopt a constitution as a system and form of government, a set of rules under which a government can operate.  This is what Bradford called a nomocratic document.  Again, I don’t want to get anyone confused.  This is morning drive radio.  You want to hear good, entertaining stuff.  I’ll get to that in just a second.

What he meant by that was you have a constitution and it’s a rule book, basically, on how you run a federal government.  It’s not a charter of rights.  It’s not a license or a writ that says we, for the rest of our known existence here, have to continue debating, arguing over, and pursuing this thing that many people seem to desire to pursue, this more perfect union.  If you do that, this task will never end.  The task is also not much of a goal because it can’t ever be satisfied.  There will always be those that will benefit from the fact that the acrimony or that the task exists.  If you use your constitution to do this, then you undermine all the other beautiful things that that constitution was supposed to do, which was to leave much of governance in the hands of the people, like, I would say, the people of central Florida, Sanford, Florida, where the trial took place, and in the Florida Legislature where that law was written.

This is what is missing today.  Somebody asked me earlier, [mocking] “Do you think any of this is gonna be corrected?”  No, because we pursue things as though we have a constitution so that we can continue to invent new rights to live under, instead of having any responsibilities for them and assigning responsibilities or taking responsibility, and also instead of just getting back to and acknowledging that the Constitution is a set of laws, a set of really good laws.  It is not an ecclesiastical writ that is to be used to pursue utopian ends.  Folks, if there’s one thing we should learn from the great tyrants in history and the horrific episodes of human suffering under the great tyrants of history, it’s that they all sought and promoted one thing.  They promoted utopia.  They said if you do it my way, if you do this, if you adopt this, we’ll have the Garden of Eden on Earth.  We’ll have utopia.  That is not the way that history shows us any of that has happened.  Bradford writes about this in The Reactionary Imperative, “Rhetoric and Responsibility, writing in 1981.  When he says the past 30 years, he’s going back to 1951.

To apply the rhetoric of the common good to the last thirty years of civil rights revolution is to ask whether the changes produced by Court and Congress in the official situation of the American Negro have been worth the danger to us all which went with these transformations of the United States Constitution: the risk of converting a nomocratic, customary, procedural government into a power able to attempt whatever it thinks fit [Mike: See Eric Holder. See Barack Obama.] into a teleocratic instrument, ready and able to do whatever it defines as good. It is to ask whether the tradition of restricted federal authority produced and nurtured by 200 years of American history must give way because the grievances or misfortunes of one segment of our population are more important than limitations on the scope and outreach of the law which honor the liberty of all free men—or at least attempted to do so before the fundamental law was reconstructed by judicial ingenuity into something new and strange. [Mike: Of course, 30 years later, it’s not new and strange now. It’s this ubiquitous umbrella of never-ending complaints that we live under.] And to question further what unexpected things hurried through the door shielded by proximate talk of civil rights after legislation and the rulings of various courts broke it down and allowed mere politicians (administrative and judicial, as well as legislative) to think of the Constitution as law always unfinished-like a big turnip, but with no end to its growth. The proper response to such confusion in constitutional morality lies not in praise for civil disobedience and pictures of Martin Luther King to decorate our walls but in what Judge Brevard Hand of the Mobile District has written of Mr. Justice John Stevens’s timeserving concurrence in the case of Runyon us McCrary (1976): that a true court of American law “feels a stronger tug from the Constitution, which it has sworn to support and defend.” So may men reason in applying the rhetoric of the common good.

There are of course prudent arguments which work in an opposite direction on all three of these questions, arguments which amount to more than a noisy litany concerning natural rights. The doctrine of cupidity may be answered without recourse to ultimate terms and the nature of any conversation concerning policy alternatives brought back within legitimate boundaries, where the norms important to conservatives will also get a hearing. In such exchanges conservatives will be on their own ground: ready with a way of dealing with conflicting principles, with (for an instance) the balance between the legitimate rights of persons disadvantaged by reason of color alone and the essentially conservative desire of a mother to keep her children away from schools where nothing is to be learned but vulgarity, violence, desperation, and the logic of racial hatred. On these grounds we may concede a little generosity in the name of that larger community to which all of us belong—and in which we must all be allowed a share and place. On these grounds, but not any others.

Mike:  Melvin E. Bradford’s chapter in The Reactionary Imperative.  Yes, I will post a link to that work if you’d like to get it at Amazon.  I think it’s already in the Library at MikeChurch.com. 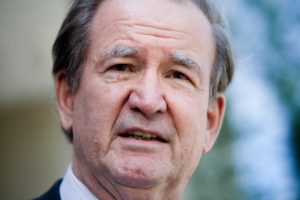