Mandeville, LA – Exclusive Transcript – Is it then possible that poverty is not an economic condition in life, that one of the symptoms of it may be lack of financial mobility or success?  But don’t we have enough evidence around us to show it is far more likely that poverty is a moral and existential condition, that it is brought about by a lack of values and a lack of a life ordered in a certain way?  Check out today’s transcript for the rest…

Mike:  Do we have the President Obama commencement address at Morehouse College in Atlanta?  From the Weekly Standard, you find this headline: “Obama Uses Commencement Address to Recall Jim Crow, Racism.”

Mike:  Here is a clip from what the president said:

President Obama: The history we share should give you hope. The future we share should give you hope. You’re graduating into an improving job market. You’re living in a time when advances in technology and communication put the world at your fingertips. Your generation is uniquely poised for success unlike any generation of African-Americans that came before. But that doesn’t mean we don’t have work — because if we’re honest with ourselves, we know that too few of our brothers have the opportunities that you’ve had here at Morehouse.  In troubled neighborhoods all across this country — many of them heavily African American — too few of our citizens have role models to guide them.  Communities just a couple miles from my house in Chicago, communities just a couple miles from here — they’re places where jobs are still too scarce and wages are still too low; where schools are underfunded and violence is pervasive; where too many of our men spend their youth not behind a desk in a classroom, but hanging out on the streets or brooding behind a jail cell.

My job, as President, is to advocate for policies that generate more opportunity for everybody — policies that strengthen the middle class and give more people the chance to climb their way into the middle class.  Policies that create more good jobs and reduce poverty, and educate more children, and give more families the security of health care, and protect more of our children from the horrors of gun violence. That’s my job. Those are matters of public policy, and it is important for all of us — black, white and brown — to advocate for an America where everybody has got a fair shot in life. Not just some. Not just a few.

Mike:  So there is a direct connection between employment and violence apparently, if you live near an inner city.  He never gets into what causes these problems.  What’s at the root cause of the problems that he outlined and identified?  Remember last week I told you about how Mayor Mitch Landrieu of New Orleans is trying to intimate that — there was a shooting on Mother’s Day.  There were 19 people that were injured.  The three perps have now been caught.  They are very stereotypical of the perpetrators of these kinds of violent acts turn out to be ultimately.  Landrieu was trying to turn attention, just like Obama, there’s not enough opportunity in inner cities, waves of violence, and there is rampant poverty and what have you.

What is the cause of that?  Wasn’t there rampant poverty before all the glorious civil rights revolutions of the 1950s and 1960s?  Wasn’t that one of the things that the government’s intrusion into making things fair and equal, wasn’t that part of why they had to get involved in the whole thing?  Wasn’t it a cause célèbre for those that promoted it?  [mocking] “If we lend a helping hand, you just wait and see all the wonderful things that they can do.”  Well, Obama is basically pointing out that his own preferred solution for the problems that he’s whining and carping about have failed demonstrably.  They have been unbelievable failures.  There seems to be no end in sight of such failures.  That’s what he’s basically saying here.  It’s not as though there has not been a massive amount of attention and an unbelievably high, massive mountain at money thrown at the problem, yet the problem persists.

Is it then possible that poverty is not an economic condition in life, that one of the symptoms of it may be lack of financial mobility or success?  But don’t we have enough evidence around us to show it is far more likely that poverty is a moral and existential condition, that it is brought about by a lack of values and a lack of a life ordered in a certain way?  We know traditionally if you do certain things and believe in certain things, you probably will not succumb to poverty.  You can go and show up at these addresses.  The amazing thing to me is you can still complain about these things 70 years after the exact remedies of people like President Obama still think need to be applied.  You can admit that they don’t work, yet somehow some people want to continue the same process.  Why is that?  Could it be that poverty is a really good business and provides job security to tens of thousands if not millions of those that are in the poverty-servicing governmental industry?  I bet that’s far more likely than there are people out there trying to hold other people down.  As the old saying goes, [mocking] “I know why this is going on, because of the Man.”  I have some of the transcript of what the President said.  Listen to this:

So your experiences give you special insight that today’s leaders need. If you tap into that experience, it should endow you with empathy – the understanding of what it’s like to walk in somebody else’s shoes…it should give you the ability to connect. It should give you a sense of what it means to overcome barriers.

Whatever success I achieved, whatever positions of leadership I’ve held, have depended less on Ivy League degrees or SAT scores or GPSs, and have instead been due to that sense of empathy and connection – the special obligation I felt, as a black man like you, to help those who needed it most; people who didn’t have the opportunities that I had, because but for the grace of God, I might be in their shoes.

Mike:  Isn’t he actually saying that he was in their shoes?  That’s the way I read it.  He says he was in their shoes and then goes on to contradict himself.  President Obama could be much more of a laudatory and inspirational figure if he would just stick to the line of his own biography.  It’s a pretty good biography to share with anyone.  This kid that comes from a broken family, has to be raised by his grandmother — much like the story of Clarence Thomas by the way — is able to rise to the lofty heights in public life that both Thomas and Obama have risen to.

Isn’t that a pair of amazing success stories?  Clarence Thomas, when he was being confirmed as a Supreme Court Justice was fond of talking about that, very fond of talking about his grandparents and how he was able to get an upper hand.  Thomas even admitted in some of those conversations: I know there were things that were actually rigged in my favor that led to my success.  Thomas argued that he thought he could have achieved those things anyway.  Obama has pretty much the same storyline, except President Obama’s course went through and has been spent fraternizing with “those on the left,” as we hear. 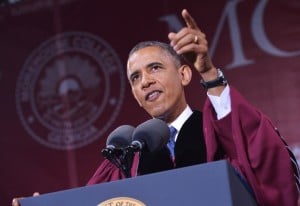