Mandeville, LA – Exclusive Transcript – In other words, the president has told his daughters: Don’t get a tattoo to try and strike back at me or your mother.  I immediately, critical thinking brain of mine, I immediately thought of one thing.  There was one thought that occurred to me.  Mr. President, explain how either of your daughters could possibly get a tattoo.  How could they even find their way into a tattoo parlor without the entire planet knowing that they were there?  Check out today’s transcript for the rest…

Mike:  I was keeping up on the news.  As a matter of fact, we had a phone call on this in the opening moment of the program because I mentioned the Obama tattoo ban.  This is a story from CNN.  I read this last night.  My thought was, as I was reading this: If President Obama wasn’t such a pro-choice, big government student of the progressive era, he’d probably be an okay guy.  Just like Bill Clinton, if Bill Clinton wasn’t Bill Clinton, you’d probably like Bill Clinton.  [mocking Clinton] “Most people like me anyways, Mike.  They try to pay me all kind of money to come hang out with them and talk at their events and all sorts of stuff.  Whether you like me or not, no matter.  Hillary and I are doing just fine.”  As I was reading this, I was just thinking to myself: How many of your average “conservative” can even read this story without screaming some Obama obscenity at it simply because the subject of the story is the president, the most despised of all despised presidents in the annals of the modern conservative movement.  Nonetheless, you do get a window into the other side of the Obama family.  By the way, I’m trying to train my voice so I can say President Obwauma like CNN’s Brianna Keilar demonstrably pronounces it.  [mocking Keilar] “Well, Wolf, President Obwauma.”  I can hear this woman from two rooms away say President Obwauma.

President Barack Obama says he and the first lady have a good strategy to prevent their daughters from getting tattoos.

“What we’ve said to the girls is, if you guys ever decide to get a tattoo, then mommy and me will get the exact same tattoo in the same place. And we’ll go on YouTube and show it off as a family tattoo,” he said in an interview that aired Wednesday on NBC’s “Today.”

He said his daughters, Sasha and Malia, have kept him “posted on what’s cool and what’s not.”

AG:  I don’t have a Reddit account, but it’s basically just a message board on any number of different topics from the interesting to the obscene.  You can find basically the entire good and bad of the internet on Reddit.

Mike:  You can also link to other people’s stories and what have you.  The Reddit people were involved — we had the story on Monday and I didn’t get to it.  Maybe you can fill in the details.  I’ll have to fish through the pile to get to the story.  The editors of Reddit were involved in part of the amateur sleuthing manhunt for what ultimately turned out to be the Tsarnaev brothers and had identified the wrong guy last Wednesday or Thursday.  [mocking] “We found the perp of the Boston Marathon bombing.  It’s this guy in this picture right here.”  Isn’t that what happened?

AG:  Yeah.  They identified I think between five and eight potential suspects.  What ended up happening was two of those guys were put on the front page of the New York Post in quite the —

Founders TV: We Have An Empire… Should We Just Face It?

AG:  Yes.  While they weren’t labeled as suspects on the New York Post, the headline was something to the effect of “FBI wants to question these two.”  Turns out one was like a 17-year-old track star in Boston who happens to be of Middle Eastern skin tone.  Reddit first fleshed out the idea of let’s crowd source all these photos.  We have thousands of eyes that can look at it.  Kind of what we talked about last week, the good and the bad of Reddit was very evident, of Reddit 4chan and many other sites that started to put that stuff up.  It’s interesting.  It sucks for those two guys.  The kid apparently just doesn’t even want to go out in public due to what Reddit and the New York Post did to him.  They at least have been — once the FBI named the two suspects, they then went through all the photos and were trying to find more and more photos of him than they had previously.  I guess part of the reason people think the FBI released those two photos was to stop Reddit from continuing this rampant online speculation that was going on that was getting linked to mainstream sites like HotAir or New York Post.

Mike:  It’s just the height of irresponsibility.  It just goes to show you that the energies that are applied and the efforts applied in the social media circles, even when it comes to matter that are of life and death, they’re not the kind of energies and they certainly are not exercising the kind of discretion that you would expect to see.  What in the hell is wrong with the publishers of the New York Post?  This is Rupert Murdoch’s outfit.  He’s already had to shut one newspaper down, the Weekly World News.  That scandal has yet to settle over in merry old England.  The New York Post just continues to be unimpressive.  The fact that they fell for the [mocking] “We’ve got to get newspapers out there and people are gonna buy ‘em.  Who cares if it’s accurate or not?  We’re talking about sales!  Get out there and sell, sell!”  What a wicked time in which we live, ladies and gentlemen.  Back to the tattoos.  I was wondering out loud if the Obamas had a Reddit account.

Their tattoo threat, for example, is a good tactic to “dissuade them from thinking that that’s somehow a good way to rebel,” he said.

Mike:  In other words, the president has told his daughters: Don’t get a tattoo to try and strike back at me or your mother.  I immediately, critical thinking brain of mine, I immediately thought of one thing.  There was one thought that occurred to me.  Mr. President, explain how either of your daughters could possibly get a tattoo.  How could they even find their way into a tattoo parlor without the entire planet knowing that they were there?  They do have this thing called a secret service detail that follows them around 24 hours a day, seven days a week.  Those kids probably can’t go to the bathroom without five or six armed spooks escorting them to and fro.  By the way, for those of you that continue to inquire and then insist, [mocking] “You gotta stop using the term spook.  It’s not cool.”  Back in the day, in the ‘60s, ‘70s and ‘80s, a spook was someone you referred to when you were talking about Russian double agent spies or G-Men.  I’m not going to stop using it.  That’s the manner in which I mean to use it.  Get over it.  So how could Sasha and Malia get a tattoo without, as I said, the entire planet knowing about it?  Furthermore, what person in their right mind is going to tattoo a juvenile, a minor that just happens to be the daughter of the President of the United States, who basically is king of the world?  Who’s going to do that? 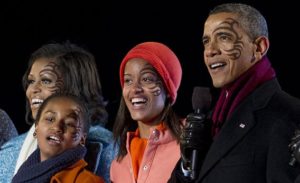