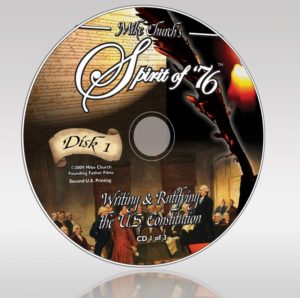 Mandeville, LA – Exclusive Transcript – “Federal Convention of 1787 began 227 years ago today.  It was to meet in Philadelphia to consider amendments to the Articles of Confederation.  That’s all it was supposed to do.  It wasn’t supposed to be secret.  Few of the things that happened were actually supposed to happen.  It is thought by many, or fantasized by many, that those events that I just described happened generically, and that the convention decided that they ought to do those things.”  Check out today’s transcript for the rest…

Mike:  So he’s telling Washington all these great things that are going to happen in this convention to propose this new national government, with a new national executive, with a new national judiciary with supreme powers that’s going to be able to veto the laws of the states.  Yeah, but we’ll keep you local yokels around for certain things that you guys can do better than we can do here in the hallowed halls of wherever the new Congress is going to be.  At the same time, he’s telling Washington: Look, one of the things that is proceeding quickly in the Confederation Congress is the agreement over the Northwest Territory, which, at the time, was the most widely debated, hotly debated subject in the entire North American colonies.

He’s telling Washington: Look, if we didn’t have our Confederation Congress meeting in New York — which is where they were meeting — and we moved it south, we may be able to convince some of the southern members that they should go along with the ordinance.  Of course, that did not happen, but with Maryland making a compromise, the Northwest Ordinance is ultimately passed.  His point in bringing it up is that we could deal with it better if we had a stronger national authority and didn’t have to listen to the bellyaching of all the individual states.  That was his point in bringing it up to Washington.  [mocking] “Look, dude, I didn’t want to vote for it but I had to because of all the other states that are crybabies.”

So what have we just learned?  Federal Convention of 1787 began 227 years ago today.  It was to meet in Philadelphia to consider amendments to the Articles of Confederation.  That’s all it was supposed to do.  It wasn’t supposed to be secret.  Few of the things that happened were actually supposed to happen.

It is thought by many, or fantasized by many, that those events that I just described happened generically, and that the convention decided that they ought to do those things.  That’s just a pile of hooey.  We know, since the letters were left for us to read, that Madison and Hamilton and others had always conspired to have the door shut, to have the meeting be secret, and that they should propose an entirely new form of government, and they ought to jettison and throw the Articles of Confederation overboard.

There are a couple of things that are very important to note here in this.  How could they meet together and conspire to overthrow or get rid of the Articles of Confederation?  Remember, we’re told by the Lincoln nationalists today — you know who they are — that the union entered into under the Articles was indissoluble, a perpetual union.  It could never be broken.  Once you enter into it, you can never leave.  It’s like Hotel California; it’s Hotel Confederation.  You can check in anytime you like but you can never leave.  If that were the case, then in the Constitution, wouldn’t there have to have been, wouldn’t they had to have proposed a separate dissolution of the Articles of Confederation so that they could even get to ratifying the new document?  Did you hear Madison mention anything about it?  No.  Do you know why?  Because no one thought that there was anything that was indissoluble about the union, that’s why.

So what are we learning here, class, on May the 14th, 2014?  We are learning that the framers of the Constitution and those that conspired for the Federal Convention were as revolutionary a lot as were the men that declared independence from the British crown a mere eleven years earlier, aren’t they?

They are fully apprised of and fully willing to use their independence and sovereignty to break one union and start a new one.  Since there’s nothing in the new constitution that’s about to be ratified a little more than a year into the future in 1788 that would say anything about indissoluble, indivisible unions or anything of the sort, well, then, doesn’t it make sense — of course it does — that the independence that enabled the Federal Convention of 1787 was still with the states when they entered into a ratification of the compact known as the Constitution in 1788?  Of course it does.  This is the point that is made by Albert Taylor Bledsoe in the book Is Davis a traitor; or, Was secession a constitutional right previous to the war of 1861?  As we can learn here from the start of the Federal Convention of 1787, of course there was.  There were no dissenters on this.  There’s nothing in the historical record that would suggest that anyone went: Hey, guys, we can’t do this because we’re indivisible.  We’re kind of stuck together forever, so we kind of have to remain together.  We are family.