Mandeville, LA – Exclusive Transcript – In other words, what the original progressive charitable people wanted to do was eliminate all the slobs out there, eliminate all the people that weren’t them.  In other words, let’s build a master race right here in the United States.  We won’t have any poor people and we won’t have to have any philanthropy or charity.  The problem with charity is it creates more poor people, in other words, and more people in need.  Screw the least of these, which explains the attitude, the death culture behind abortion.  Check out today’s transcript for the rest…

Mike:  Gracy Olmstead writes this — John in Virginia, hang on just a second.  I want to get to this call about the Virginia — I’ve been teasing this all day.  I like and admire Gracy’s work at American Conservative Magazine so much, I can’t think of anything that she’s written that I haven’t posted in a Pile of Prep.  It speaks to me.  If it speaks to me, maybe it speaks to you; then again, if you’re going to use me as a weather vane of popular opinion, I think you’re probably going to wind up on the antiquated, old, fuddy-duddy [mocking] “nobody buys anything or listens to or reads anything like that, Mike.  Who wants to read books from the 1880s?”  We have modern authors that are radio hosts, not like you.  I digress.

No one would deny that American philanthropy is grounded in good motives. But as The New Atlantis contributor William Schambra points out in a detailed article, philanthropy can become as poisoned as any other human venture.

Mike:  By the bye, since I read this last night, and I did tweet it out and Gracy graciously favorited my tweet, I will say that I think Mr. Schambra is spot on point on this.  Here’s what he wrote in part:

America’s first general-purpose philanthropic foundations — Russell Sage (founded 1907), Carnegie (1911), and Rockefeller (1913) — backed eugenics precisely because they considered themselves to be progressive. [Mike: Folks, be very careful of charity that you do not directly, materially participate in, which is what Jesus commanded us to do anyway.] After all, eugenics had begun to point the way to a bold, hopeful human future through the application of the rapidly advancing natural sciences and the newly forming social sciences to human problems. By investing in the progress and application of these fields, foundations boasted that they could delve down to the very roots of social problems, rather than merely treating their symptoms … According to the perspective of philanthropic eugenics, the old practice of charity — that is, simply alleviating human suffering — was not only inefficient and unenlightened; it was downright harmful and immoral. It tended to interfere with the salutary operations of the biological laws of nature, which would weed out the unfit, if only charity, reflecting the antiquated notion of the God-given dignity of each individual, wouldn’t make such a fuss about attending to the “least of these.” Birth-control activist Margaret Sanger, a Rockefeller grantee, included a chapter called “The Cruelty of Charity” in her 1922 book The Pivot of Civilization, arguing that America’s charitable institutions are the “surest signs that our civilization has bred, is breeding and is perpetuating constantly increasing numbers of defectives, delinquents and dependents.” Organizations that treat symptoms permit and even encourage social ills instead of curing them.

Mike:  In other words, what the original progressive charitable people wanted to do was eliminate all the slobs out there, eliminate all the people that weren’t them.  In other words, let’s build a master race right here in the United States.  We won’t have any poor people and we won’t have to have any philanthropy or charity.  The problem with charity is it creates more poor people, in other words, and more people in need.  Screw the least of these, which explains the attitude, the death culture behind abortion.  So what that little junior, future Rhodes scholar or future president, it’s a blob.  Get rid of it.  Get rid of it.  Olmstead writes:

Schambra traces the history of “philanthropic” eugenics through the years, along with its roots and causes. [Mike: There’s some more on this part but I want to get to the end.]

The key, according to Schambra, is personal caritas (love). He writes:

“Loving personal concern is at the heart of charity traditionally understood. It can only be practiced immediately and concretely, within the small, face-to-face communities that Tocqueville understood to be essential to American self-government. There, the seemingly minor and parochial concerns of everyday citizens are taken seriously and treated with respect, rather than being dismissed as insufficiently self-conscious emanations of deeper problems that only the philanthropic experts can grasp.”

Mike:  In other words, you plebes out there doing charity on a local level, you’re just a bunch of ingrates that we would all be better off without.  Leave the charity to the experts and elites like Mrs. Clinton and Bill Clinton.  They’re the ones that really care about the poor, not you that are actually tending to them.  She concludes:

It is sad that the Republican Party, a political group filled with religious folk, often shows callousness toward the impoverished—either by refusing to help them, or by offering only conditional charity.  The Christian faith is filled with instructions to unconditionally love and help the unfortunate. [Mike: Then she quotes a passage from Isaiah.]

Notice that it doesn’t say, “Only cover the naked or feed the hungry if they aren’t being lazy.” God doesn’t say, “Undo the heavy burdens—unless they really need to work harder.” Neither does he say, “Make sure they show a change of heart or get converted before you help them.” This isn’t a gospel of cutting food stamps. Perhaps it is a gospel in which food stamps never should have been necessary in the first place. If conservatives—especially Christian conservatives—want to say “government should mind its own business,” then perhaps it is time they start minding theirs.

Mike:  Bingo!  Bammo!  Kaplowee!  I’ve talked about this over and over and over again.  I say over and over again, to me it seems like it’s over and over but perhaps not enough.  There is every likelihood that even if we had the greatest free markets in the history of free markets, there would still be people that would suck at free markets.  There would still be people that would be impoverished, poor, whether through the lack of their own initiative, sloth, mental or physical deficiency.  It wouldn’t matter.  There still would be those in need.  I often ask the question: What do you purport to do with them?  Not everyone is going to be saved by your supply-side economic theory.  You are missing out on the human component of charity and philanthropy that is not going to be cured by policy.

The only thing that would then remain is either A, the State has to pick it up and do it, which we don’t want, or B, there is then a return to that Christian form of republicanism that was practiced in those towns that Tocqueville would visit over and over and over again in the 1820s, ‘30s, and ‘40s, and write letters back to his buddies in France and say: Man, I can’t believe what these people do with their poor.  They actually care for them.  That’s what the lesson of that is.  To get out there and say that all we have to do is have the right economic policy by Paul Ryan or the right economic tax policy by Arthur Laffer or whatever and that lifts all boats, you‘re not thinking as a Christian and you’re not thinking as a human.  You’re thinking as an economist, as a scientist. 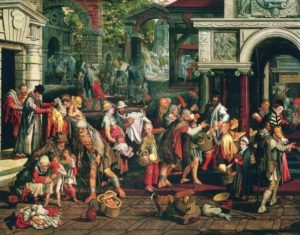