I composed the following meme to try and drive home the gravity of what is happening here and all over the world the Catholic Church once breathed the beautiful spirit of Our Lady’s modesty and beauty into. 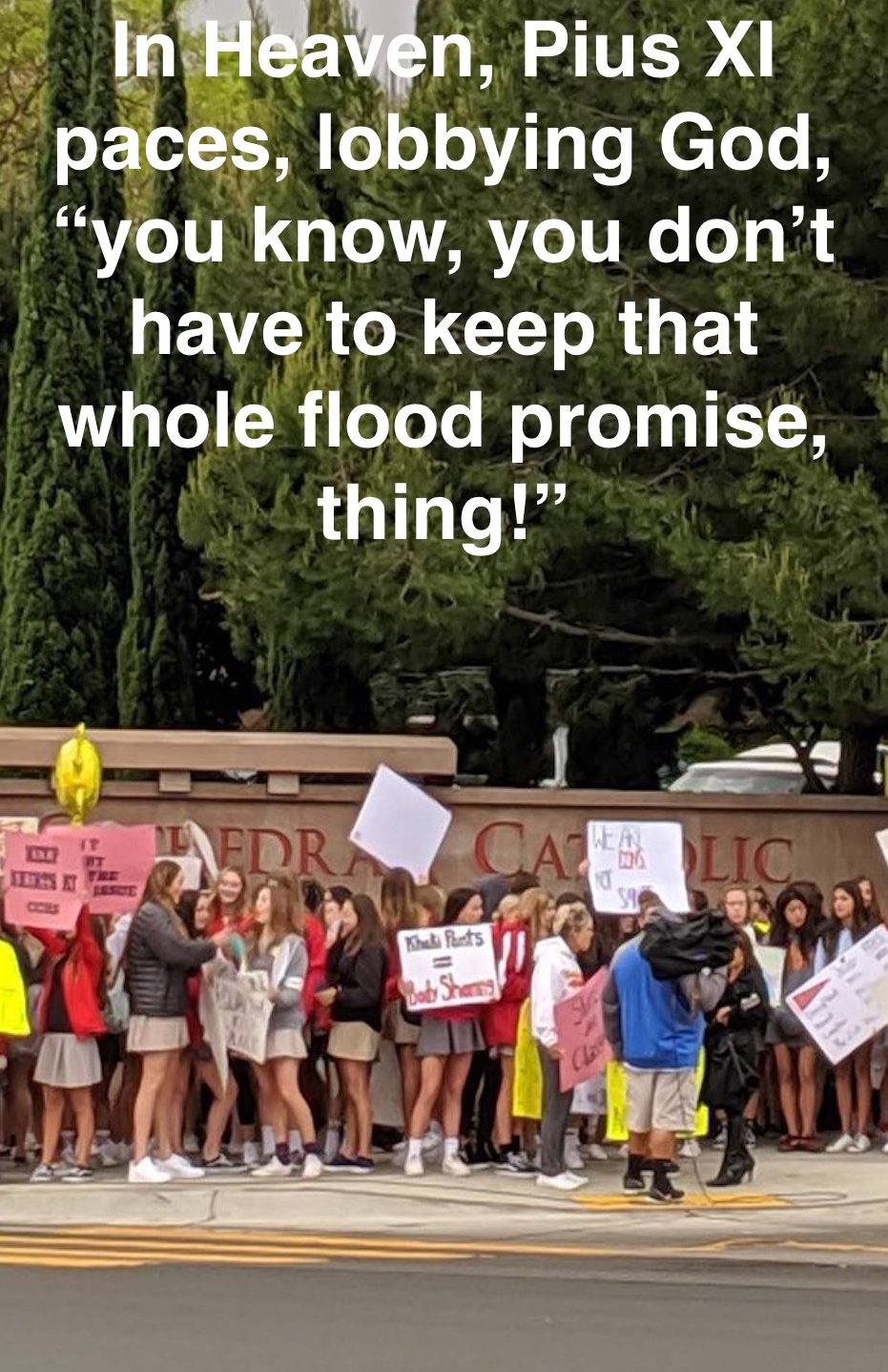 From the NBC affiliate, Channel 10 in Los Angeles:

After issuing “thousands of hours of detention” to students modifying the length of uniform skirts, a San Diego private school has made the decision to ban skirts from its dress code.

Students at Cathedral Catholic High School learned about the new rules in an email from Principal Kevin Calkins, Ph.D. on Friday.

After explaining how the faculty has attempted to address the issue in the past, Calkins informed parents and students that skirts will no longer be an option, noting that “Dress code is a perennial challenge.”

The school’s uniform worn by freshman Brenna Hansen who agreed to show NBC 7 the skirt length.
“Male faculty feel uncomfortable addressing female students about the length of their skirts, and even female faculty have expressed frustration with the ongoing challenge of dress code,” Calkins wrote.

One freshman student reached out to NBC 7 explaining that the decision has caused “quite an uproar on many levels.”

In response, the students have created a petition on change.org. As of Monday morning, 2,384 people have signed the petition.

THIS is the “dress” one student agreed to be photographed in for an NBC, Channel 10 Los Angeles story.

Pope Pius XI, seeing that immodesty of epic, pornographic proportions was snaking its way into society, on January 12, 1930 wrote and released his famous teaching against female immodesty:

In his introduction The Holy Father stated the  desperate need for Holy intercession on Catholic women’s then state of dress (in 1930!!!!)

Frequently, when the occasion has presented itself, the selfsame Holy Pontiff has reproved and bitterly condemned immodesty of dress pervasively introduced into use these days amongst Catholic women and girls, a thing which not only gravely offends feminine beauty and ornament, but leads most lamentably to the temporal and worse still the eternal ruin of these same women and unto the ruin of others still.

It is truly a shocking thing to behold, Catholic mothers defending their Catholic daughters wish to dress like street walkers and to then compound the error by defying the just authority of the school’s principal the daughters were voluntarily placed under the care of. Folks, this story screams “Beelzebub…. winning!”. As I have said a million times on The Mike Church Show:

The demons are ascendent.

They have come for the children.

And they will not take ‘no’ for an answer.

Mary-like fashions are designed to conceal as much of the body as possible rather than reveal it. This would automatically eliminate such fashions as tight fitting slacks or ‘jeans’, sweaters, shorts; shorts which do not reach down at least to the knees; sheer blouses and sleeveless dresses, etc. These Mary-like standards are a guide to instill a sense of modesty. Women and girls who follow these standards and who look to Mary as their ideal and model will have no problem of modesty in dress. She who follows these standards will not be the occasion of sin nor a source of embarrassment or shame to others. – His Holiness, Pius XI