If you want to know why theology is in such a mess today and secularism in such a position of strength, I would say that it has in large part to do with the fact that . . . [Mike: I already did that.]

He remembered in particular his courses in scholastic philosophy, which he went on to develop in his own later works . . . Wilhelmsen followed the shift away from this type of direct philosophical education that educators denigrated to a short-lived “great books” approach that later gave way to what we know today: mostly eclecticism and relativism. The result of this shift, he thought, led to an educational system where no real philosophy was taught or learned, only opinions.

Mike:  That’s exactly where we’re at today.  Opinion is actually taught now.  Relativism is actually the cause of opinion, because something is morally relative when it’s based in opinion, or it could be morally relative.  You could have an opinion on the utility of, say, using a hammer to drive a nail in as opposed to the flipside of an axe.  There’s a way to use the term properly.  Back to the Rev. James Schall, “Is Scholasticism Making A Comeback?”   You may be asking, again: Why does that matter?  If we’re going to straighten out this moral mess that we’re in today, we’re going to have to agree on certain dogmas.  We can’t agree on dogmas unless we conform our mind to reality that the natural world is guided by and directed by He who created the natural world.  If you can’t conform your mind to that reality, you’re going to be able to agree on the natural and eternal law.  If you can agree on that, there’s an awful lot you can agree on after that.

Wilhelmsen did not think everyone was an Aristotle, but he did not think they were dummies either. Graduates of Catholic colleges at that time were given a pretty good foundation, often with eighteen to twenty-four hours of philosophical courses required. These courses served these students well for the rest of their lives. It is not so much that anything is wrong with studying “great books.” We need and want to know what they contain.

But by themselves, they contradict each other. So without a foundation in philosophy itself, students of “great books” ended up in relativism with no real way to understand and defend the truth of things. Multiculturalism and diversity, among other fads, become substitutes for thought.

Mike: Folks, my favorite thought on multiculturalism is the one that comes from the great writer Mark Steyn, who said that multiculturalism basically posits that there is no culture.  Multiculturalism says that every culture is relevant, and that one culture is as good as another.  If that’s the case, then there really is no culture then.  Certainly there can’t be anyone that is distinct from one another because they’re all equally distinct.  All cultures are true today.  Every diversity is valid.  It’s like saying the cult of cannibalism is just as valid as our cult.  That’s provided that we actually have one, and we don’t.  Well, our cult serves up the likes of Lena Dunham on the HBO TV show Girls.  By the way, if you click that link, know that the photograph on the page is censored.  If you click through a couple more times, you’ll get to the uncensored version, just fair warning.

Indeed, these theories become enemies of thought because the noble name of truth is eliminated from the philosophy curriculum as a “prejudice” or “arrogance.”

All of this background comes to mind on reading Edward Feser’s remarkable book Scholastic Metaphysics. As Feser himself amusingly notes, his colleagues refer to his book as “Feser’s Manual.” It is that in the very best of a noble tradition that was in fact concerned with educating the mind so that it would know the truth of things. What this book does, and does very well, is give us an insightful introduction to metaphysics . . . 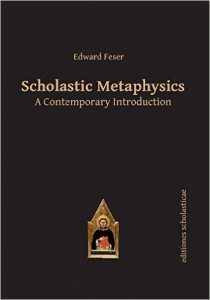 All of this treatment, of course, involves coming to terms with Scotus, Occam, Suarez, Hume, Descartes, Hegel, Kant, and the whole effort of modern philosophy to explain what happens in the world. It is often said that the wars of the world are first carried out in the minds of the dons debating what appear to be obscure points of philosophic doctrine. We might wonder what difference do these questions about substance and accident, act and potency, causality, being and existence make? The fact is they make all the difference in the world. Aristotle’s famous remark that “a small error in the beginning will lead to a huge error in the end” is clearly at work in Feser’s approach. He understands what is at stake when we fail to account for the world that is. [Mike: Then we get some more on the book. We’ll skip forward ahead.]

Edward Feser’s Scholastic Metaphysics is an ordinary “manual” that is not ordinary. It is nothing less than a defense of reality, of the capacity of the mind to know what is. It is a book that puts science in the right place because it has the mind in the right place. Who else can teach us the real excitement that is metaphysics? “The best explanation of why the world works just the way it does is that there is something in the very nature of potency that requires actualization by something already actual—that is, the best explanation is that the principle of causation is true”.

Mike:  You may be going: This is deep.  Mr. Church, please, this is a talk show.  We can’t get things like philosophy in a talk show.  I can explain to you why this matters.  How many of you have ever gotten into an argument with someone that thinks they have the upper hand and they’re the only ones that have access to knowledge and truth?  Then they wish to make their point using what is called a hypothetical.  [mocking] “Let me give you a hypothetical.  Answer the question on this hypothetical.”  Your response in most instances should be: No!  Why should I answer a hypothetical when we can apply the same question to reality?  Hypotheticals have not occurred.  Reality has and is occurring.

To get into organizing your thoughts based around hypotheticals, which is what our governors do today – It’s what our political class does today.  It’s what our academic class does today.  All thought today is organized around hypotheticals instead of conforming your mind to reality and conforming your mind to the reality of the created world, and that the created world requires a creator, and that a creator who we have not seen requires faith, and that that faith then requires and gives to us a creed by which we can explain the creator, and also explain what the creator has revealed to us.  This is what is known as revealed truth.  If we know revealed truth, if we know the creator, and if we have the faith, then we can conform our mind to the reality of the creed.  If we conform our mind to the reality of the creed, we’ll have no problem studying scholasticism because we will thirst for the idea, for the principle on how to think and organize our thoughts so that our faith is increased, nay, our faith is made stronger and more impervious to error.  Hypotheticals lead to errors.

Here’s Father Schall explaining what I just explained to you, but he explains it in writing:

It is a book that puts science in the right place because it has the mind in the right place . . . “The best explanation of why the world works just the way it does is that there is something in the very nature of potency that requires actualization by something already actual—that is, the best explanation is that the principle of causation is true”. . .

In Feser’s little “manual,” we have the seeds of something great, the realization that, on philosophical grounds themselves, the scholastic tradition in the heritage of Aristotle and Aquinas is in fact the newest thing in academia. The only people who do not know this are likely to be academicians, but they are often out-of-date. We need, as I have often said, to go to the books that tell the truth, not only tell it, but know what it is on the basis of reason and argument. This book on “scholastic metaphysics” is precisely one of these books. If professors do not assign it, let the student read it by himself. If the department won’t consider it, go elsewhere to find someone who will. For we sense that, in our increasingly decadent culture, there is light in the darkness, a light that has been burning all along in obscure texts that a small but growing number of scholars like Edward Feser thought worthy to read.

Mike:  So, is scholasticism making a comeback?  Yes, it is.