Mandeville, LA – Exclusive Audio and Transcript – We have two callers today inquiring about Religion, God, The Pledge of Allegience, and the First Amendment.  These two are so… er, misinformed, shall we say. “How misinformed are they?” That we had to split them up into two posts because one post just couldn’t handle it. And let’s not forget that they’re calling in about Mitt Romney’s “I can pledge better than Obama” statement, so the bar was already set pretty low for them.  Check out today’s transcript and audio…

Mike:  Michelle in New Jersey, you’re next up.  How are you?

Caller Michelle:  How are you, Mike?

Caller Michelle:  I’m one of the callers from before about the Pledge of Allegiance with God in it.  I’m not religious or anything, but you have to keep the word God in there.  God is the one word that makes us the human element in the pledge.  If you take the word God out, basically you’re pledging to a republic.  It could be a republic of government.

Mike:  It is a republic of government.

Caller Michelle:  Yeah, but I’m saying it almost sounds like a socialist kind of government.  If you take the word God out —

Caller Michelle:  I don’t have it backwards.

Mike:  Yes, you do have it backwards.  The socialist is the guy that wrote the pledge.

Caller Michelle:  The way I understand it is we have these inalienable rights, and I believe that as God gave us those rights.  If you take God out, then you’re basically pledging to someone without a God.

Caller Michelle:  I don’t think so, but it’s just something, you’re in this great country and you’re just showing respect for it.

Caller Michelle:  It’s funny you say that.  When I was a kid, I would never say the Pledge of Allegiance because I didn’t believe that I should be pledging to somebody other than myself or my own ideas.  When you get older, you realize that you need some kind of formation or balance in your life.  You have this great country that you’re living in and we need to respect that.

Mike:  You need to respect the great country that doesn’t respect you.  That’s interesting.  How about this?

Mike:  Oh, for crying out loud.  AG, do you have a violin?  Get me a violin.  Here we go with this all started with Obama.  The wheels came off with Obama.

Mike:  It started with Hamilton.  It started with the misstated goal of the Federal Convention of 1787.  That’s where it began.  Try this one on: I pledge allegiance to liberty, the greatest of all earthly blessings, in whose defense I will risk my life, my fortune and my sacred honor, and in whose service government must always remain.  May God protect liberty in the People’s Republic of Louisiana [insert your state here] and across the United States.  How about that?

Caller Michelle:  Yeah?  How about it?

Mike:  That was proposed by the gentleman that wrote the piece about the Pledge of Allegiance coming from socialist, Baptist minister Francis Bellamy.  I didn’t even seek to engage anyone in this silly conversation about loyalty oaths to a country that currently disrespects me and you with every fiber of its being and with everything that it does by continuing to rack up unimaginable debts in my name, your name, my children’s name and your children’s name.  I didn’t even mean to bring that up.  I simply asked the question what is this, a contest between men that can say the pledge better, between Governor Romney who, apparently he’s succeeding, wants people to think that his devotion and fidelity to his God and his recitation of the pledge is better than the other guy’s?

Governor Romney:  I honor my promises.  One of those promises was the one that I made and the ones that I made in the Pledge of Allegiance.  I believe it’s important to have a president, and I will be a president if elected, that honors that pledge and all the pledges that I make.  That pledge says that we are a nation under God.  If I am President of the United States, when and if I become President of the United States, I will not take God out of my heart, I will not take God out of the public square, and I will not take it out of the platform of my party.

Mike:  We covered this last week and we’ve covered this before with the insertion of God in the platforms and the big hubbub over this.  It is undeniable that a reading of history as it was recorded by contemporary sources in the 1780’s and 1790’s and all the way through the end of the lives of the men that you call founding fathers that the guys that wrote the First Amendment would wholeheartedly and fundamentally disagree with that.  You never would have heard that in the public square.  It wouldn’t even have come up in the public square.  Today, I guess it’s something that we base a vote on.  He says the pledge better?  He’s going to hold God nearer in his heart than Obama?  Do you know Mitt’s God, Michelle?  Do you know him?

Caller Michelle:  No, but doesn’t the Obama people want to take God out?

Mike:  Take it out of what?  Isn’t it their choice?

Caller Michelle:  Out of everything.

Mike:  Wait, isn’t it their choice?

Caller Michelle:  Isn’t Obama the person that doesn’t like religion, that when he goes to  —

Mike:  Not according to him.  Who are you talking to?  According to who?

Caller Michelle:  I’m reading up on it, that’s what I’m doing.  That’s what everybody should be doing.

Mike:  Right.  Okay.  So the pledge and the God — do you know the God of which Mitt speaks?  Are you familiar with the Mormon God?

Caller Michelle:  But that’s what I’m saying.  It doesn’t matter which God.  It gives everybody their own —

Mike:  Why doesn’t it matter if Obama is an atheist then?  He’s choosing a God.  He’s choosing to believe that there is no God.  You can no more disprove that than you can prove that Mitt’s God is viable and for real, can you?

Caller Michelle:  I don’t know if he’s an atheist and I don’t care.

Mike:  You said he was removing God.

Caller Michelle:  Yeah, he was.

Mike:  Okay, maybe he doesn’t believe.  That’s why I said that.  I’m not saying that he does or does not, but if he’s an atheist, meaning he doesn’t believe in a God, then he is making a statement that his belief is that this all came from the big bang or whatever the case is.  That is no more disprovable than, I’m to assume, your belief or Mitt’s belief that it came from the Mormon God, is it?

Caller Michelle:  I agree that that is more of a problem right now.  It just bothered me because once you start taking God out of things, then basically what you’re doing is you’re taking the human part of the United States out.  It’s almost like God is a symbol for the inalienable rights we have.  Everybody has their own belief, so once you take that out, you’re stuck with this government and whatever government rule it is.

Mike:  But the First Amendment took it out.  You’re putting something there that wasn’t there.  It was intentionally taken out.  It was done by design so there could be, number one, no religious test for an office, which is actually in the Constitution, and number two, so that you wouldn’t have people preening about, campaigning about whether or not your God and your embrace of said God is better than somebody else’s God.

Caller Michelle:  I don’t think people see it like that.

Caller Michelle:  I don’t see it like that.  I just see it as what I just said.  I just said it’s everybody’s right to have their own beliefs and that’s what that symbolizes.

Mike:  So putting God on the money, as James Madison viscerally opposed, that is part of our belief?

Caller Michelle:  No, it’s part of your right to believe.

Mike:  Why isn’t it part of someone else’s right to not believe?

Caller Michelle:  It’s the whole reason why we have a capitalistic society, because people get to have their own beliefs and nobody can take those beliefs and freedoms away.  That’s what the word God symbolizes.

Mike:  Oh, dear.  What does capitalism have to do with it?  By the way, when you people out there talk about this talk radio speak that I just heard, this capitalistic society, you do realize you’re talking Marx.  There’s very little talk of capitalistic societies prior to Marx pioneering this and Marx getting people to talk in terms of capitalism versus its antithesis.  What may have been spoken about is free exchange, free enterprise.  They may have said mercantile system.  If there were currencies, they may have said a paper system.  They would not have said capitalist system.  This is another God.  You’re worshipping the God of the capitalist system, aren’t you?

Caller Michelle:  Listen, all I’m saying is that we should have –

Caller Michelle:  The people, us, America.  We should have our own ideas and liberty and freedom.

Mike:  Where does America end?  At British Columbia all the way to Cuba or is it just the people that are lucky enough to be inside our God-granted and God-blessed borders?  Or does it extend all the way down to Mexico?  America is a big continent.

Mike:  Very soon, some of us are going to be trying to get out.

Caller Michelle:  That’s true, too.  If it stays on this course, yeah, we’re going to be getting out.  Everyone is trying to get in here.  Why?  Because we have freedom of expression, freedom of religion — 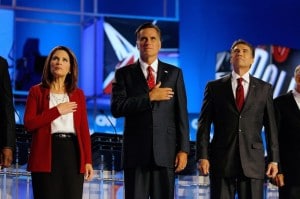 Do these people realize that the original pledge did not have “under God” in it?! The Knights of Columbus fought to put that in there. As a Knight of Columbus, myself, I don’t say the pledge at our meetings & look forward to someone asking me why not haha