Mandeville, LA – Exclusive Audio and Transcript – Mitt Romney is using his success at Bain as the reason as to why he would make a good chief executive, so why shouldn’t people knock him for it?  But you know what really matters? The one and only thing that matters in this election? The Constitution. Does Romney have any experience in defending it? Where is his résumé when it comes to defending liberty?  Check out today’s audio and transcript for more…

Caller Scott:  Thank you, Mike.  Indulge me, King Dude.  I’m really frustrated.  I do not mind anyone criticizing a Republican or a Libertarian candidate for president or any office.  I don’t mind it.  Let’s have a good discussion and debate their shortcomings.  How come no one ever applies the same standard for scrutiny against President Obama?  He has no accomplishments.  No one can articulate an accomplishment, let alone in the free market or with the economy.  People that run against him, somehow they’re inferior without ever applying the same standard to him.  I just don’t understand it.

Mike:  What standard is it that’s not being applied to Obama that you want applied?

Caller Scott:  When I hear someone criticizing or questioning the ability of Mitt Romney to handle the economy, when you have someone that’s never participated in a non-governmental economy, I just don’t understand that.  He’s never run a lemonade stand and somehow we’re going to criticize Romney?  Unbelievable.

Mike:  It’s not unbelievable.  That’s Romney’s claim to fame.  That would be like we shouldn’t be criticizing Roger Clemens because of his pitching.  We should only be talking about his hemorrhoids.

Caller Scott:  I disagree with that.

Mike:  He’s using the Bain success as his — he’s using his résumé as the reason why he’s going to make a good chief executive.  I think it’s perfectly natural for people to criticize or analyze that record.  Where’s the shortage of people analyzing?  This is what amazing me, Scott.  You’re not really sitting there waiting for Diane Sawyer to bow up on Barack Obama, are you?  You’re not really waiting for George Stephanopoulos or Ashley Banfield to bow up on Barack Obama, or hell, Bill Clinton or name your dumbocrat here.  To me, the insanity is expecting that there’s going to be a change in what is known as mass media.  That’s just not going to happen.  Why worry about it?  The other amazing thing to me is that everyone that picks up on the bias in the media assumes that his neighbor is a dumbass and they don’t pick up on it and they’re too stupid to see that there’s a bias there.  How could you not see it?  You follow me?

Caller Scott:  I follow you.  I just think that it’s absurd that no one mentions the lack of experience and accomplishments of our president.  I think that leads to —

Mike:  He does get mentioned.  Have you ever heard of the Fox News Channel?  Have you ever listened to talk radio when I’m not on the air?  It gets mentioned every day, over and over and over.  Hell, I mention it.  I just happen to have a difference of opinion.  I don’t give a rat’s furry behind what some man’s business experience is.  You know what I’m going to do, Scott?  Here’s what I’m going to do for you.  [thumping on mic]  Do you know what that is?  That’s the sound of me smacking a pocket Constitution against the g-damned microphone.  That’s what I care about, Scott, right there.  Why don’t you care about that?  I don’t care about Mitt Romney and Bain freaking Capital.  I care about this. [thumping on mic]  Veto the damn bills you’re supposed to veto.  Get us out of the wars that aren’t declared.  Make my currency sound.  Go to bed, Mr. Romney.

I’m so sick of this.  That’s it.  I quit, AG.  I’m walking out right now of hosting the show.  That’s it.  I’m done.  What is this obsession?  You people are neurotic.  You are neurotic.  [mocking] “We have to have our Republican guy in here, dammit.  We’re going to prove once and for all that we’re better at managing economies than Democrats are.”  Maybe you both suck.  You know who manages an economy really well?  Successful business people and people that suck at business, because they show people how not to do it in business, that’s who manages an economy, not a president.  I don’t care what Romney’s experience is.  I don’t care what Obama’s experience is.  Every economic thing that Barack Obama has done, sir, could have been prevented by this [thumping on mic].  It could have been prevented by that.  He had no authority and no power to do any of it because of this [thumping on mic], not because he ran a lemonade stand or didn’t. 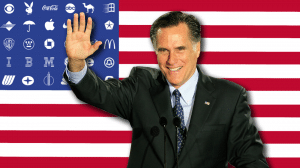 0Shares
baineconomicsexperienceObamaromney
Previous PostGas Consumption and Petroleum Use Hit 20 Year LowsNext PostJudge Napolitano: Welcome To My World-The Sheople Do Not Care About Their Civil Liberties

The sad thing, some people don’t get the bias on the news. It hurts my head when I meet these people. Awesome rant.

That is the best rant that I have heard in a while. Magnificent! Thanks Mike for putting into words what an ever growing group of [r]epublicans feels.