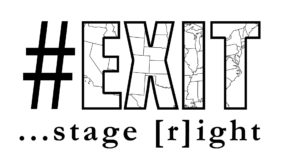 Mandeville, LA – Exclusive Transcript – “In 2017 America, in the era of Trump, you’re not allowed to say this.  You’re not supposed to say this.  If you say this, then you find yourself opposite of people that are going to have an other historical point of view.  That’s Douthat’s point.  Why does this matter?  This matters to modern man because modern man is not defined by the story of the apostles.  I can’t put it any more clear than this.” Check out today’s transcript for the rest….

Mike:  Back to Ross Douthat.  He’s asking this question here: What is America today?  These people that are Trumpists, what defines them?  The answer is going to surprise you.

As late as the 1960s, liberalism as well as conservatism identified with these particularisms, and with a national narrative that honored and included them. [Mike: I’m not going to go back and reset this because it would take me too long. Download the first hour of today’s program as a podcast and all will become apparent.] The exhortations of civil rights activists assumed a Christian moral consensus. Liberal intellectuals linked the New Deal and the Great Society to Thomas Jefferson and Andrew Jackson. Pop-culture utopians projected “Wagon Train” into the future as “Star Trek.”

Then for a variety of reasons — a necessary reckoning with white supremacism, a new and diverse wave of immigration, the pull of a more globalist ethos, the waning of institutional religion — that mid-century story stopped making as much sense.

In its place emerged a left-wing narrative that stands in judgment on the racist-misogynist-robber baron past, and a mainstream liberal narrative that has room for Lin-Manuel Miranda’s Alexander Hamilton (as opposed to the slightly more Trumpish genuine article) and Emma Lazarus, but feels unsure about the rest.

But meanwhile for a great many Americans the older narrative still feels like the real history.

Mike:  What’s the older narrative?  The older narrative is manifest destiny.  The older narrative is that men that came here were Americans and were supposed to come here, and we were supposed to conquer the Indians.  After all, they were a bunch of barbaric, cannibalistic savages, and hey, some of them were – see the film Black Robe for some details on that – and that all these things were supposed to happen, and that we’re supposed to be one gigantic blobistan.  From Bangor, Maine all the way down to Baja, California, from Spokane, Washington all the way down to Key West, Florida, we’re all supposed to be in one giant blobistan together.  That’s just the way it was intended by God himself, so says the historian David Barton and the founding fathers charted us a course to get there.  [mocking] “They gave us, Mitter Church, the Constitution, which was a Judeo-Christian document” and only good for the government of a Christian, moral people, said John Adams.  What if that narrative is a pile of hooey?  What if that narrative itself is incorrect?  That’s really what’s at issue here. 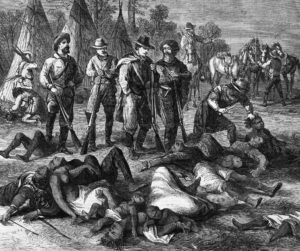 People call them revisionists.  If someone claims that there was – if someone claims that there’s another narrative, and that is that evil, despicable, diabolical white people came here specifically to be freed from minorities, or whatever the case may be, and that when minorities finally made their way over here in the form of Africans, what did they do?  You guys are inferior to us.  We’re white, you’re black; we’re supreme, you’re not.  They enslaved them, or they captured them over in Europe and brought them over here and enslaved them.  Which of the narratives is correct?

In 2017 America, in the era of Trump, you’re not allowed to say this.  You’re not supposed to say this.  If you say this, then you find yourself opposite of people that are going to have an other historical point of view.  That’s Douthat’s point.  Why does this matter?  This matters to modern man because modern man is not defined by the story of the apostles.  I can’t put it any more clear than this.

But meanwhile for a great many Americans the older narrative still feels like the real history. They still see themselves more as settlers than as immigrants, identifying with the Pilgrims and the Founders, with Lewis and Clark and Davy Crockett and Laura Ingalls Wilder. They still embrace the Iliadic mythos that grew up around the Civil War, prefer the melting pot to multiculturalism, assume a Judeo-Christian civil religion rather the “spiritual but not religious” version.

Mike:  How many times have you heard that?  You a believer?  [mocking] “Well, I’m spiritual but I’m not religious.”  What does that even mean?  I’ll tell you what that means.  In other words, I reject the authority of your god and instead I’ve chosen my own. I call them Baal and Baphomet and Satan and Lucifer and a couple other hideous names, but they’re all out there.  If you don’t choose The Holy Spirit – what’s the old adage?  Those that stand for nothing will fall for anything.  If you’re spiritual but you’re not religious, what spirit is it that you’re communing with then?  Who are you talking to?  I can tell you sometimes they manifest themselves as aliens.  Some people say, [mocking] “Mitter Church, no, they’re extraterrestrials.  Do not rain on my Roswell parade.  That’s it.  I’m turning you off.”  That thing about that “I’m spiritual but not religious,” do you really want to hang out with someone who’s spiritual and not religious, taking the risk that what spirit they may be conversing with? Back to Ross Douthat: 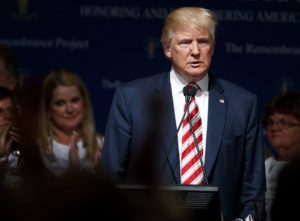 Trump’s ascent is, in part, an attempt to restore their story to pre-eminence.

Mike:  What’s the story? The story is the pastoral one.  The story is that the Americans that settled here, everything that has been done in fantasyland American history has been for the good, that Americans have done nothing wrong, including the trail of tears.  It was always our destiny to take over and populate and settle and civilize the entire continent, even parts of it that people didn’t want to give up because they were here first.  Too bad.  Slavery happened.  That was an accident.  It wasn’t meant to happen, it just kind of happened that way.  You can’t blame people.  You can’t blame people for not wanting to pick cotton in 104-degree heat in Southeast Louisiana.  Come on.  In other words, all this can be justified.  Using moral relativism you can make all this worthy and pastoral.  Even the bumps and bruises and warts and canker sores parts of history, just paint over them.  What’s the common refrain?  Did I own any slaves?  Answer the question.  Did I own any slaves?  Well, then, it’s not my fault.  I don’t know.  Do you continue to think that the ownership of slaves was bad?  Are you spiritual but not religious over it?  Back to Ross Douthat:

Trump’s ascent is, in part, an attempt to restore their story to pre-eminence. [Mike: That’s the story of the knuckle-dragging, white, Neanderthal, hick, hayseed, homophobic, racist bigot of middle America. That’s the less characterization. I’m just giving you the characterization.] It’s a restoration attempt that can’t succeed, because the country has changed too much, and because that national narrative required correction. The myth of the “Lost Cause” had to die, the reality of racial wrongs required more acknowledgment, the Judeo-Christian center had to make room for a larger plurality of faiths.

Mike:  There’s your error right there.  That assumes then that if you make room for plurality of faiths, again, logical thinking here would tell us that all faiths are created equal.  That would then mean that all gods are created equal, including the god of Allah, the god of the Hindus, the god of Buddha, and all the rest of them.  Do you really believe that?  Do you really want to slander and commit blasphemy against the one true God?  If you know who he is, then you know you can’t do that.  You shouldn’t.

But so far we haven’t found a way to correct the story while honoring its full sweep — including all the white-male-Protestant-European protagonists to whom, for all their sins, we owe so much of our inheritance.

Instead liberalism, under pressure from the left, has become steadily more anxious about its political and cultural progenitors, with Woodrow Wilson joining Jackson and Jefferson in the dock. Meanwhile the right’s narrative has become steadily more exclusionary — religious-conservative outreach to Muslims has given way to Islamophobia, racial optimism has been replaced by white resentment.

Mike:  Here’s where this stuff just goes off the rails.  It is not Islamophobic to call Islam the heresy that it is and to be mortally afraid, terrified that you may have to live under it.  Do you know how

many hundreds upon hundreds of thousands of Christians from the 7th century all the way to the 18th were either impressed by the Muslims, were forced into either converting, and if they wouldn’t convert being executed, and if they didn’t want to execute them, being impressed as slaves, hundreds upon hundreds of thousands.  There is ample history and ample example from the historical record that says that Islamophobia is not Islamophobia at all.  You might as well call it evil, sinophobia.  You might even call it morteophobia, the fear of death.  Again, if the Muslim god is equal to the Christian one and must be acknowledged as such, then all is already lost.  You’ve already lost.  You’ve already set your civilization on a path to blasphemy.  Do you think Almighty God is going to bless that?  No.  You’re going to get the chaos that we have today.  Back to Douthat.  I think his conclusion is worthy of discussion.

Maybe no unifying story is really possible. Maybe the gap between a heroic founders-and-settlers narrative and the truth about what befell blacks and Indians and others cannot be adequately bridged.

But any leader who wants to bury Trumpism (as opposed to just beating Trump) would need to reach for one — for a story about who we are and were, not just what we’re not, that the people who still believe in yesterday’s American story can recognize as their own.