Mandeville, LA – Exclusive Transcript – So I have this story about how northern, rural Colorado is overrun and is going to get steamrolled by progressives that have invaded parts of northern, rural Colorado and the rest of Colorado and it’s over.  If you go out there and say you don’t like killing babies, those progressives are going to run against you and Terry McAuliffe you.  They’re going to Ken Cuccinelli you and you’re going to lose.  That’s the upshot of this story here.  Check out today’s transcript for the rest…

Mike:  So I have this story about how northern, rural Colorado is overrun and is going to get steamrolled by progressives that have invaded parts of northern, rural Colorado and the rest of Colorado and it’s over.  If you go out there and say you don’t like killing babies, those progressives are going to run against you and Terry McAuliffe you.  They’re going to Ken Cuccinelli you and you’re going to lose.  That’s the upshot of this story here.  If they can go in and take over rural states like Colorado, guess what, buddy?  Let me tell you people in Texas something: They’re coming for you next.  The gay marriage loving abortionistas are coming your way next.  Gird your loins, Texas.  No rural landscape will escape the scourge and virus and plague that is progressivism because it’s the wave of the future.

I read this and go: How much more progressivism can humanity endure?  What is left for you progressives to do?  You’ve already killed 200 million in the name of progress.  We’ve already had a holocaust of nearly an entire race or ethnicity in Germany in the 1940s, all in the name of progress.  We’ve had a similar occurrence here in the United States as upwards of 50 million Americans were not born and awarded birth certificates because of this ghastly, progressive eugenics procedure called abortion.  What is left for you to do?  What’s going to be your crowning achievement?  Will you nuke someplace out in rural America that you find is distasteful or displeasurable?

Folks, it’s apparent that the progressive virus is not going to rest until — it’s like the bubonic plague.  The bubonic plague finally and ultimately killed itself, as I understand it anyway.  It had preyed upon humanity to the point where either it wasn’t fun to do it anymore, and since it was a virus I doubt pleasure and recreation were part of its ethos, but it preyed upon humanity to the point where it basically burnt itself out, or some kind of an immunity built up to it and it just kind of went away.  That’s what’s going to happen to this scourge, to this era in which we have lived which began with the enlightenment, saw its crowning achievement with the elevation of Jean-Jacques Rousseau in France, and it’s been all downhill ever since.  As they say, folks, this, too, shall come to an end.

Meanwhile, you have to enjoy or be outraged by the implication that even country folk are going to be co-opted.  Not even the country folks, not even the salt-of-the-earth types are safe.  In other words, goodness, truth and faith cannot endure and will not endure the virus that sweeps the entire continent.  If we were to delve into “Colorado Secessionists Struggle as Trend Lifts Democratic Votes, this is what you will find.

If I’m to believe a report in Bloomberg last week, none of you counties are going to do this because you have seen the error of your ways, you know that you should not be so bellicose in your attitude and in your relations with your well-intentioned, thoughtful, compassionate, loving, understanding, kind, and only-looking-out-for-your-best-interest neighbors in southern Colorado.  After all, they just want to help you spend your money more wisely.  They just want to help order your social lives more in line with theirs, that’s all.  They just want you to use your weapons for something other than self-defense, like giving them back to the state in exchange for sneakers.  In other words, they just want to help.  They also just want you to not have the kind of affordable electrical energy that you’d like to use in your houses.  They want you to have to use the marvels of modern technology and use coal.  It’s okay to use coal, but only use it to one-third of its potential, because using it at its full potential, it’ll smoke in here like volcanos.  We don’t want that to happen.

So, you northern Coloradans clinging to your hokey religious faiths and to the size and caliber and quantity of your weapons and firearms, clinging to the idea that every fifth baby conceived in the United States is worthy of extermination in its mother’s womb, your better parts in the southern part of Colorado only want what’s best for you, you noxious, racist, ranching and farming hick, hayseed losers.  Whatever you do today, don’t go to the polls to vote for independence like your forefathers did.  Go to the polls to pledge your undying, never-ending devotion to your better masters in Denver, Colorado.

Tonight, announcers on MSNBC and NBC and CBS will tell everyone just how progressives and good a people you are.  They will tell everyone just how wonderful it is that you saw the light and you eschewed the evil, despicable word that is secession.  That’s right, treat the “S” word like you’re the hobbit-looking character in the Lord of the Ring, [mocking] “My precious!  My secession!”  Treat it like the plantation-coddling, slave-trade-inducing word that it must be, because that’s what the Southern Poverty Law Center said that it is.

Northern Colorado, it all falls on your shoulders today.  Tonight, we shall see whether or not American men or women are even capable of holding the thought that even in their own state they’re allowed to declare their own freaking independence.  We’ll find out tonight, won’t we?  I’ve only called out about 185,000 times for voices from northern Colorado to weigh in on this.  I think I’ve spoken to exactly three of you in six months.  I would be delighted to double that number. 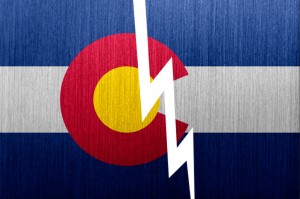 0Shares
abortioncoloradoCuccinellidemocratseugenicsholocaustmainstream mediaNorthern ColoradoplagueProgressivesprogressivismpropagandareligionRepublicansrousseausecedeSecessionTexas
Previous PostParty Politics Get Stronger And Stronger, Leaving The U.S. Vulnerable To Warring Factions And SeparationNext PostIf You Like Your Gumbo, Then You Can Keep It